Barzani’s Error and the FDS Victory in Rakka 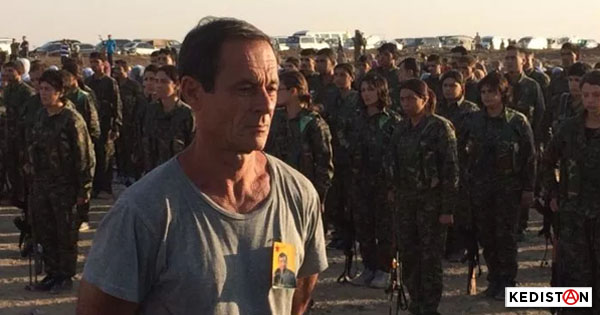 Following the failure at the attempted independence in Southern Kurdistan (Irak),the day after the official announcement of the fall of Rakka, and between two of his trips, Patrice Franceschi granted us an interview on the situation of the Kurds in Irak and in Syria.Writer, sailor, explorer, originator of several humanitarian expeditions, Patrice Franceschi has been at the side of the Syrian Kurds since the beginning of the confrontations.

Patrice Franceschi: “The Kurds of Irak or elsewhere have full legitimacy for organizing an independence referendum on their territory, given the oppressions they have lived through. But legitimacy is not enough. You must also have a political outlook, a pragmatic approach and this was undoubtedly not the right moment. Everyone asked Masoud Barzani to push back the date of the consultations even if he said independence would not be announced on the day following the results. He made a tactical error. In my opinion, it is due to his great isolation. An isolation that is both geographical – he lives locked inside his castle, so to speak – and intellectual. He is surrounded by advisors who do not supply him with credible information on the world as it is: for instance, people such as Bernard Henri-Lévy make him believe he is not isolated, that the legitimacy of his move garanteed its success.He is now paying the price of a serious political mistake.

Neither the North-Americans nor the French approved the holding of this referendum. They wanted it pushed back. Barzani can now measure the consequences of his stubbornness. In the end, the Iraki Kurds lost portions of their territory. Iraki Kurdistan is very different from that of Syria. Its politicians are corrupt. Over the past twenty years, money has become the dominant value. The political class has lost its initial integrity. The peshmergas do not have the same fighting spirit as do the YPG fighers. We know, for example, that they left the Sinjar without fighting ISIS.”

THE DIFFERENCE WITH THE SYRIAN DEMOCRATIC FORCES

Patrice Franceschi: “Today, the power of the Syrian Democratic Forces (FDS) rests on their ability at including the greatest number of people into a common project. This is very different from what is happening in Iraki Kurdistan. The FDS project is truly on the move. In Rakka, as in all the territories they control, in the seats of power, all parts of society are represented. The Kurds of course, but also the Christians, the Arabs, the Yazidis, the Turkmen.

A long road lies ahead nonetheless in order to integrate all the social components into the concrete realization of a political project. But the will to avoid excluding anyone is a real one. And when you work with them, you get very tired… in a positive way, when you realize the huge efforts they put into appeasement and convincing everyone. Notably the Arab populations with whom they don’t always agree. On the question of secularism, for one. Plus, on the ground, the Arabs are sometimes a handicap. In Rakka, they pillaged the town and the YPG had to intervene to stop them. The Arabs are less disciplined, less combative and the notion of a democratic federation, respecting minorities and man-woman equality, strikes them as very strange. The Kurds try to maintain a friendly pressure sufficient to convince them to change their mentality and contribute to setting an example for the rest of the Middle East.

I’ve been living this reality for the past five years and these last months in Rakka have been the hardest. So I’m relatively optimistic but one can’t exclude the possibility that, depending on the balance of power, the Arabs might turn against the Kurds at some point. The Kurds are aware of this. Co-habitation is a risk. Once the border zone of Deir Ezzor will be reconquered, Arabs will constitute the majority in the liberated territories.”

THE CIVILIAN COUNCILS WILL WORK

Patrice Franceschi: “Their policy of civilian councils works fairly well. There’s the notion that military campaigns aren’t enough to win the peace and that peace must be prepared before the end of war. Integrating civilians into a political process, deciding who will do what, who will handle what, what must be decided right away. As I was able to see, it worked very well in Membij. Also in Tal Abyad (or Gere Sipi in Kurdish). I saw all kinds of people in the Rakka civilian council. But it won’t be simple because they’ll need to negotiate with the tribe chieftains. Still, I think it should work. As evidence, up until now, there’s been no civil war. Even in the zone with an Arab majority such as in Tal Abyad, people have accepted co-habitation and co-management because the Kurds have strength on their side. We mustn’t settle for illusions. If the Kurds were weak, the Arabs certainly wouldn’t accept them.

The Kurds are doing a very good job of playing the population integration card. It’s very risky but very smart. It’s the best method but they are aware of the risks because those who don’t join the political project aren’t always the funniest of guys.

Beyond the region, the Kurds’ capital of sympathy is starting to pay off. They’re no longer looked upon as just another geopolitical component but as a people with an interesting project that may serve as an example for other peoples in the Middle East. Unfortunately, Turkey first and foremost but also Iran and Saudi Arabia work at keeping this democratic process away from its goal. Yet, the Kurds of Syria have garanteed that, should they get support, they would not serve as a rear base for an attack on Turkey. If the Kurdish question in Syria is uncoupled from that in Turkey, the autonomous Kurdish region of Syria will be able to exist. If it is not uncoupled, it will be a lot more complicated.”

NEGOCIATING WITH THE REGIME?

Patrice Franceschi: “At the international level, the Kurds are capable of dialogue with France, the United States, Russia, in short, with everyone, in order to explain that their project is a pluralistic one. It is the only one that can bring back peace.

The Syrian minister of Foreign Affairs,Wallid Boualem, has opened the door to negotiations. He did it simply because he is also under pressure, notably from the Russians who tell him: ‘There will be no return to the status quo. Once ISIS and Al Nosra are eliminated, you must forget about attacking the Kurds to reconquer their territory.’ The return of peace is in the Russian interest. So they ask the Syrians to examine the Kurdish project. ‘You don’t like it, we know, but you must examine it. We’re putting a bit of pressure on you, because you can’t have everything.’ In my opinion, it is in the Russian interest to support the Kurds as a counterweight to Damascus and Tehran, and if Russia does not support the Kurds, Iran will collect the prize.

In any event, in a few months when ISIS will have been eliminated, because that’s what’s going to happen, partly by the regime South of the Euphrates, and the rest by the FDS in the North and East of the Euphrates, there will be only two serious military forces on the ground: the FDS and the army of the Damascus regime. This will be the high point for the Kurds to negotiate because the military campaign will be over for them. They will not fire a single other shot. Damascus must be made to understand this simple logic: «Under pressure from the great powers, we negotiate and forget about returning to a previous situation. But, as a countermeasure, the regime will be saved because no one will attack it.”

Patrice Franceschi: “The alliance that has existed between Russia and Turkey for the past year and a half is unnatural, it’s momentary tactics. In supporting the Kurds, the Russians probably tell themselves: ‘Besides counterbalancing Tehran and Damascus, we maintain a threat over Ankara. In this way, we keep a sufficient grip on the Turks while garanteeing nothing will happen in the short term.’ This is why the Kurds are counting quite a bit on the Russians along with the North Americans and the French in the upcoming negotiations.

On the other hand, I don’t think the United States have a long term policy. As the French do, they tell themselves: ‘In three months, ISIS is finished territorially. Will we act as in Afghanistan and Irak? Will we leave when the military campaign is over?’ At the same time, they realize the existing stability in Rojava, the absence of civil war. This stability would be greatly threatened if there was not international support. The United States’ idea at the moment favors staying. Certainly not in the present military configuration but by shouldering the Kurds to stabilize the region, and keeping a hand in to weigh on future negotiations.”