Fehim Taştekin’s book “Rojava, the time of the Kurds”, banned 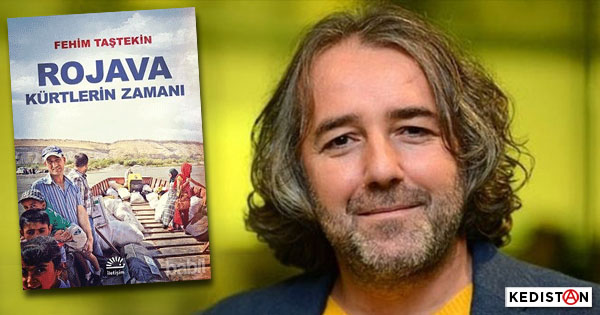 Following a judiciary decision banning his book “Rojava: Kürtlerin Zamanı” (Rojava: the time of the Kurds) Turkish investigative reporter Fehim Taştekin, whose reports on Syria have aroused interest in the general public, published a reaction on his Twitter account Wednesday.

Following the verdict rendered by the tribunal in the town of Kahta, province of Adıyaman in eastern Turkey, sale of Taştekin’s book was forbidden on the grounds it constitutes “terrorist propaganda”. In his tweet, Taştekin underlines the absurdity of the tribunal’s decision which accuses the book of having the “properties” of a terrorist organization.

Also underlining the fact the book was published in all legality and was not subjected to a judiciary investigation, Taştekin also criticized the fact his book was taken as proof of “terrorist propaganda” in indictments against other persons accused of “terrorism” and “crimes”.

Mithat Sancar, professor and parliamentary member for the People’s Democratic Party (HDP), questioned parliamentarians and the Turkish Prime Minister concerning three books that have been banned recently – that of Fehim Taştekin and two others, “Birakujî” (Feud between Brothers) by Faysal Dağlı, and “Kürt Tarihi” (Kurdish History) by Aytekin Gezici.

Referring to article 28 of the Turkish Constitution which states: “The press is free and cannot be censored”, Sancar put the following questions to the Prime Minister: “How can you qualify a book of being a terrorist organization? How many books are presently banned in Turkey? Which books are they? Is the ban on their sale and their distribution in conformity with the constitution and with international laws concerning human rights? What kind of precautions to you intend to put in place to forbid such bans?” 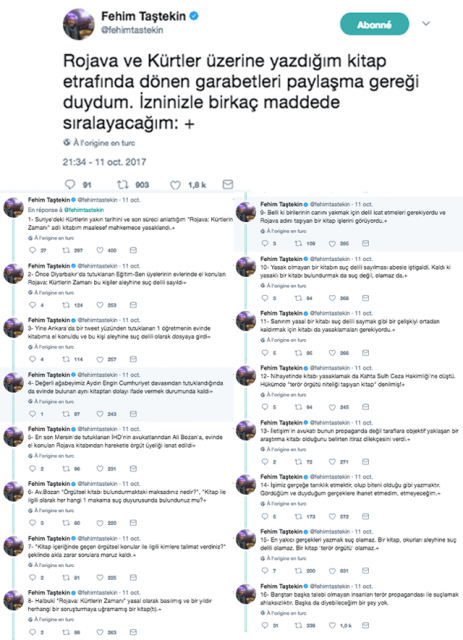 Translation of the Tweets:

I feel the need to clarify the horrors circulating around the book I wrote on Rojava and the Kurds. With your permission, I’ll express myself over several publications:

1- My book titled “Rojava: the time of the Kurds” in which I tell the recent history and most recent period of the Kurds in Syria has been unfortunately banned by the tribunal.

2- Prior to this, copies of “Rojava: the time of the Kurds” found in the homes of members of Eğitim-Sen [teachers’ union] and confiscated, were used as evidence against these persons.

3- In Ankara again, my book was confiscated from the home of a teacher who was arrested for a tweet, and included as evidence against him.

4- When our precious colleague Aydın Engin was arrested in the context of the Cumhuriyet trial, he was subjected to an interrogation where he was forced to admit having the book in his possession at home.

5- Recently, Ali Bozan, one of the lawyers for the IHD [Human Rights Association] arrested in Mersin, was accused of belonging to an organization [terrorist] based on the presence of the Rojava book confiscated from his home.

6 & 7- Me Bozan was subjected to insane questions such as: “To what purpose did you have this organizational book in your home?” , “Did you lodge any complaint whatsoever to the authorities concerning this book?”,”To whom did you communicate instructions on the organizational topics included in the book’s content?”

8- It so happens that, “Rojava: the time of the Kurds” is a book published in all legality which wasn’t subjected to any investigation in the past year.

9- It is obvious they needed proof to “burn” certain persons, and a book with the title “Rojava” suited their purpose.

10- The fact of using a book that isn’t banned as proof of a crime is null and void. Moreover, possession of a banned book is not illegal and cannot be so.

11- In order to delete the contradiction between “using” a legal book as “proof of a crime”, there was need to ban the book also.

12- Responsibility for banning the book fell on the Criminal Court in Kahta. The verdict stipulates “book demonstrating the properties of a terrorist organization”.

13- The lawyer appealed, specifying that the book is not propaganda but research done with an objective approach to the parties.

14-Our work consists of testifying and writing what is observed. I did not betray the realities I saw and heard, and I will not betray them.

15- The fact of writing about the most searing realities cannot be a crime. This book cannot be evidence used against its readers. This book canot be a “terrorist organization”.

16- Accusing of terrorist propaganda persons whose only demands are Peace is immoral. I have nothing else to say.