Hasankeyf, a unique heritage site, soon to be submerged 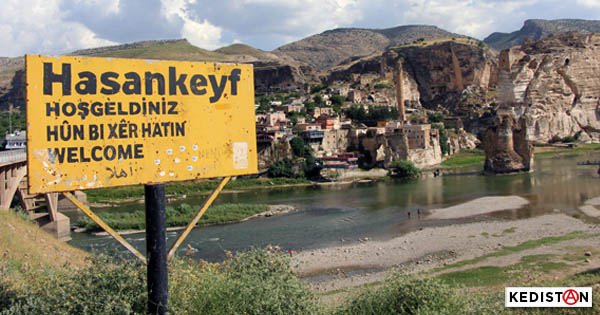 The building of a dam in Ilisu has been under consideration for over sixty years now, with the official goal stated as soil improvement and water resources for the Tigris valley. And for several years, work has been carried out on the quiet, with no information provided to the public.

It must be mentioned that reservoir impoundment will cause the destruction of several heritage and archeological artefacts in the small town of Hasankeyf, 80% of which will be covered by the waters. Not to mention the hundreds of thousands of acres drained in Irak, and the tens of thousands of persons who will be displaced…

If one gives credence to the legend related by a Kurdish prince of Bitlis at the end of the fifteenth century, the town of Hasankeyf was named in honor of an Arab prisoner by the name of Hasan. Sentenced to death, he would have asked the local lord as a final favor to allow him a few moments on a horse before his execution – using the opportunity for a daring escape, at which the astonished spectators cried out: “Hasan keif” (“how Hasan”). For their part, archeologists see a connection with the Arabic “Hisn Kayfà”, literaly “fortified rock ”. And with good reason. In medieval times, this town in southeastern Turkey indeed grew at the foot of a cliff on the shores of the Tigris. But Hasankeyf also benefited from the heights on which a fortress-citadel was built in the fourth century, as protection against the enemy.

The enemy’s face has changed however. For it is no longer war but a huge dam that threatens the town. At a cost of more than 1,2 billion euros, it is Turkey third largest hydroelectric project. It aims to provide 3,8 billion kilowatthours of electricity, some 3% of the national production, while irrigating 1,7 million acres of land. Ankara has made of it a major issue for the region’s development. The project is highly controversial nonetheless, both locally and abroad. And with good reason…

Once operational, the dam, built some sixty kilometers downstream from Hasankeyf, could cause the total disappearance of a true archeological treasure: besides the numerous historical monuments, the site is dotted with a quantity of troglodyte caves dug into the rock over ten thousand years ago and almost continually occupied since. Today, the oldest constructions date back to the twelfth century. They are the last witnesses of Hasankeyf’s golden age, of a time when it was an important staging point on the Silk Road. To cross the river, merchants congregating there made use one of the Middle Age’s greatest bridges – it is said to have spanned 200 m: there now remains two pillars and an arch. A great palace of which subsists a tower and many ruins was built north of the ancient citadel, giving regional authorities a vista from which to keep an eye on circulation below.

In those days, Hazankeyf was in the hands of the Artuqids, Turkmen warlords who were vassals of the great Seldjuk empire, after having been the property of eight different dynasties: at first an Assyrian stronghold, Hasankeyf fell under the domination of Alexander the Great, then of the Parthians, the Sassanids, the Romans, the Byzantines and of two caliphates (the Umeyyad and the Abbasid), before becoming the Artuqids’ bastion. It was then transferred to the Ayyubids, an important dynasty of Kurdish origin whose power extended from the western part of the Middle-East all the way to Egypt.

Hasankeyf then resisted attacks from the Mongolian empire and several buildings were erected. Ruins of a small palace still stand on the edge of the cliff: above one of its windows, one can still distinguish a low relief depicting two lions and texts in Kufic. Lower down, near the river, the El-Rizk mosque raises its imposing minaret some 30 meters toward the sky. Close by in the heart of Hasankeyf, the Süleyman mosque has a minaret divided into four storeys, decorated with plant ornamentation and Kufic script. To the east, the Koç mosque is said to have been part of a complex including a school, a canteen, a dispensary and a library. To these remains one must add those of the Ak Koyunlu Turkmen dynasty that briefly occupied the town in the fifteenth centry: with its lovely turquoise enameled earthenware and inscriptions, the magnificent Zeynel Bey mausoleum leaves no one indifferent.

The town then fell under the control of the Ottoman empire. All told, it holds 300 monuments ranging from the twelfth to the fifteenth century and over 4000 troglodyte dwellings. “A priceless cultural heritage », says Ercan Ayboğa, a former hydrologist who is now the spokesman for the collective « Initiative to save Hasankeyf », created in 2006.

The site which extends over a large area has only been studied for the past forty years, and the war against the Kurds hampered excavations in the nineties. The digs have only received paltry funding since then, mostly allotted to the medieval monuments : there would still be much to discover. In the meantime, work on the Ilisu damn started in 2006 and was interrupted on numerous occasions due to the conflicts in the region. The building program continues nonetheless: if the hydroelectric station has not been completed yet, the structure of the dam would now be done. Hasakeyf’s 7000 inhabitants are thus condemned to witness the disappearance of the major part of their town in the catch basin. What has been planned to salvage the remains?

“Almost nothing », answers Ercan Ayboğa. The Turkish government announced a protection program. But the troglodyte dwellings are not included in it. Officially, only thirten medieval monuments would be protected. They are to be moved, piece by piece, to a future archeological park. According to Zeynep Ahunbay, professor of architectural history at Istanbul’s Technical University, this cannot be done without deterioration: the decorative wall coatings will be lost, for instance. Moreover, the Turkish authorities will not necessarily keep their word. Since 2009, large foreign investors (Switzerland, Germany, Austria) have pulled out of the project, Turkey not having respected some of the required criteria concerning the environment, cultural artefacts and population transfers.

Thus far, although the Turkish law for the protection of cultural and natural goods states that « irremovable cultural artefacts must be protected », a single monument has been saved: the mausoleum built for Zeynel Bey, son of Uzun Hasan, the founder of the Ak Koyunlu dynasty. After two years of preparatory work, a Dutch contractor carried out the operation, using a special platform set on over 150 wheels. A meter-deep concrete pedestal was poured under the monument prior to its transfer onto the platform by hydraulic cranes. On May 12 last, the monument was transferred to a location some two kilometers further, out of reach of the waters, thanks to a system of rails and a special road coating.

“Europe was against the dam, but we will move eight more ancient buildings » proudly announced Veysel Eroğlu, the Turkish minister of Waters and Forests. He added: « It will constitute an example for the world. » An example? Oh no! Besides the troglodyte dwellings that will be lost forever – entire portions of the cliff were destroyed mid-August – some 670 000 acres of marshland will be drained in the ancient land of Sümer (the southern part of ancient Mesopotamia, the present-day Irak). And if, for lack of support from the Turkish government, Hasankeyf was not added to the Unesco’s list of World Heritage sites despite being one of the only sites in the world meeting nine of the ten required criteria (a single one is usually sufficient!) the Iraki marshlands are listed since the summer of 2016. And finally, when the major part of Hasankeyf and some ten villages will be submerged in Turkey, tens of thousands will be deprived of water in Irak…

The Turkish authorities couldn’t care less. Especially since, after the withdrawal of foreign countries and contractors, some multinationals remained as partners and Turkish banks have pitched in with loans to the consortium building the dam. Worse yet, the State claims it is providing work to the inhabitants (and some are indeed working on the dam) and relocating them: in fact, it buys back their homes at low rates (500 Turkish lira per square meter) and sells them other homes at twice the price on the heights in the new town, offering them – such royal treatment! – the possibility of an interest-free loan…It is therefore unlikely that campaigns in support of Hasankeyf or of the Iraki marshlands will make the government back down. Besides, as some have pointed out, if the government is so attached to the dam project, it is certainly not devoid of political afterthoughts.

In destroying Hasankeyf, the Turkish State deprives the Kurdish inhabitants of their resources, the rich heritage of the area holding the possibility of an open air museum. What’s more, the building of dams in southeastern Turkey complicates the pursuit of military operations by the Kurds. Carrying out actions in support for Hasankeyf is difficult. The arrest of French journalist Mathias Depardon last May is proof enough: more than ever these days, it bodes ills to display curiosity over what is going on in that part of Turkey.