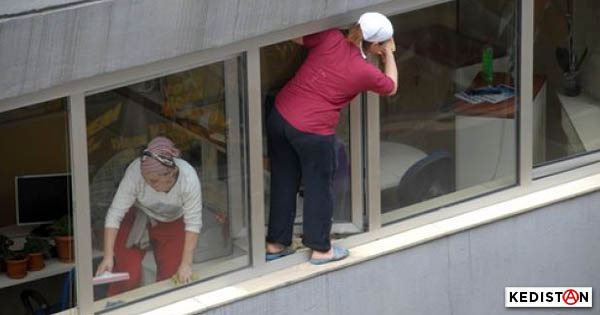 In an article published by Sol Gazetesi, Ayçin Özoktay documents the exploitation of daily domestic service employees, now an integral part of the service industry which functions like other industrial sectors on a capitalist mechanism that rests on the exploitation of a work force « with no security » , « flexible » and « indexed on the basis of performance ».

In this Kedistan article you will find Ayçin’s report, excerpts of an interview she conducted with Feyza, a cleaning woman, and our reflections.

Ayçin Özoktay groups the work methods into three large families :
• Individual work : women who work on an individual basis and who usually find their employers through acquaintances. They work as « dailies ». The work is at the survival level for persons jeopardized by capitalism and who exert daily efforts in finding alternative revenue sources.
• Cleaning firms : With the generalized arrival of these firms as go-betweens for employers and individual cleaning women, these last become proletarians. For the firms collect commissions on their daily wages and the cleaning women thus become workers supplying a profit for the capital invested by these firms.
• “Virtual firms » : These are the most recent entries on the market, they have developed rapidly, « organizing » services via social media networks.

The work conditions in themselves are not very different in these three major groups. We’ll look more closely at the « virtual firms » because Feyza works at “Armut Temizlik”, or rather « via » this firm which operates on social networks.

This firm offers its “services” in Ankara, Istanbul and Izmir. Feyza specifies that she applied to this firm when she found herself unemployed and had to pay her rent. She explains she was hired following a videoconference interview on WhatsApp. She has no insurance against work-related accidents and she is not hired with a contract stipulating who is the owner of the home she must care for, and who « may acquire an accident insurance, if they so wish ». Payment is on an hourly basis, 15 Turkish lira per hour for the first hire, the equivalent of 3,69€ at the current rate of exchange. And no doubt, « the first time » she is considered « on trial » by the firm. Starting with the second job, payment goes up 17 Turkish lira (4,18€).

Feyza : Housecleaning is not simple. You need finesse for the windows, for example. Some customers follow you step by step with a rag in their hand and angrily clean up behind you, saying « you’re not cleaning well ». You feel pressured constantly. If you get low points on your first jobs, they don’t hire you anymore. Afterwards, there’s a quota, you must obtain three out of five points. If you fall under three, they no longer hire you. Each cleaning job becomes a source of stress. In each house you have to say « please, could you give me a good score, or else I won’t be hired again and I need to work. »

The performance-based system, the threat of unemployment

The system in which Feyza finds herself is thus a « performance-based » one. Performance is a system that rests on reward and punishment in order to increase production. Judging and classifying the worker on social medias through this point system forces the workers to remain silent even when faced with difficulties, abuse and injustice.

Unemployment, one of capitalism’s most fearsome weapons, with the added competition thrown into the game, traps the workers in the cleaning sector into the performance system.

Who’s the boss, nobody knows

Another problem attracts immediate attention, that of the fuzziness surrounding the representative. The fact workers enter a « production » process through hiring via social networks deprives them of all contact with their colleagues (their competitors, in fact) and they cannot know who are really their « bosses ».

Feyza : “When you start to work, you contact the person who calls you for the job. But you don’t know who you’re talking to. It’s either an SMS with a number or a voice, at best. You don’t know where he/she lives, you don’t know who he/she is, what kind of person he/she is. It may be someone you come across constantly but you don’t know, it’s a mystery… The calling numbers or the ones you call belong to the firm, you have nothing but the sms or the voices. You don’t even know the other people who work with Armut Temizlik in your town. In one word, the system is « Perfect » !

As Feyza says, in this type of arrangement designed to avoid contact between bosses and employees, contact with other employees is also carefully avoided. Employees cannot exchange information, strengthen each other, organize, act together. Their professional life is stuck in individual work and the score they receive for it. Consequently, this well-oiled exploitation mechanism operates without a single grain of sand blocking the wheel. No meetings, no protests, forced silence and acceptance.

A plain bandage for a wound and 9 stitches !

Twenty days ago, Feyza had a work-related accident. The wound on her leg required nine stitches. Accordingly, she lost twenty days of work.
Feyza : “In any event, if you’re a « daily » the Labor Law considers you’re non-existent. You have no insurance and your client doesn’t insure you against « work related accidents ». So besides the fear of unemployment, you have the fear of an accident, of being handicapped or even of dying… When the owner (the client) saw my leg, she said « I’ll give you a bandage and you go on working ». What she considered a bandage was good enough for required nine stitches ! I called the person who had given me the job at Armut Temizlik but I never managed to reach him. Five hours went by…You don’t even know if this person is in the same town as you are in any case. When I finally received a return call, all I got were wishes for a speedy recovery and words spoken for form’s sake : « If you need anything, let us know »…There were x-rays, stitches but after that sentence received over the phone at the hospital, no one asked about me. The client’s husband called me once to wish me a speedy recovery. And that was it. »

As long as capitalism will exist, this exploitation will continue and find other modalities

Feyza’s testimony is but one example among millions of others of the situations experienced by workers, no matter the sector in which they work…

Women and men who sell their work force in order to survive and live will continue to be exploited. For capitalism, nothing matters other than profit. Neither security at work, nor the right to health, nor poverty and misery, nor the lives of millions of human beings.

Yes, all this is happening in Erdoğan’s Turkey… The “orientalist” vision still holding sway in Europe masks the fact that, behind the neo-Ottoman facade of the AKP regime, what is truly in power is neo-liberal capitalism. In the reigning oligarchy as well as in the wealthy social classes who give themselves Kemalist airs with a touch of opposition, class struggle is not absent from the shores of the Bosphorus or of Anatolia.

There also, the new modes of exploitation are spreading with the virtual and with the individualization of workers, transformed into competing « self-exploiters ».