Emani al-Rahmun, your story still needs to be written… 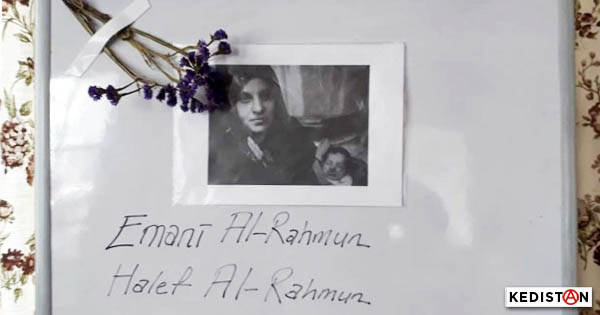 On July 6th, the media trumpeted a murder committed by two men. Emani al-Rahmun, a Syrian refugee living with her husband Halid and ten-month old baby Halaf in Kaynarca, Sakarya district, was raped and killed with her baby. The young woman was also nine months pregnant.

The authors of the crime were arrested. They are Birol Karacal and Cemal Bay, employed in the same poultry processing plant as the husband Halid al-Rahmun. The two men admitted their crime.

Following an argument with Halid al-Rahmun on the night shift, Birol Karacal et Cemal Bay, took unauthorized leave of their work and headed to al-Rahmun’s home. They used a crowbar to break op »n the door, made their way into the apartment where they knocked out Emani and strangled her ten-month old baby Halaf because he was crying. They bundled up Emani and the baby’s corpse in a blanket and drove them out to a wooded zone. After raping the young woman, they killed her by smashing her head in with a stone. They fled, abandoning the bodies.

On coming home at 07h00 to accompany his wife to her medical appointment, Halid al-Rahmun found the premises broken into and his wife and child missing. He went to the police and declared he had been threatened by Birol Karacal and Cemal Bay following an argument. Birol Karacal, a married man and the father of one child and Cemal Bay a bachelor, were taken into custody and confessed to the crimes. Cemal Bay had a previous conviction for sexual assault on a mentally handicapped woman. The murderers accused one another for the kidnapping and the murder, and confessed they had wanted to bury the bodies but the earth had been too hard, and also that they intended to kill Halid al-Rahmun. With day breaking, they had « delayed » their plan. Emani and Halaf’s bodies were found in the wooded area, hidden under branches and twigs.

So much for a sordid tale with all the makings of the sensational kind of news Turkish summer editions of media at the government’s beck and call latched onto greedily. Even the opposition and alternative press relayed the information as an isolated case. So why would Kedistan follow in their steps in describing this horror ? The answer is in another article ; shifting attention from the sordid to the functioning of a press at the service of the AKP regime, it throws another light on mental manipulations, including those practiced in the reporting of a crime.

This is why we publish here a translation of Esra Arsan’s article, published by Evrensel on July 14th 2017.

Emani ‘s name appeared in the media as that of « the Syrian woman ». News reports headlined : « The Pregnant Syrian Woman Was Murdered », or spoke of her as « The pregnant Syrian woman and her 10 month-old baby in Kaynarca, Sakarya”.

Her name is Emani al-Rahmun. She was 20 years old. A Syrian refugee. One of those women war victims who fled the civil war in their country. Exiled, she took refuge in Turkey. Her husband worked in a poultry processing plant.

The fact Emani al-Rahmun and her ten-month old baby were savagely massacred by two neighbors made the headlines and was reported as an atrocious and isolated act. Yes, the case is atrocious but it is anything but isolated. Emani al-Rahmun’s story is also that of many other women refugees in Turkey. And this story isn’t over yet, it carries on with all its atrocity and violence. Let’s take a look in the mirror. The persecution to which were subjected Emani and her family should not consist of a breaking-news flash for a few days only to be forgotten. Emani al-Rahmun ‘s real story has not been written.

Out of suffering, we have created a business

According to published figures, approximately one million Syrian refugees are in Turkey. 75% of them are women and children. Most of the refugees are in towns such as Kilis, Gaziantep, Hatay, Adana, Mersin, İstanbul. For years now, information has come out of those towns, one after the other, concerning the violence, abuse and aggressions targeting these women and children. They are subjected to physical, psychological, social, economic and sexual violence. Child marriages, little girls «leased out » to the landlord to pay the rent, women transformed into sex workers through short-term marriages, child laborers exploited with the use of physical force, Syrian women bought and sold as second or third wife…All these are stories of Emani al-Rahmun.

In 2014 (journalist) Amberin Zaman published an article. In Nizip, a 22 year old woman, mother of 3 children and working as a cleaning lady was sold by her colleague to a man who presented himself as a member of the security forces. After confiscating the woman’s identity papers, he raped her and threatened to « commercialize » her to other men. This case is mentionned in reports of international organizations. A woman in Reyhanlı testifies : “My Syrian neighbor married off his 14 year old daughter to a 40 year old Turkish man. The man kept the girl with him for two months, then he gave her back to the family. » Marriages of Syrian children to older Turkish men are arranged through organized networks of go-betweens. These go-betweens commercialize to Turkish men children under 18 years as well as Syrian woman who have reached their majority. These are marriages that last a month, at most…Sales of women as second or third wife. All these realities reveal the context for Emani el-Rahmun’s atrocious massacre.

Let us recall the words of Raja Altalli, a Syrian activist working Gaziantep : “We know the prostitution exists. We recently heard of a mentally handicapped Syrian refugee who was commercialized in Kilis. But as these are sensitive topics, no one wants to talk. »

Lawyer Seçil Erpolat, a member of Batman’s Bar Association Commission on women’s rights explains how, in Batman, young Syrian girls are married off in religious ceremonies arranged by brokers. She shows how all this has become a business and how the refugees are abused in this fashion : “In one of the cases of which we are aware, a Syrian refugee was chosen out of a catalog of women’s photos provided at a gas station in Nusaybin, and married off as second wife, for 1000 or 2000 Turkish lira [some 250 or 500€]. The woman had fled from the house of the man to whom she was married off, and also from the violence to which she had been subjected by her first husband. She took refuge at someone else’s home. Official organizations transferred her to Hatay, then to a shelter in Ankara. In another instance, a 16 year old Syrian girl was purchased by a 60 year old man, already married, for 10 000 Turkish lira [ 2500€]. Brought to the GAP neighborhood, the child refused to enter the old man’s house and managed to escape. People in the neighborhood called the police who took the child into custody. »

Information, not on a day-by-day basis, but in the long-term

No, Emani al-Rahmun’s story has not been written. For this story isn’t over yet. The file has not been closed with the transfer of Emani and her babies’ remains to Syria. This file is still open, with all its violence and its gravity.

Waiting for another case of rape and atrocious violence to produce information is not journalism. The mistreatment Syrian refugees suffer in Turkey constitutes a big information and research file that deserves days and days of writing. The persecutions, violences, agressions and rapes of Syrian refugees in our country, do not constitute « a sadly human drama » for, in each case, their perpetrators are known. So are the organizations attempting to protect the refugees. The crime is happening in full daylight. But no one is condemned. This state of impunity facilitates and increases the castastrophies that befall the Emani al-Rahmuns.

Emani al-Rahmun’s murder is not a crime that should be attributed solely to two persons. It is part of a much more organized and structural crime. Those who commit this crime, those who clear the way for them, those who legitimize the crime, those who profit from it, those who shut their eyes and ears and pretend they see nothing, those who accuse the victim, all of them, participate in this crime. And therein lies a big problem. There is information to bring to light, and it requires research. We do not want journalists to write articles, isolating this « sadly daily » case, as if they constituted surprises out of which to produce teary information. We expect them to produce responsible journalism, journalistm that protects the rights of those refugees who are in our country to flee the war. Instead of information transforming the atrocious cases of Syrian refugees into sensational flashes, we expect information on the problems they experience in our country, we would like to see information that delves deeply into the legal, economic, police and political dimensions behind this spiral of violence.

Hencerforth, this is difficult in Turkey, but across the world, there exists numerous university researchers working on the topic of Syrian refugees. In Turkey and in other countries, there exist several NGOs that put together reports on the living conditions of refugees and victims of forced exile. There exist reports, records, documents, women’s rights organizations, Bar associations and compilations of testimonies by refugees. Any journalist who so wishes can easily access these document and reports, and can reveal Emani el-Rahmun’s unknown story.

We are looking for real journalists who will write the real story of what Syrian refugees, women and children are subjected to in Turkey.

No doubt it is futile to ask medias under governmental orders to do this work when they are nothing but the second skin of the AKP regime. We might even add that, in what still subsists under constance surveillance,of medias « under probation», the topic of « Syrian refugees » surfed on a xenophobic wave for a while, when the Reis announced a year ago he wanted to extend Turkish citizenship to some of them. We reacted to that wave, coming from the nationalists, and that found echos among the Republican Kemalists…

Xenophobic and racist appeals circulate constantly on social media platforms. Some lead to exactions in the poor districts where refugees are concentrated, and could degenerate into pogroms. On a background of exacerbated nationalism, fake news, rumors spead and retransmitted create a context favorable to scapegoating in the growing financial crisis. This context, that Esra Arsan only hints at, since her topic is more that of the exploitation of human beings, women and children in particular, increases fears « real journalists » may have about researching and writing about the long-term.

When accompanied by an identitarian form of populism, nationalistic racism and xenophobia are one of the instruments to preserve political power. The Reis know how to play with it, blowing hot and cold. When racists objectify others, in a strongly patriarcal society to boot, they allow the commercialization of women’s bodies, reducing them to « object of abuse » with no consideration given to morality or religion, as has always been the case for slavery and the transformation of humans into nothing but a work force.

Once the other is « racially profiled» and the origin of his exile negated, cheap labor and sexual exploitation can proceed unabated in this Turkey considered as a « safe haven» according to the current European agreements on migrants.