Cumhuriyet, your republic is a dictatorship 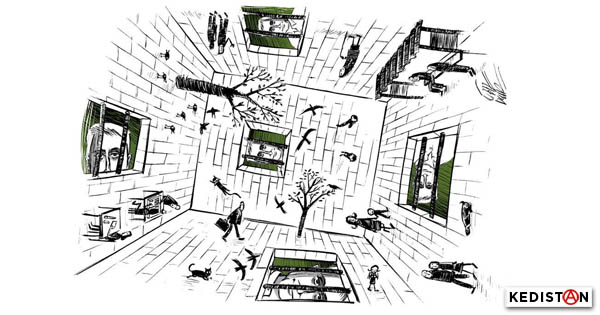 Cumhuriyet is part of the pile of read newspapers that long throned on the couch. So, suddenly, I put a question to myself since my « news » delivery man has changed.

Has he been arrested ?

Because, reading the defence of the accused at the current trial, a real question crops up :

The delivery man having touched the newspaper every day for so long, and this paper being written and directed by journalists who had their floors maintained by a craftsman whose brother-in-law knew someone who knew someone who had spoken about Gülen during a meal at the restaurant, I’m worried for this boy, and for myself by ricochet. I hope they don’t make him talk…

The prosecutors have written up such indictments that it’s now enough to shop in the same boutique as the neighbor to the cousin of a suspect to be held in custody, and the shop owner too.

Musa Kart, to pick one at random, the caricaturist at Cumhuriyet, offered up his defence with these words : « Rather than staying quietly in Bodrum in a room with a view on the sea while hoping for three days of sunshine, I’ve spent the past 9 months in a cell with view on the concrete in Silivri. I’m experiencing a reservation mix-up and I couldn’t let it pass without mention. »

How else to respond to an injustice prosecutor who can seriously charge journalists with defending in their columns three different organizations at once, all considered as criminal and terrorist, and all fighting one another to the death ?

At that rate, they may as well be prosecuted for multiple adulteries, there will certainly be an article in sharia law that will fit the charge.

Musa Kart is facing a sentence of 29 years of imprisonment. He is, supposedly, the member of an organization to which he drew attention, through political caricatures showing the inordinate amount of space this organization then occupied as Erdogan’s right arm in ruling the State. Since then, the Erdoğan-Gülen divorce has been pronounced. This changes nothing to the accuracy of the caricatures. In 23 years, Musa has drawn a lot of caricatures against Gülen… I suppose the prosecutor will say « spare the rod, spoil the child. »

But put your mind at ease, all of the accused denounce the hypocrisy, the incoherence, the absence of justice and they do it in all seriousness too. Not because the journalists at Cumhuriyet believe even for an instant that they will convince the judges, but because, from what I’ve seen, their European journalistic colleagues are finally budging and publishing their comments. It was about time that the story move out of internet websites for the initiates and out of the limited circles of journalists aware of the vastness of the purges…For how long have I been kvetching now and saying that soon, we won’t find anything to read that doesn’t smell of the Reis’ aftershave ?

When, in the same days, we hear and see written that our « authorities » now designate Amnesty as the latest terrorist organization that met to organize a secret putsch, one year after the failed one that fell out of the sky to help Erdoğan, we start to hallucinate.

The worst part is that, if the Reis calls for the reinstatement of the death penalty against those defending rights, and human rights in particular, there will be some to find this smart.

But there are no pills against the murderous folly of a regime that circles on its chief without knowing how to stop. A spinning top fascinates.

If it didn’t hurt me to do so, I would have each and every one of the appeals filed by the accused and their defenders and resonating in the court rooms translated. But I’ve even stopped looking them up on the web. Cumhuriyet will also forgive me for not coming out to support them. I’m saving my energy for my former newspaper delivery man.

Turkey is a jail visited by tourists in search of sun and exotism. And we go on smiling at them, as if nothing was going on. Perhaps people visited Warsaw in the same way during the 40’s ? It was a beautiful town because it was destroyed.

By the way, you should move European headquarters to Munich… Just a thought in passing.