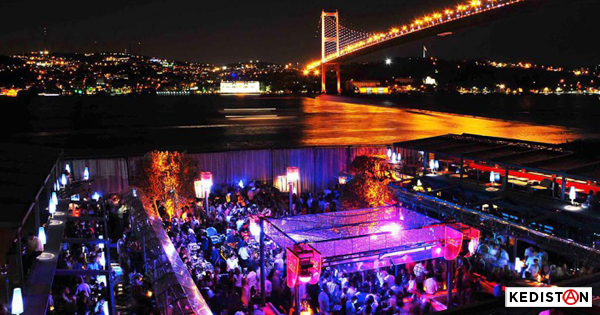 Reina is one of the most famous nightclubs in Istanbul. It was attacked on this, the beginning of the 2017 New Year.

According to the Prefect Vasip Sahin, the attack was carried out by a single person who first shot down a policeman at the door, then a civilian, before entering the club. At least 39 people were killed and 60, wounded. According to the BBC, 16 of the victims were foreigners. 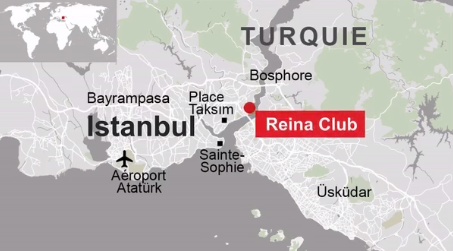 Yet witnesses mentioned several armed persons. One of the wounded transferred to the Sisli Etfal hospital:   “Three or four persons fired with submachine guns at first. Afterwards, inside, they shot the survivors in the head.”

One of the waiters at Reina said there was a movement of panic and he managed to hide. “Apparently, there were two of them, I saw one.” Some 500 to 600 people were in the club.

Some customers are said to have jumped into the Bosphorus to save themselves. Some witnesses said the assailants arrived, “disguised as Santa Claus”.

We will spare you the videos circulating on social media.

The owner of Reina, Mehmet Koçarslan, declared: “They are said to have used kalashnikovs. American security services had signaled the risk. For one week to ten days, there were security measures, including on the sea front. What happened afterwards?”

Following the attack, the police cordoned off the club…

Censorship surrounds information on the topic…

Over the past few days, an “anti New-Year” mobilization had been observed in different Istanbul neighborhoods. Members of Islamist organizations had distributed flyers inviting the population not to celebrate the New Year, and members of the “Anadolu Gençlik Derneği” organization (Association of Anatolian Youth) during a gathering at Istanbul University, had publicly “circumcized” an inflatable Santa Claus, before knifing him. 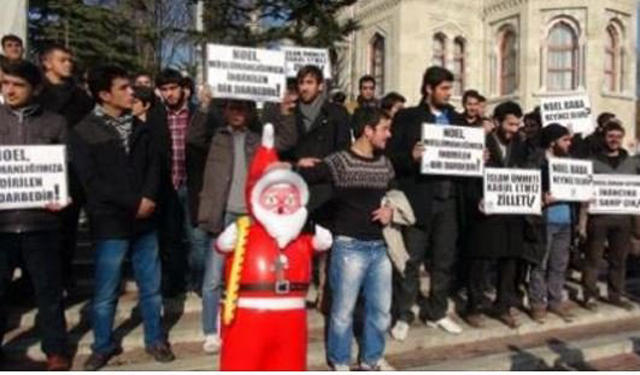 Last Thursday in Aydın, a town in Western Turkey, members of the group   “Alperen Ocakları” ( Alperen Homes) in traditonal regional costumes had stage an “execution” of Santa Claus.

This type of mobilization has been a recurring event in Turkey for the past few years. Is there a link with the attack on Reina? The question can arise.

Identitarian withdrawals have their own symbols. The symbols differ, but the violence is the same. If Santa Clause gets knifed in Turkey, in France the “Republic” has been stoned by youths of the Front National in front of the gates of the Préfecture… 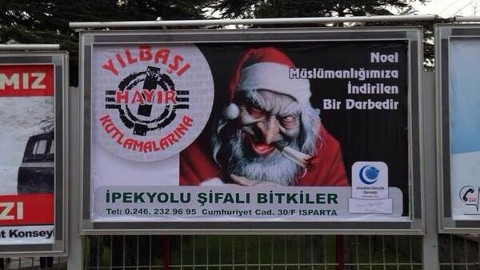 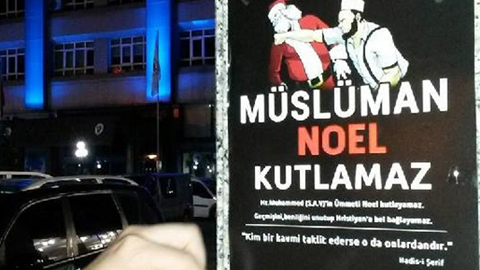 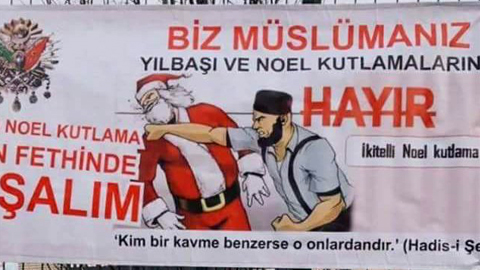 It would be hard not to draw connections with this climate, added to the polarization wished by Erdogan denouncing certain “elites” and the assassination of 39 persons during the night in a spot known for the parties of a certain Istanbul bourgeoisie.

By many aspects, the limits of identitarian populism and/or Islamist bigotry resemble the ISIS ideology.

At this hour, information is totally absent and the regime uses the term “terrorism” in a generic way. We now know that, for the regime, it can designate an opposition journalist, a critical lawyer or a humanist author and be coupled with “National Unity” even more than with “fight against obscurantism”. The Prime Minister’s words, translate, literally as those of “double standard terrorism“…

If the European media pick out the list of 2016 attacks adding the words “Kurdish radicals” to them, we must note that on the same topic, the Turkish ministers maintain the habitual conflation of the PKK with ISIS.

This morning, Erdogan announced that he would go after “the sources” which, in the mind of a Turkish nationalist means the Kurds of Syria as well as those of Bakur. We can therefore fear that additonal purges will take place as as response, as will the pursuit of bombing in Syrian territory.

The complicit media, such as Yeni Şafak, are already announcing “anti-PKK” operations, like in Batman. As a reminder this same rag was publishing this type of image on December 28: Santa Claus here also symbolizing “the West” attacking Turkey. 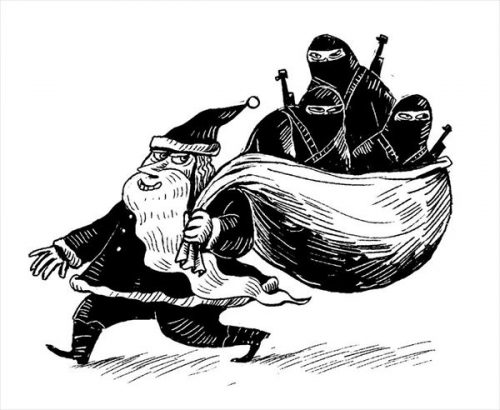 If the failed putsch in July would represent ” a gift from heaven”, this massacre could well be a “gift from Santa Claus”, but always serving the interests of the AKP regime.

ISIS has claimed authorship for the attack. BFM TV won’t be happy about that, after claiming yesterday that the attack was the work of the YPG “a dissident branch of the PKK” (with total self-assurance and no subsequent correction of this total stupidity out of the mouth of their “correspondent”)

ISIS claims this attack on the Istanbul Reina nightclub in these terms:
“The apostate Turkish government shedding Muslim blood must know that fire will burn in its house.”