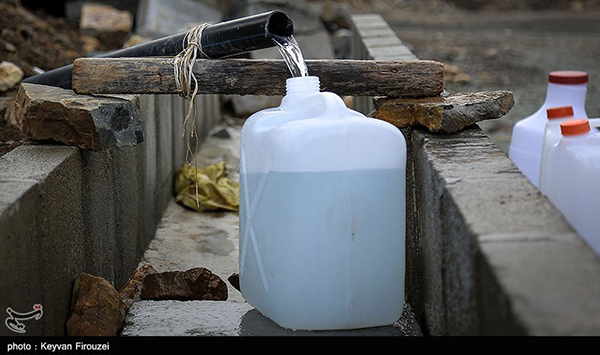 In a small Kurdish village near the town of Sanandaj in Iran, some dozens of people stand in line waiting to fill cans with pure spring water.

In late October, the video was shared widely on social media in Rojhelat1The term used by Kurds to describe the part of Kurdistan located within Iranian borders. It encompasses a larger territory than the official Iranian province called Kurdistan.Access to drinking water is a recurring problem. One Telegram chain devoted to this topic was launched on October 24: it had almost 20 000 subscribers by early November. Although repeating that these were not political demands – in order to protect themselves from repression by the authorities – its subscribers appeared angry enough to suggest the imminence of an important protest movement. Besides water shortages due to the depletion of sources of groundwater, the quality of the available water makes it unsuitable for drinking, particularly because of an important pollution by arsenic. Protests have erupted, notably at the local level in regional villages. Essentially, inhabitants are protesting about the bad taste of the water, holding the public authorities responsible for the pollution.

Tap water in Sanandaj : Water flowing from the tap has a yellowish tinge

According to Ali2The name was modified., a local journalist, the water shortage is due to a shortfall in the rains and an over-exploitation of the resources for agriculture, depleting the reserves. The water is notably used for growing wheat, something the government has turned into a political issue, as explained by an activist from the Çiya association. Ciwan3The name was modified. says: “When the regime took power in Iran, it set up agricultural divisions in the different regions. For example, citrus fruit in Northern Iran, wheat and grains for the center and for Kurdistan. (…) As an encouragement, the government gives certain aids to those who grow what is asked of them. But these aids are not based on agricultural research and they are not environmentally sound, resting only on demand. For example, Kahmenei said we wanted to be self-sufficient for wheat. Therefore, a large amount of underground water was pumped for this reason, only so Iran could claim it was self-sufficient in wheat production. This is not environmentally warranted. There are 600 plains in Iran, of which 270 are entirely dried out and unfit for agriculture. This is the result of an excessive reliance on underground water. (…) No more than 20% of underground water should be used, in the most extreme cases. (…) Iran has already used up close to 80% of its water reserves. Iran is experiencing an agricultural crisis and the plains are being transformed into deserts. The water issue will turn into a crucial problem for Iran’s future.” 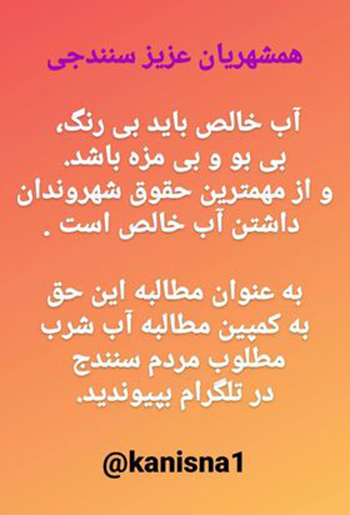 Widely shared on social media this text reads: “To our dear compatriots in Sanandaj, pure water should be colorless, odorless and tasteless. This is a basic citizens’ right. In order to demand this right, join Telegram in our campaign”

Arsenic pollution could be the result of gold mining activities according to Azad. Scientific studies claim that this pollution originates in the earth’s crust. It is hard to learn anything more about it: authorities refuse to conduct any serious studies, while pursuing dangerous mismanagement of the resources according to the inhabitants. Far from the inhabitants’ concerns, a study done in 2014 by Iranian researchers concluded that water pollution by heavy metals was inferior to international standards, and that the contamination of vegetables by chromium and lead should be attributed to the circulation of cars and trucks on roads near agricultural operations…

Yet another study, in 2020, confirmed heavy pollution by arsenic attributed to processes in magma differentiation as the earth’s crust was in formation.

Faced with the facts, the municipal and provincial authorities representing the regime have made short-term promises. Thus, this year, they have promised to transfer water to the town from the Azad dam, some 40 kilometers West of Sanandaj, and to reinforce the fight against illegal drilling of wells, contingent on receiving necessary budgets and authorizations from the government. “What matters in this part of Iran,” adds Ali, “is serious management. If it is implemented, there will be sufficient water reserves.” This poor management, combined with recurring spells of draught have led to an increase in the crisis since 2017. Moreover, those denouncing the neglect by authorities risk heavy consequences.

Thus, although the environment is one of the only areas in which public action is possible without incurring immediate arrest, environmental activities are severely repressed, with dozens of arrests in the past few years. Khabat Mafkheri provides one example. Arrested on August 11 in Sanandaj, he was liberated after paying a heavy fine, then re-arrested on September 26. He is still in prison, forbidden all contact with his family, and still ignorant of the charges against him. Ciwan testifies: “The government is not in the least bit kindly disposed towards us. Currently, some of my friends are in prison. The government is constantly putting obstacles to our activities. It does not consider the environment as a priority when it plans a project. The plans concerning dams are purely political with no environmental considerations, they are not in the people’s interests. (…) Here’s another statistic: Kurdistan province occupies the 6th or the 7th rank in agricultural lands but the second in terms of water resources. In terms of these statistics, Kurdistan should be the 3rd or the 4th agricultural producer in Iran, but it stands in the 19th position. Agriculture in Kurdistan is not well organized at all. Moreover, the waters in Kurdistan flow to neighboring provinces. Kurdistan is heavily disadvantaged relative to other provinces, it does not even have a single industry or factory with 1 000 workers. This has led to Kurds emigrating to other regions in the country in order to work as laborers or even as engineers in industry. Because in their own province, they cannot find work.”

The denunciations of poor management are part of a wider protest against the policy the central Iranian regime practices regarding the 8 million inhabitants in Kurdish regions. Ever since Kurdish organizations participated in attempts at autonomy for the region during the Iranian revolution in 1979, the regime has exerted a ferocious repression against all political protests and identitarian demands. Kurdish regions, on the margins of the central Persian regions, are voluntarily maintained in economic precariousness and its resources, including water, are exploited to profit the central government. There are no industries, unemployment is endemic, forcing inhabitants either to exile in large Persian towns in search of word, or to become kolbars, meaning carrying merchandise on their backs across the mountains between Irak and Iran, at great risk.

Water could very well be an excuse to kindle Iranian Kurds’ anger again, as they had mobilized massively during the 2019 demonstrations, at the cost of heavy repression.