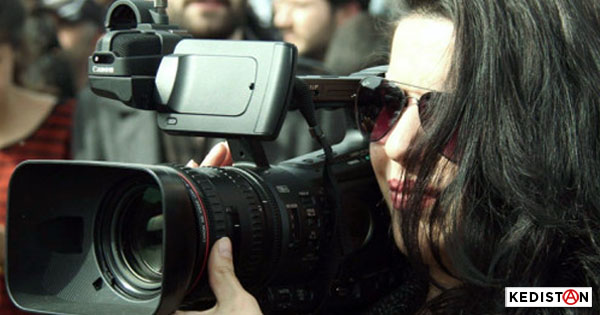 Frei Denken, the Swiss Association of Free Thinkers,  awarded its “Freethinker Prize” for 2017 to  journalist and artist Zehra Doğan, jailed in Turkey, and to Masih Alinejad, the Iranian journalist who founded the social media My Stealthy Freedom which allows Iranian women to post their photos without hijab on a Facebook page and on a blog. 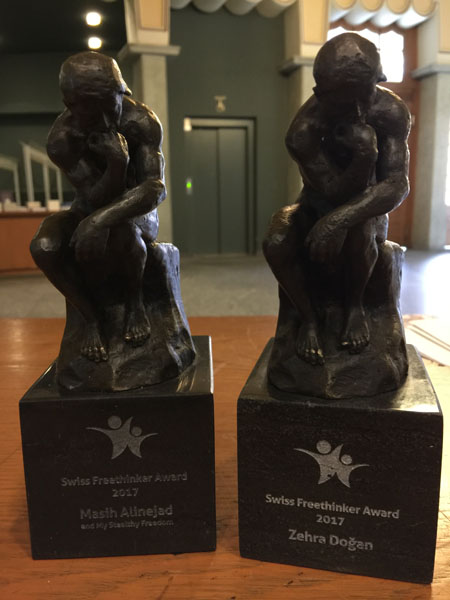 In 2015, the Freethinker Prize was awarded to author and blogger Raif Badawi, sentenced to 10 years in prison and  1 000 whiplashes in Saudi Arabia, as well as to his wife Ensaf Haidar  and to their lawyer and Human Rights advocate, Waleed Abulkhair.

Zehra Doğan, incarcerated since June 2017 in Diyarbakır prison was represented by members of Kedistan, the webzine organizing and upholding the European solidarity campaign which includes the exhibition of her works and a book produced as an accompaniment. Excerpts of Zehra’s letters were read in Turkish and in English at the ceremony. The hundreds of guests, free thinkers including scholars, scientists and journalists saluted Zehra’s testimony with enthusiasm and warm applause. 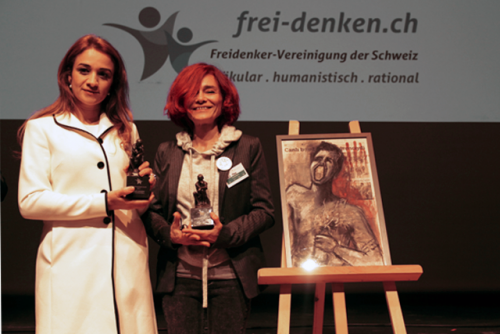 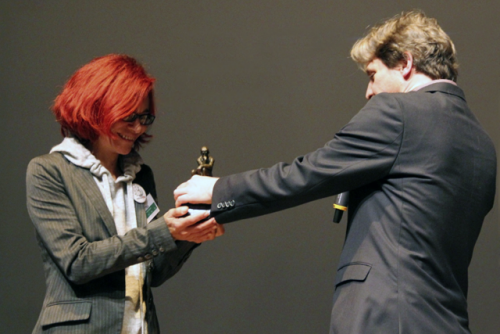 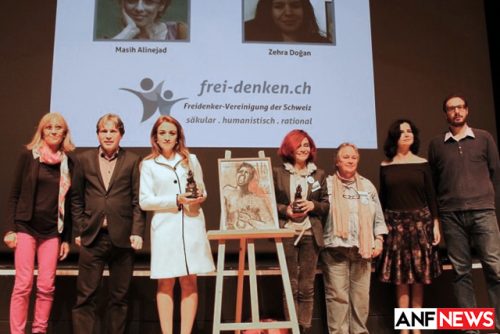 Here is the text that was read by Kedistan magazine’s journalists, acting as Zehra’s emissaries at the award ceremony:

Due to visiting rules and internal communications in the high security prison in Diyarbakir prison where she is held since June, we were able to transmit this good news to Zehra last Friday only. She could not write a text to thank you but we can tell you she was very pleased to receive this prize. But since we do not want to talk in her stead, we shall read you a small compilation of excerpts from her recent letters.

“Since the prison administration wouldn’t give me my material, I had to find alternatives. And I realized that I had everything on hand. I use wrappers, garbage and food. I produce the colors from natural sources. For example, olives provide me with black, tomato paste gives me red… I crush parsley for green… turmeric provides yellow. There is tea, coffee… and honey for glue. For paper, we are allowed notebooks and writing paper. So I use newspapers, but also all kinds of wrappings. The cardboard from boxes of cookies, the aluminum foil on containers… For special effects, I also use the foil from packs of cigarettes.

I focus on the Middle East. I would like to further my knowledge of history, culture and regional mythology. I set aside 4 hours every day with one of my co-detainees to write a novel based on her life story. I draw and I paint whenever I can. And I’ve also started giving drawing classes to my friends here. In a way, I socialize art in my fashion. They love to draw. Soon, I’ll be able to teach them how to make a paintbrush out of bird feathers found in the yard.

I wouldn’t like you to imagine a sad-sack withdrawn Zehra, wasting her time. I write to tell you everything I do here, so that when you hear and pronounce the name Zehra, you picture a woman with a strong morale and hope, someone who is strong and upright.

Every morning we assemble for a reading session. With the reading of some 300 pages every day, discussions and in-depth study, I think we somehow declare the victory of ‘will’. I think a vital truth exists in jail and that I must express it by my behavior and my modes of thought.

I used to fear that in the absolute darkness of the walls built around me, with no knowledge of my roots, I would settle into the situation, reconcile myself with the persecution to which I am subjected, that I would lock myself into the jail of my inner world.

In this space where everything is constantly restricted, where even a pencil is hard to find, I will learn how to create existence out of a void.

For someone with no reason to live, yes, jail is hard, even very hard. But my reason for living is powerful. This is why these walls become more immaterial for me with every passing day.

No space in the world is totally free. Can you tell me that the space you are in right now is really free? I understand that in your struggles also there is no question of absolute freedom.

And I think that in the search for freedom, women must stand in the front ranks. We must fight with even greater strength against masculine domination that decides how we must live, how we must talk, dress, wear makeup, what size and weight we must be, how we must behave sexually, and even how we must die. But I’m convinced we will shatter those dark glasses they have forced onto us.

“I send you all my love from a little prison filled with big-hearted women, in a town burnt and destroyed, far away from you.

As a woman, dominated by patriarchy and oppressed by a regime that instrumentalizes Islam in politics, just as the former regime called itself secular while imposing it as a State religion, freedom of thought is dear to Zehra. And when the judge had the court condemn her, claiming that her drawing of the destroyed town of Nusaybin went beyond “allowable limits for criticism”, I leave you to judge what freedom is left in Turkey.

I thank you on her behalf.