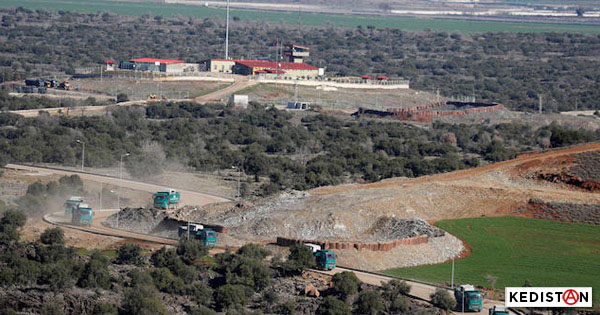 A slew of conditionals have appeared in recent news reports,  published as if they were truths, concerning Afrin and Northern Syria. “A secret agreement would have been reached with the regime for deployment of the Syrian army in Afrin.”

Here then, we have the “Kurdish terrorists” who, after making  alliance with ISIS, according to ministers and officials of the Turkish government, would now be allied with Bachar, as an attempt at survival.

The simplest is to go to the sources, the administration of the Northern Syrian Democratic Federation, and listen to the words of its co-president Hediye Yusuf, spoken yesterday (note to English readers: the English translation of her words is slightly awkward but the meaning comes through nonetheless):

“ In the frame of this resistance and on a political ground, there is no dialogue with the Syrian regime. Therefore, for the future of Northern Syria and as we said already before, we are ready for dialogues. But to the present time there is no such discussion. There is nothing like the things that are being said such as handing over Afrin to the regime. These things are not true and have never been for discussion. What is existing right now is a dialogue for coming to a military agreement, so that the plan of occupation through the Turkish state will be thwarted. It is in that frame.“

Is there need to add anything to something so clear and limpid?

After all those tempests in a teapot, orchestrated by the pro-regime agencies in Syria as well as in Turkey, and relayed by a number of press agencies in search of a scoop, a reminder of realities on the ground may prove useful.   Which is what this same co-president does in her intervention, as a matter of fact:

“Against this the Syrian state remained silent. Against the occupation attacks against this territory [in the region of Afrin] it remained silent. As we have already stated before, the Democratic Federation of Northern Syria is a part of a united Syria. So we had made clear that the Federation is a geographical federation and Northern Syria is a part of Syria.

Therefore our position has always been, if there is a possibility for a dialogue that helps to open the way for a democratic solution in Syria we would use this and support this. On the base of a federal system like we have announced in Northern Syria, we think that Northern Syria will play an important role in the democratic solution process for Syria: We are open for dialogues with the [Syrian] regime. The basis of any dialogue is to reach the aim of a democratic solution. Therefore, we had made these declarations already before. Now there is the current situation:“ The resistance of Afrin is a historical resistance. It is the resistance of the century. It has created public attention and thwarts the plans that had been made before. At the same time all people of Syria know the existing reality of occupation. Therefore, now there is a dialogue between the military forces on the base that the Syrian Regime as a state gets involved inside the frame that it should play its role in preventing its ground from occupation.”

This has been a constant in the federal entity’s position, which aims at permitting negotiations to develop some day, not between great powers seeking their share, but at a regional level. The Democratic Federation part has never hidden either that the question of Bachar’s maintenance in power would be in contradiction with such “negotiations”, should ever they occur. For the populations, being realistic does not mean remaining silent over the crimes perpetrated by Bachar’s regime, quite the contrary.

And yet, the People’s Protection Units (YPG) published a press release (on Tuesday February 20) announcing that the Syrian government had sent “military units” to Afrin in order to repulse the Turkish offensive. They added “They are expected to take up their positions on the border and to participate in defending the Syrian territorial unity and its borders.”

These informations may appear completely contradictory. Political and military contradictions are not lacking on the Syrian territory. And all the ongoing propaganda only sheds more light on them.

No doubt calling on the regime’s intervention, even while establishing the rules for such, can be a dangerous strategy in such a totally hostile environment. But who are we to pass judgment on this complexity?

The Turkish regime no longer hides its intention of supporting the implantation of a permanent zone of influence in Northern Syria via the re-establishment of Islamic groups it has armed and continues to arm and has been striving to unify against the Syrian regime for the past five years. In this, Erdogan’s constancy has been the same since 2013. The plan remains the same, from the concept of a buffer zone to that of today’s instrumentalization of Syrian refugees he proposes to re-settle in the area: to prevent the unification of Northern Syria, to favor and push into the Syrian process allies under his boot. This is the only way the Turkish regime can avoid alliances of the great powers in its back which, in his view, would re-introduce the Kurdish component rather than his accomplices ” free Syrians”.

At the international media level, playing on the necessary question of the “refugees’ return” and their settlement in what would be, according to Erdogan “a secure zone freed from its terrorist YPG” is part of the arguments put forth in the propaganda war intended for the European countries and the refugees themselves, whose situation in Syria and in Turkey is deteriorating considerably after so many years of war.

The Northern Syria Federation is a political entity the strength of which rests on proposals it has not ceased applying in the territories it presently occupies, even more so since the quasi-total military victory against ISIS, still left unfinished since the Turkish intervention. Those proposals are those of the initial Rojava, for a mutual space of living together in a regional mosaic, precisely that which the dominating powers do not want.

It is obvious that this political project is living through its greatest threat since Kobanê. The resistance of the canton of Afrin is thus of historical import and a deciding factor for the future.

A great number of civilian populations are threatened. The Democratic Federation’s responsibilities must thus be exercised both in resistance and armed self-defense, and in the search for means to play upon the contradictions of the dying Syrian nation-state and its allies, in order to limit the massacres.

The major international news media would be well advised to insist on the necessary end to the bombings and exactions of the Turkish army, as well as against the crimes of its Jihadist allies, rather than speculating on the end of the democratic experience, an end that would only open a new chapter in the war.