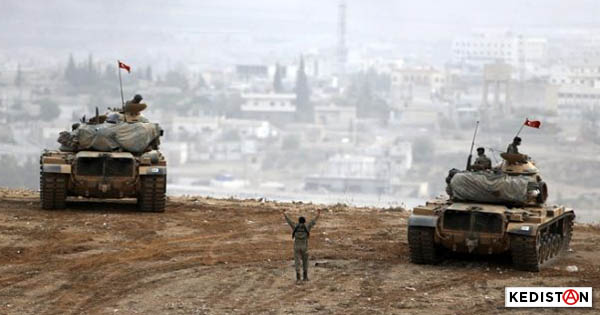 Aleppo’s agony caused any number of political controversies, against a background of « compassion”, combining pro and anti Bachar regime propaganda and real questions by legitimate humanists.
Yet, as we approach the anniversary marking the beginning of the « Syrian uprising », this great « I am Aleppo » surge has almost disappeared from the media and social networks.

Two recent reports have appeared in quick succession. One on « torture and hangings in Saidnaya prison »* and the other on « chlorine bombings » on the population of Aleppo. They are brutal reminders, as if such were needed, that war criminals, or their representatives and allies, will sit at the next Peace conference being prepared in the wings.

And it will be hard to instill forgetfulness especially since other war crimes were perpetrated by Jihadist groups, those allied with the Turkish regime as well as those armed by the Gulf, intent on confiscating this « Spring » transformed into a civil war.

The future negotiation table between great « international predators », along with local and regional enemies with pretensions to hegemony and pseudo representatives of the « Syrian rebellion » designated by them, will have all the appearance of a mafiosi round table, where cards will be shuffled concerning the future of a region already divided into Nation-States a century ago… on the occasion of the dismemberment of the Ottoman Empire. The Peace of the Forty Thieves, replayed at a century’s interval.

The hundreds of thousands of victims, the millions of refugees will have to be content with this geopolitical reshuffling… Thus, a process which, at its inception contained Middle Eastern revolutions in the plural, would end after the bloodbath by a search for imperialistic and regional compromises – compromises of which one can’t detect the beginning of a beginning – with, once again, no concern for the fate of the local populations.

One might object that this is a cheap short-cut against a quasi-conspirational background…whereas the topic is the search for peace. But no matter how much one may wish to convince me that the Islamist State has almost completely disappeared already, that it no longer has anything to do with the war in Irak, that Mosul will be its grave and Raqqa it’s final battle, I can’t help but think that ISIS is not only the band of international crooks described everywhere, but rests on real political foundations, and both feeds and lives off of them.

And the radical impasse it constitutes for the peoples flourishes on the ruins of Middle-Eastern nation-states as well as on those of African ex-colonies, also mired in corruption and well-tended « ethnic » violences. And I’m supposed to believe that Putin wishes to break from all that ?

« Terrorism » would thus stay suspended, like a menace hovering over occidentalized societies ? And these same societies would have nothing to do with the rottenness, including Russia’s, causing and feeding it ?
« Your wars, our dead » many radical European leftists said and wrote after the Paris attacks in November 2016. I still share this point of view.
All right, ISIS won’t have a seat at the table…We are reassured. The discussion will be among high-class killers, between established « pacifist » arms merchants.

But these wars have not only produced political impasses for the future of the populations in the region.

If the aftermaths of Irak’s disintegration – a country formerly created with a ruler – only results in private preserves where the Iranian neighbor will exercise its influence, and where a Kurdish quasi nation-state will take possession of the lands and the fossile riches – even at the cost of ethnic
“clarifications” – this is not the case for Syria, on the one hand, nor for Turkey, its current best enemy.

The Syrian war has pushed peoples to unite for their survival and to find solutions for their defense and their social organization.

The presence on these territories of an organization trained in armed struggle over decades, politically straddling three borders, and capable of self-reappraisal has been a determining factor in the establishment of an original political process in Northern Syria. To think even for a second that in the turmoil of this war it would have been possible to envisage shelter zones for millions of people and relative protection for others without the PKK , would be to be blind to the way political Jihadism, the political manipulation of Syrian resistance by armed groups, the country’s trusteeship under the powers of the Gulf, Turkey, and American and European influences, have had the better of the extreme weakness and division in the initial uprising.
No matter what criticism may be adressed to it by one or another, the fact a political project existed in Northern Syria has now saved populations in great numbers, and allowed for a process of democratic unification between them. And if, in Aleppo or elsewhere, this has often rested on confrontation, this is also due to the destructive force of the factions supported by Turkey, and of others supported by the regime and its Russian and Iranian allies.

No one can deny that. And the « international » persistence in keeping the PKK on the black list of terrorist organizations is the perfect illustration of these States’ political choices, as they are aware of the budding political and economical stakes.

If Aleppo was a « military » severing resulting in a « cease fire » declared in an ongoing war, two crucial places of armed confrontation will probably also represent breaking points that could result in the big table of Geneva thiefs following the parody in Astana. 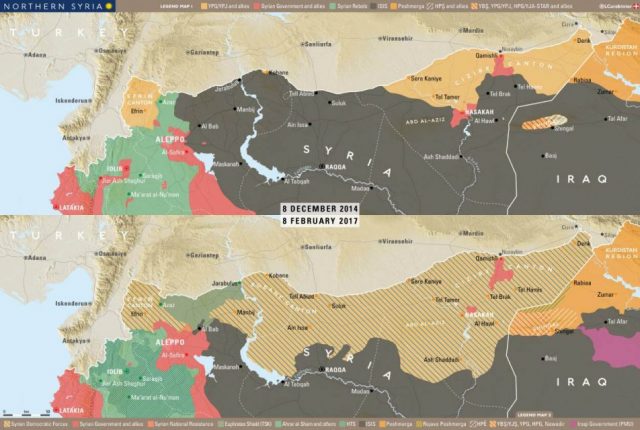 We mean Bab and Raqqa, of course.

For those who consult regularly the weekly news bulletins on Ronahi TV, broadcast in partnership with Kedistan, there is no need for me to do a factual « military » update. And this is not the purpose of my column in any event.
I can only rely on information appearing in the media and on the web, along with the clarifications and commentaries they arouse, be it by the political leaders involved, journalists and political activists, read and overheard, here and there. And I am ready to acknowledge any excessive interpretation on my part, insofar as I’m given the reasons for my mistakes and the counter-information.

For the forces in the North Syrian confederation, the SDF (Syrian Democratic Forces) and the DUP (Democratic Union Party), the advance on Raqqa does not constitute per se a will to limitless territorial expansion in Syria. It is mostly a demonstration that ISIS can be fought and forced into its last entrenchments by a Syrian force other than that of the murderous regime, and one unaffiliated with Turkey colonial aims.

This show of strength is also in answer to the need to liberate populations who often have fighters in the ranks of the SDF.
It also constituted a military consolidation, via the SDF, of a confederalist pact against the Turkish objective to disrupt the possible territorial continuity in Northern Syria, and to continue to cause harm both to Rojava and in the tangled Syrian mess, from positions conquered after the irruption in Jerablus. In this framework, an operation in the direction of Raqqa is also the best « military » response.

I remind the reader that this offensive began under the presidency of Obama, and with logistical commitments, now more or less « frozen » by Trump. Bab is a strategic crossroad. And up until recent days, Turkish forces and their various supplementary allies seemed to be encountering difficulties in front of ISIS. This resistance and this factual temporization may appear surprising given the fact that, in surrounding localities during these past weeks, everyone was proceeding to « occupations » and « re-occupations » with the corresponding seizing of weapons. There were even announcements of a possible « rout » of the Turkish forces in mid-week last, and the arrival of governmental forces at the same time, heavily supported by Russian air cover. This didn’t stop these same Turkish and supplementary forces making further civilian victims in the area and pursuing their threat on the canton of Afrîn.
Some « unfortunate » bombings killed Turkish soldiers. The Russians acknowledged, the Turkish government yielded in abeyance… And we are now witnessing the reconquest of Bab, partly by Turkish forces, partly by those of the regime. While governmental authorities declare their intention not to abandon their objective of seizing Raqqa, discordant voices call for consolidating positions in Bab… We can surmise that Russian bombings have something to do with this, as does the promise to prioritize the « safe zone » called for by Erdogan. Trump would be studying the insane « project » of Syrian refugee camps in the zone…
In other words, everything points to “coalitions” not being a Raqqa priority, but rather the consolidation of existing power balances in the perspective of a « big table », no matter how premature in the absence of an after-ISIS political plan.

And yet, a political solution is proposed for one part of Syria.

And what we can point out immediately is that this proposal is turned down by all.
During the military operations, and behind them, the Northern Syria Confederation has widened its political consensus and refined its « confederal » proposals for a settling of the war in Syria, and beyond. The last conference of the active forces in the North Syrian Federation were an important step in this direction, going so far as discussing the choice of the administrative capital and of the confederation’s name. And if I continue to use the term “Rojava”, the confederal decisions now go beyond it.
Russia had proposed a « federal » structure for a future Syria, giving « rights » to the Kurds, and also giving the brief impression that Putin had suddenly developed an autonomy mind set…while consolidating Bachar’s regime.
Rojava representatives largely turned down this proposal and responded with the call to an international conference to examine a confederalist project for Syria, and more specifically, that of « Democratic confederalism » long propounded by the DUP. Therefore, the DUP will not be invited to the next rounds of negotiation, replaced by another tendency in the Kurdish National Council, one more « conciliatory » and closer both to Barzani and the Sunni anti-Bachar opposition.
Nonetheless, a conference was called in Moscow on February 15 with the participation of Kurds from Iran, Turkey, Irak and Syria…
Here, I must admit my lack of expertise on this specific topic and my need to study further what are not only « nuances » among the Kurdish political partie in Syria, complicated further by the incessant involvement of an Iraki Barzani…
I’m thus open to any elements that might provide me with light on the topic, other than propaganda…(Of that, there is a swarm…)

I will conclude with this open-brain reflection, even knowing it is partial and filled with short-cuts, about the obvious power plays and the dangers that threaten.

The Northern Syrian Federation, and Rojava at his heart, while refusing the possible keys to a Middle-Eastern future, are more than ever at risk of every possible blackmail. Military advances will no longer suffice. And we don’t see the appearance of any international support, just as we don’t hear many outside voices raised against Erdogan’s internal policies against Bakur and democratic opposition in Turkey.

It thus appears to me more necessary than ever to document here Rojava’s political project, the peace proposal it represents, and the dangers threatening this fragile process. Our role is to present this positive democratic experience, bearing a peaceful future for the Middle East, and not only to rehash the military refrains or to be drawn into useless negative discussions in a vacuum.
Should it appear tomorrow that Rojava – and beyond it, the project of Northern Syrian confederalism – disturb the plans for international sharing of the spoils and if those threats become more precise, the need for essential support will grow accordingly.