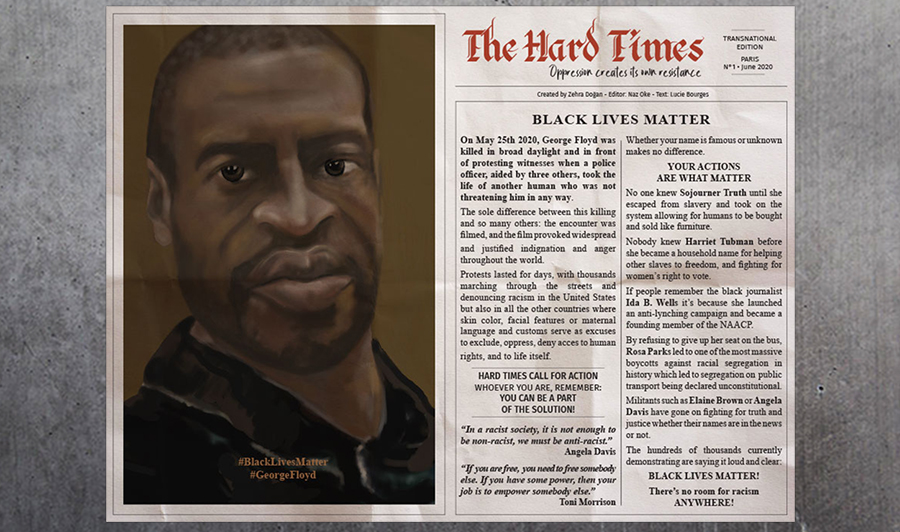 Zehra Doğan wanted to participate in her own way to the world-wide mobilizations set off by the killing of George Floyd in the United States. She did so from a distance, in Paris, on Rosa Parks wall, with the first edition of a wall newspaper: “The Hard Times”.

At a distance, because she is not welcome these days in the United States, considered there as potentially “dangerous”, because of being sentenced to jail for a drawing she did of the town of Nusaybin, destroyed by the Turkish armed forces. This same drawing was projected on New York walls by street artist Banksy, above the mural he produced at the time in order to draw attention to her imprisonment.

Artist and journalist Zehra Doğan, now a free nomad in Europe, knows in her body – because she was born a Kurd – what it means to see your life negated by others, in unidimensional State systems of oppression, as the one in nationalist Turkey. Racism that prevails as the ideology there allows considering the other as inferior, without an existence of his or her own.

In her letters from prison, she described as an example, how her eyes discovered racism very young as a child when she encountered it in school, or under the guise of billboards illustrating a venue where Kurdish laborers gathered and which read: “The dogs’ place”.

And so, encountering George Floyd’s public assassination, encountering the face of the murderous policeman, so sure of his impunity, she could not but feel the surge of anger, first, and of sisterhood, immediately after. The history of oppressions and dominations has its racist cohorts, justifying the unspeakable and under an oftentimes mono-colored “universalism” negating all reality where necessary.

Zehra is both a journalist and an artist. Thus, this is how she reacts to the world-wide emotion and acts in her own way. And this action serves as the beginning of a series of others. For the “dark times” are legion, everywhere in the world.

She also wanted that this action always be collective and, in concrete terms, that it take form each time as physically close as possible to events, and involve locals, as here in Paris. Our thanks again to them.

THE HARD TIMES | Oppression creates its own resistance 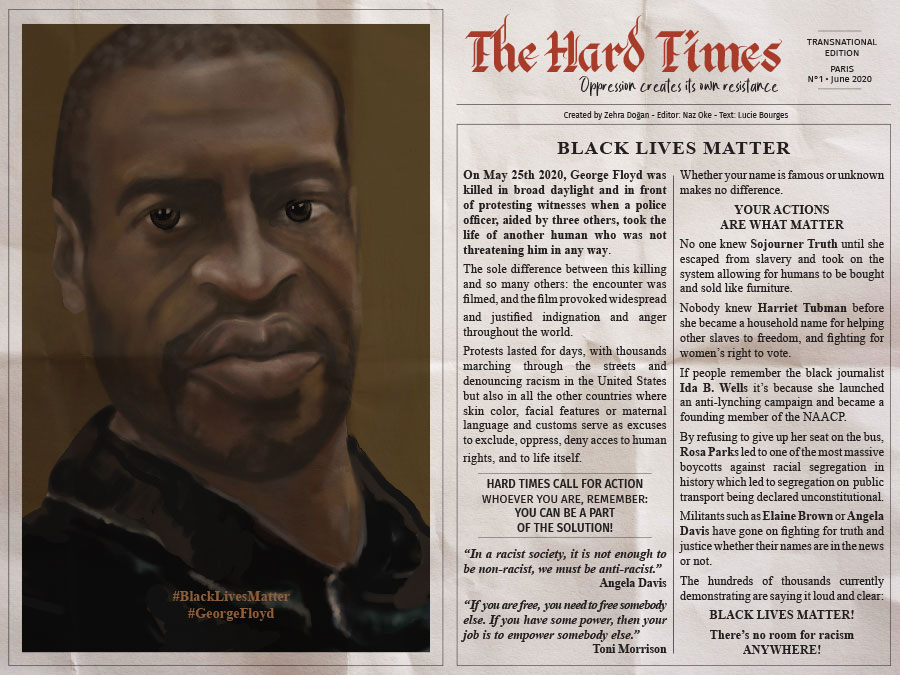