Kedistan is a webmagazine with an original and libertarian attitude, treating of Middle Eastern news in general, of Turkey more specifically, of cats, of sub-Mediterranean culture. And, every time, of equal parts of humanity, women and men both. 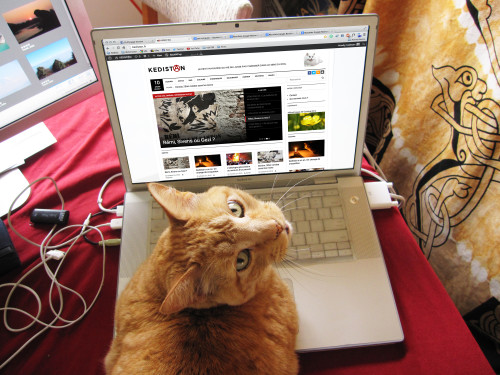 Kedistan, is also a teeny-tiny platform that aims for openness and collaborativeness and that relies on a small team : which means that the magazine belongs to no one. Or rather, it belongs to all those who keep it alive: its editorialists, its translators, its correspondents, its photographers, its technicians, sometimes the same functions belonging to the same person, and sometimes it relies on the wider network. Without forgetting, of course, the most important ones without whom Kedistan would have no reason to exist : you, its readers…

We have an “inner conviction”: that of a close relationship between this part of the world and the rest, a relationship built over centuries of history and still an active hub for a number of reasons. We could spend all of our time talking about those reasons, attempting to throw light on them, to uncover them, poles apart from conventional “Eurocentrism”, or of the wooly theories concerning “vast plots of world domination”.

If you visit Kedistan, it is because you come looking for information on Turkey and the Middle East, other than that served up on mainstream medias, without giving in to cultural shortcuts or muddleheaded notions. Here you will find neither the stereotyped jargon of parties or groups that exist for that purpose, nor a cliquish mentality, be it of a libertarian slant.

And of course, if you come back, it is because you defend liberty, the utopia of a better world… and because you love cats.

Welcome then to Kedistan, the magazine that still believes another world is both possible and necessary, and that fighting for it isn’t a waste of time; it is existence.

On October 1st 2017, Kedistan will celebrate three years of existence and feels more motivated than ever.

If you wish to support us, there’s an ongoing fund drive. Even one euro is useful, little streams make for big rivers.

The “stan” suffix simply means “garden”, in the sense of “country” or “land”. Thus, Turkmenistan is the land of the Turkmens ; Kazakhstan, that of the Kazakhs…The kedi, represent an entire species. That of the “Kedi”, the cat.

But why “Kedistan” specifically concerning the Middle East ?
Well, you have all seen photos of the cats of Istanbul or Ankara. If nothing else, those cats living in freedom would justify the name. But let’s go back a bit further…

More than 10 000 years ago, migrations brought humans to populate an area one archeologist called later the Fertile Crescent. This designates a region of some 400 000 to 500 000 km². Presently, it stretches across some dozen or so States : Lebanon, Cyprus, Koweit, Israel, Palestine along with parts of Jordan, Syria, Irak, Iran, Egypt and, of course, the southeastern part of Turkey (Anatolia). It is no accident if humankind chose to settle in the “Fertile Crescent” since the region offered a favorable climate and was vastly irrigated at the time by 5 great rivers : the Jordan, the Orontes, the Euphrates, the Tigris and the Nile.

To summarize, sedentarization transformed the nomadic hunter into a cattle breeder and farmer. This region was the birthplace of a flourishing agriculture, as happened in other lands of migration later. The building up of cities developed agricultural needs greater than those for nomadic populations. In fact, traces of this human colonization are being erased in Irak partly by bearded and very self-interested barbarians.

This “agriculture” already developed the notion of “yields” and “stocks” since the need to feed the cities made it necessary to protect the crops from rodents. Unless it was the cat himself who discovered the rodents hard at work. This is probably how the cat became domesticated, without losing his free spirit. And if skeletons of our companions were discovered in tombs all the way to Crete, it is because humans bound their fate to the animal, or vice-versa.

In short, we only speak about the country of the cats, KEDISTAN.

And the capital Ⓐ in all that ? It “bothers” a lot of “serious ones”, you will find an explanation for it HERE.