Sponsoring Turkish detainees at the initiative of DJV-Hessen 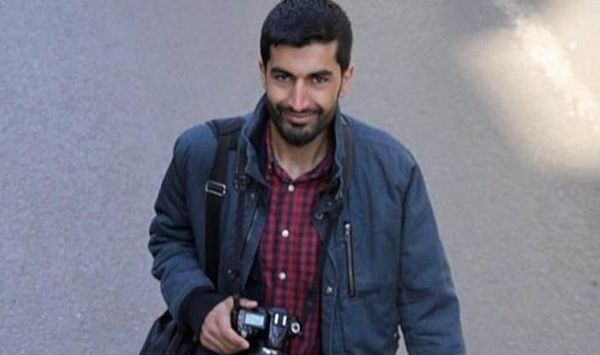 The Association of German Journalists (DJV) of Hessen has begun a sponsoring campaign for journalists imprisoned in Turkey.

As part of this campaign, our friend and colleague Nedim Türfent is being sponsored by Sylvia Kuck, President of the Wiesbaden section and member of its board of administration.

The Turkish Court of Cassation having confirmed the verdict of October 9 2019, Nedim Türfent, a journalist of the DIHA agency, is currently serving a sentence of 8 years and 9 months in prison. He was condemned on invented terrorism charges following an inequitable trial during which dozens of witnesses declared they had been tortured in order to testify against him.

Incarcerated since May 13 2016 in the prison in Van, he continues to write with determination during his captivity.

His collection of poems in Turkish “Yaşamın Tutuklu Sayfası” (The imprisoned page of life) was published in June 2020. The preface is by Ege Dündar from PEN International and the cover page is a drawing Zehra Doğan had done for Nedim on one of the sheets from the penitentiary administration, while she was incarcerated herself.

The Association of German Journalists of Hessen had already sponsored other journalists and authors such as Deniz Yücel, Can Dündar, Meşale Tolu and Zehra Doğan to whom it had awarded the “Pen for freedom of the press” in 2018 while she was still in prison.1Blick Punkt – Ausgabe 2-2018 Page 15

Here is the appeal by Sylvia Kuck, published on the association’s website.

Wiesbaden, March 5 2021 – The Association of German Journalists (DJV) of Hessen wishes to concentrate on Turkey. More than 50 journalists are imprisoned without trial there. The Erdogan government accuses them of terrorist propaganda. “But in fact, they were only doing their job,” declared Knud Zilian, President of DJV-Hessen. “Colleagues are in prison because they reported on what they saw and experienced, but this does not suit Erdogan and his AKP.”

The members of DJV are committed to the practice of independent and critical journalism. As there are practically no free media in Turkey like those in Hesse and in Germany, they wish to support their imprisoned colleagues with cards and letters. This also helped Deniz Yücel, journalist at “Welt” who has roots in Flörsheim in Hesse. This correspondent was liberated from Turkish prison in the summer of 2018. He supports the action of DKV-Hessen, because “solitary confinment, being cut off from the outside world is the most brutal thing imaginable.”

In Deniz Yücel’s case, solidarity actions, sponsoring, including those from DJV-Hessen, helped. The same is true for Can Dündar, Mesale Tolu or Zehra Doğan. In 2018, DJV-Hessen had awarded Zehra the “Pen for media freedom”. At the time, the Kurdish artist and journalist was in prison in Diyarbakir. Shortly after her liberation, she exhibited in Wiesbaden works created in prison.

“Give your support ! We will pass on addresses and will accompany you in your action !”