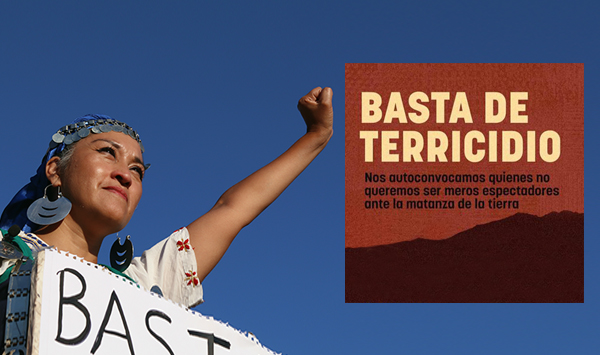 Moira Millán is one of the women leaders in the Mapuche people’s fight for the land and for freedom. She is one of the important people representing the Mapuche women’s movement. Protectors of nature and historical resistants against the Incas and the Spanish colonizers, the Mapuche are an “autochtonous people” of the South-American continent. Their presence on these lands goes back several thousand years. Yet their legitimacy is constantly brought in question by the Chilian and Argentinian governments, leading to massacres and massive delocalizations.

Moira and her friends recently called for support. We relayed their call on Kedistan.

Here is Moira Millan’s video in Castillian, and its translation below.

On March 20th, we are beginning a march toward Buenos Aires for the recognition of terricide as a crime, a crime against humanity.

People from 36 of the indigeneous peoples of Argentina will begin this historical march on Sunday March 21st,  aiming to raise public awareness on the impacts of the current developmental model on the environment.

An important segment of humanity has come to realize that we cannot go on living the way we do now. Thus, the project aims at  constituting a great caravan which will make its mass arrival in Buenos Aires on May 25th, day commemorating Argentina’s first cry of independence.

This great march which will begin in Northern and Southern Argentina will carry historical connotions since a document will be handed over to the government of this country demanding that terricide or damages to the environment be legally considered as a crime against humanity.

This would constitute a novel precedent for the world because, up until now unfortunately, terricide firms and governments pay nothing for the irreversible damages cause to the Mapu1land, territory, country, to the Pacha2universe, cosmos, time and to other populations. This would thus allow the possibility of bringing a judicial instrument to bear on the problem, judging, sanctioning and condemning these firms and these governments.

The term “terricide” is a concept encompassing the effects against the environment, the damages to the indigeneous nations’ culture and the deterioration in these populations’ outlook on the world.

Terricide is a concept that synthesizes the indigeneous peoples’ cosmovision, a tridimensional outlook on life, for practically nothing is acknowledged of our ancestral medecine, our spirituality. What we consider our philosophy, such as the cosmovision, is not forbidden but neither is it acknowledged.

The forest fires occurring these days are one of the main factors motivating the reaction of native communities. They have not only affected the residents but also the ecosystems in these regions.

Taking into account all the blazes, approximately 60 000 hectares have been burned  down. Hundred of families have lost their homes and there are also the dead and the disappeared to take into account. It is terrible.

The arrival of this march in Buenos Aires is planned for May 25 as it aims to coincide with the date on which the revolution and independence will be commemorated in this country.