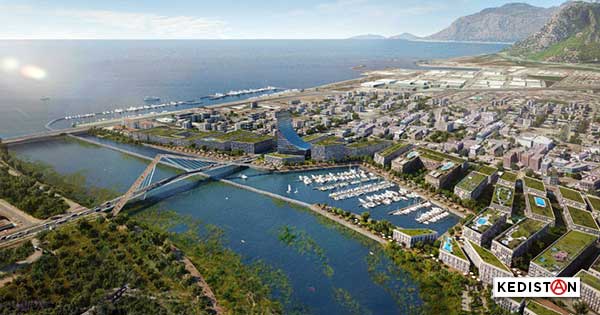 Had I not translated a document on this topic for Kedistan a few weeks ago, I might have missed today’s article in The Guardian from London. The article is titled  Erdogan’s ‘crazy project’: new Istanbul canal to link Black and Marmara Seas.

The Canal Istanbul project was approved by the Turkish Ministry of the environment last month. Approximately 45 km long, it would link up the Black Sea and the sea of Marmara, and run parallel to the Bosphorus already crossing Istanbul.

1) The saline content of the Black Sea is less than that of the sea of Marmara. It is also on higher ground, thus insuring that the opening of this waterway will lead to the modification of the salinity in the sea of Marmara and, over some thirty years or so, causing catastrophic consequences on its ecological system. Of course, anything that involves “some thirty years” is of no interest for politicians only concerned with their pocket book, and since all of them will have died by then, why should they care? May the Great Flood come…or drought or famine or a cloud of locusts, they could not care less.

2) Part of the project threatens the city’s water supply. Sazlıdere and Lake Terkos have been providing a quarter of the city’s drinking water since Roman times. If these reserves are lost, there are no alternatives on the European side of Istanbul. Water will have to come from the Sakarya River on the Oriental side. An expensive proposition, and one with heavy sanitary risks since the river crosses the town of Ankara as well as many highly polluted industrial zones.

3) The canal will also destroy the Küçükçekmece lagoon, an important stopover point and nesting area for migrating birds such as flamingos, imperial eagles, grey herons and Cetti’s warblers.

Over 70 000 people have signed a petition opposing the project.

In January, the ministry approved it, with projected costs of close to 12 billion euros.

Ask yourself who will profit from it if there’s still need to light your lantern.