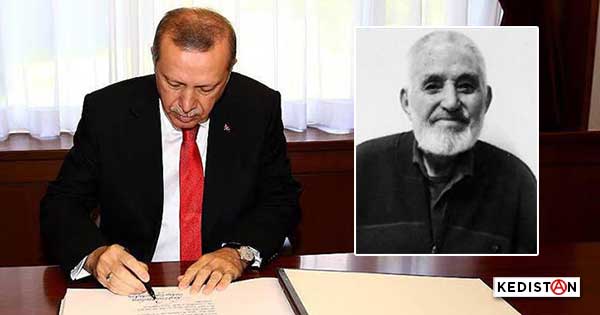 President Recep Tayyip Erdoğan pardoned a man found guilty of participation in the massacre in Sivas in 1993 that caused the death of 35 people.

Ahmet Turan Kılıç is one of the authors of the Sivas massacre.

These assassinations occurred when a hate-filled crowd set fire to the Madımak Hotel in the province of Sivas in central Anatolia on July 2 1993, killing 33 intellectuals and two hotel employees. Ahmet Turan Kılıç was sentenced to death then; with the abolition of capital punishment in 2002, his sentence was commuted to incompressible perpetuity.

Last January 31, Erdogan lifted the sentence imposed on this man – who is now 86 years old, because of “the health problems affecting him” – in conformity with paragraph 16 of article 104 in the Turkish Constitution.

The attack against the Madımak Hotel targeted a group of artists and academics participating in a conference organized ty the Cultural Foundation Pir Sultan Abdal (PSAKD), an Alevi organization. The event took place at a time when writer Aziz Nesin, who was among the guests, had become a public target for his Turkish translation of Salman Rushdie’s Satanic Verses. Among those killed in the criminal fire of the hotel were poets Metin Altıok, Behçet Aysan and Uğur Kaynar, writer Asım Bezirci and the Dutch anthropologist Carina Cuanna, as well as popular Alevi musicians Muhlis Akarsu and Nesimi Çimen. A crowd provoked by a certain number of local political leaders and assembled outside the hotel accused the conference participants of being “unbelievers”.

Other than the 35 people who died in the massacre, two demonstrators in the crowd outside the hotel, where the events led to the fire and who were watching the hotel while the people inside burned and called for help, also died in the fire.
Requests by the families of the victims that the Madımak become a “museum of shame” were never acknowledged. Nonetheless, this building became a symbol of the discrimination confronting Alevis in Turkey. It was expropriated in 2010 and transformed into a “Science and Culture Center”… 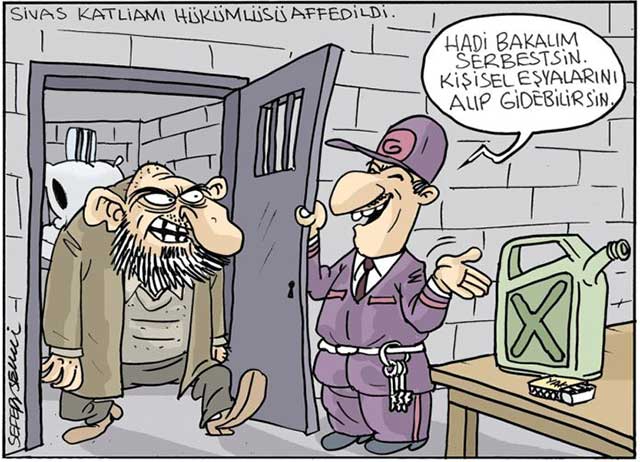 The man convicted of the massacre in Sivas is pardoned.
– “There, you are free. You can gather your personal belongings and leave.”

And other sick prisoners?

The number of ill and aged prisoners subjected to shameful conditions of incarceration is so long it would provide a list even longer than that of jailed journalists. A great part of these detainees are of Kurdish origin and their detention to long sentences has carried across regimes, from those of the army to the current one. Other cases are more recent, of persons condemned who were already ill and sentenced under the sacrosanct label of “propaganda for or belonging to a terrorist organization”. Other cases involve LGBTs… In all these cases, the famous article 104 of the Constitution seems to be ignored.

But here, as soon as religious pressures intervene, and in this case for a “controversial” massacre in the eyes of the bigots in power, the call to the Constitution crowns a well-orchestrated campaign. In order to do so, the victims are crucified once again. Nothing here but the most humane of decisions.

Zeynep Altıok Akatlı who lost her father the poet Metin Altıok in Sivas underlined that President Erdoğan had said the prescription on the Sivas massacre was “a good thing” and declared that the assassins were “victims”. She added that, when it proved impossible to have this man liberated for old age and illness, a trial was opened against the medical examiners… “Now, he has been pardoned through the President’s authority.” She mentioned prisoners who are truly ill, “the system does not work for scores of sick and aged prisoners and protects others with special care,” she said with indignation. “I have a question! This man would be the last sick and aged man in jail, thus deserving a special amnesty? If his life permits, he might even become a deputy!”

What do the jurists say?

Lawyer and politician Şenal Sarıhan, a lawyer and defendor of rights, has followed the Sivas case for 27 years and sheds some light on Erdoğan’s decision. She reminds us that during the month preceding Erdoğan’s pardon, the media at his service led an intense and well prepared campaign in support of Ahmet Turan Kılıç’s liberation. Declarations attributed to his son reiterated that Ahmet Turan Kılıç was in no way connected to the massacre, that he was innocent. His age and purported state of health were stressed. Şenal Sarıhan adds “there was never the slightest question of a report from the health commission in his case. I underlined this when discussions began concerning his eventual liberation.”

The lawyer adds “Public opinion knows that some of the condemned authors of the crime have not even been arrested in these 27 years. It also knows that the victims’ kin are deeply wounded by the behavior and subjective comments of the entourage of those in power who almost attempt to prove that the authors of the massacre are those who perished in the fire, and not those who set the fire…” She decares that this man is not in any way “innocent” as his son claims. “It was obvious that the absence of a legal basis for a pardon, such as a health report, was going to deepen the suffering of the victims’ families. Finally, following the announcement of this decision dated January 30 2020, we learned there existed a legal medicine report, bearing nothing but a number and a date. We have no information concerning its content, so we have filed a request in order to find out more.”

In a responsible gesture in order to inform the public concerning the true identity of this man, described by some as a “grandfather” and stressing his “innocent” and almost heroic character, the lawyer shares the testimony gathered concerning the accused, taken from the trial proceedings registered at Ankara’s Tribunal N° 1. Several witnesses declared before the court that the accused “was there from the beginning to the end of the events and acting as a crowd leader,” that he was chanting slogans such as “Allahu akbar”, “Aziz (Nesin) the devil”, “Sivas will be Aziz’ tomb”, “Even if they shed our blood victory to Islam”, “The sharia will come, the persecution will cease”, that he “called the people to Jihad”, that he “was also among those throwing stones against the hotel’s windows”, that “he was always in the forefront, inciting, leading, designating the targets, that he facilitated breaching the barriers and helped in the task of the authors in the first degree who destroyed the vehicles parked in front of the hotel, ramsacked the interior of the building and allowed the start of the fire.”

* Subtitles : click on the gear icon and choose your language

In fact, it was on the basis of these many testimonies as well as of the videos recorded during the massacre that Ahmet Turan Kiliç had been sentenced for “participation, aiding and abetting.”

A guilty man who participated in the violent loss of 35 lives is now free. “The victims had no right to live, to grow old nor to close their eyes in their home,” says Şenal Sarıhan. “The authors of this massacre did not know the victims personally. Their hostility was thus fed by their convictions against science, secularity, brotherhood, and their beliefs. It is a crime committed against humanity. Can one pardon the author of such a type of crime? No logic in law based on human rights can accept this. Even less so when such an act is committed without the least expression of remorse.” 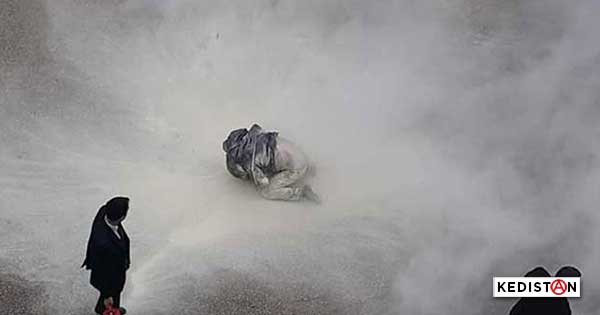