Artists for Rojava is a project that aims, first of all, at reinforcing the social and cultural role of art in solidarity with the Kurdish people and, secondly, at promoting contemporary culture and visual arts.

Artists for Rojava explains the origin of the project in the following terms:

The first action was born with the holding of an ephemeral land art intervention on October 13 2019 on the beach in Barletta: “Save Rojava”.

Following this, with the membershp of DeriveMetropolitane we took part in other events in Italy and abroad…

The subscribers to this appeal accept without reservation the “Appeal from Rojava and Kobanê Universities” and hope that every possible measure be taken immediately to put an end to the military escalation in Northern Kurdistan. We hope that stable institutional relationships with the Kurdish community will be encouraged so that it may be clear that artists, the artistic world and that of culture, actively oppose the violence taking place in those places, understand what an extraordinary garrison for freedom they represent and can still represent as those who resist while continuing to study, to teach and to produce art.

Remaining indifferent to the events is impossible

It is a gesture of active solidarity the urgency of which we feel keenly. We think it is necessary to adopt a radical position against the war Erdogan and Turkey are conducting unjustly, with no scruples, proceeding to the massacre of a people resisting, blow for blow, in order to defend its inhabitants and its lands. 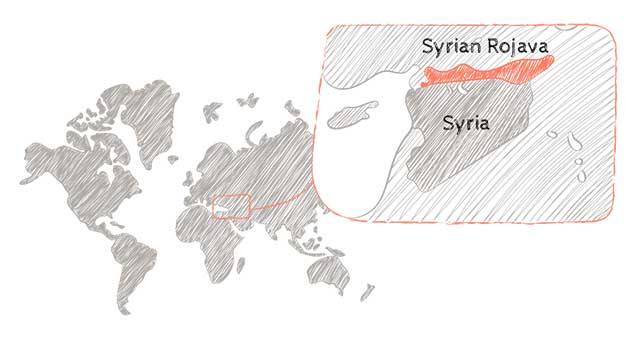 Art and culture cannot remain impassive in front of the war and the attempt to put an end to one of the rare current experiments in radical democracy. If there is one contribution that artists, designers and cultural providers can contribute when faced with these scenarios, it is that of contributing to the creation of empathy and conscience, by supporting also on the financial level projects such as that of a mobile clinic traveling from one region of Syria ato another every day to provide treatment to the innocent victims of an unjust massacre. The struggle of the Kurdish people against ISIS these last few years inspired books, cartoons, songs, films, stories that shortened the distances separating us from these territories and involved a number of persons in support and solidarity initiatives.

More than ever, we must continue to feed the imagination in order to give strength and collective support to this resistance. We hope that the Itanlian government and the European States will take measures to end this massacre, by demanding not only the immediate end of the sale of weapons to Turkey, but also the implementation of all necessary political and diplomatic instruments, the rediscussion of economic and commercial agreements and, in time, the promotion of the creation of a “No Fly” zone in order to stop the bombings and create humanitarian corridors allowing for the care and security of civilians.

We also demand that the Italian government honour its commitments by ceasing the exportation of weapons toward Turkey, as have done Denmark, Norway, Finland, Sweden, the Netherlands, France and Germany.

Art as an instrument of solidarity. What does this mean?

Artists will donate a work expressing their solidarity with the Kurdish people. Participation in this event is free of charge as it must be accessible and affordable for all.

The work proposed will have to be selected by the curator. Thanks to the synergy between the different intervenors – creators, supporters, artists – and the relationship with representatives of the Kurdish community, “Artists for Rojava” will involve citizens in the project with initiatives aimed at broadcasting events throughout the town making the fundraising known through a number of different initiatives : exhibitions, catalogues, galeries on the site of the project, sale of works during the exhibition and online…But also the presentation of books and videos, conferences, as well as concerts and convivial events…

Exhibition curator: Alfio Cangiani
Venue: Ex Palazzo delle Poste in Bari
Purchases:
– On eBay
– Through phone reservation at 330400920 – Giorgio Skoff. One of our members will be on hand at the exhibition at the following times: Wednesday 18h/19:30 and Saturday 11h/12h and 18:30/20h.
– During the auction to be held on February 26 at the Ex Palazzo delle Poste, Piazza Cessare Battisti 1, starting at 18:30.

All the works sold will be delivered to the purchasers at the end of the exhibition and after final payment.

Saturday February 29 from 16h30 to 21h30. Closing event around the auction, concert of Kurdish music, apéritif.