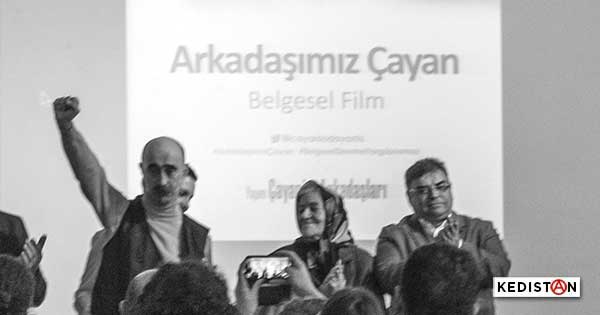 On January 24, the director of the film Bakur celebrated his birthday while on trial. Last Friday night, he was surrounded by friends at the screening of the documentary Our friend Çayan.

Çayan has received awards for his documentaries Dersim 38′ and 5 Nolu Cezaevi (Prison N° 5). Despite the fact he has experienced serious health problems for the past 4 years, he was dragged before the courts for his film Bakur (North)…

On March 18 2015, Çayan’s heart suddenly stopped beating… Hospitalized for months, he is treated to this day for the sequels to this heart failure. While he was fighting for his life, Çayan Demirel and Ertuğrul Mavioğlu were nonetheless sentenced by the tribunal of Batman to 4 years and 6 months in prison for Bakur. During the trial, the tribunal took no account of the medical report declaring Çayan 99% handicapped. The case has been moved to the Court of Appeals since January.

The documentary done by his friends and those who accompanied him with their camera, shows the vital necessity for his ongoing medical care and treatment. As for Çayan, he is not requesting gifts for his birthday, but the respect of his rights as a filmmaker and a handicapped citizen.

The premiere of the documentary Arkadasimiz Çayan took place in December 2019 during the 10th edition of the festival “Hangi İnsan Hakları?” (What human rights?)

Friday night, accompanied by his companion, travelling companion and producer Ayşe Çetinbaş, Çayan arrived in Cezayir hall. Under an avalanche of applause, he raised his left fist on stage and saluted friends and close ones in attendance. The hall was overflowing and as many people were waiting outside for an eventual second projection.

Dersim 38′ followed, exploring the edification of the National State in Dersim in the Kurdish region in 1937/1938 (renamed Tunceli as part of this policy of Turkishness). The film shows how this policy was implemented through the use of excessive force against civilians resulting in the deaths of over 80 000 people. Çayan Demirel combined evidence from eye witnesses, survivors, historical research, official documents and media reports from that period in order to determine if what happened in Dersim had anything to do with a genocide. After 5 years of work, this thorough documentary was made public. [Watch Dersim 38′ in Turkish]

In 2009, Çayan pursues his journey with the documentary 5 No’lu cezaevi (Prison N°5) about Diyarbakır prison. The film relates the period following the military coup of 1980 in Turkey, and the deaths in prisons due to the squalid conditions and torture (299 persons). [Watch 5 no’lu cezaevi in Turkish]

In 2013, Çayan directs Dr. Şivan, a documentary tracing the life and death of Dr. Şivan while shedding light on the recent political history of the Kurds. Sait Kırmızıtoprak, alias Dr. Şivan, a renowed medical doctor, became a leading figure of the Kurdish movement in Turkey following his assassination in 1971. He was from one of the families assassinated during the Dersim massacre in 1938. [Watch Dr. Şivan  in Turkish]

As for Bakur…
In 2013 during Newroz, the Kurdish Spring Festival, following the reading of a letter from Abdullah Öcalan, the PKK leader, the organization’s withdrawal was announced at a press conference. Journalist Ertuğrul Mavioğlu was also in attendance… Çayan and Ertuğrul then set to work filming the withdrawal of the guerilla into the mountains in order to archive this historical process in a documentary. [Watch Bakur with English subtitles]

Shortly after filming, the “equilibrium” changed in Turkey and the withdrawal stopped. The documentary then transformed into a testimonial on the daily life of the guerilleros in the mountain, while narrating the history of the PKK.

Çayan finished his work in two years and turned the film over for post production on sound and color to Sedat Yılmaz. On the following day, March 18 2015, Çayan suffered a malaise on the street near his home in Beşiktaş Istanbul. With no previous history of cardiac problems, his heart stopped beating. After half an hour of relentless heart massage, two medics who were passing by totally by happenstance succeeded in reviving him.

He was hospitalized but suffers from serious neurological deficits due to lack of oxygen. He has memory, speech and motor problems.

While Çayan deep in coma fought for his life, the Istanbul Film Festival announced that Bakur would be shown during its 34th edition. However… the screening was cancelled the day before the screening, supposedly for “lack of the exploitation visa”. All the Turkish films in the Festival then pulled out as a reaction… Bakur found its audience later, during galas organized in Istanbul, Diyarbakır and Izmir and it was shown on May 4 2015 in Batman in the Yılmaz Güney cinema.

During this whole period, Çayan was still in a coma, following which he spent 5 and a half months in intensive care. His treatment continues to this day.
Two years after the screening in Batman, a trial opened against Çayan Demirel, Ertuğrul Mavioğlu and Dicle Anter, (who organized the screening), on the grounds of “propaganda for an illegal organization.”

Despite the report describing Çayan as 99% handicapped, the verdict on July 18 2019 sentenced Çayan and Ertuğrul to 3 years in jail. Because it was “a crime committed by audiovisual means”, the sentence was increased by half to 4 years and 6 months.

Their lawyers appealed. While the file awaits a hearing at the Court of Appeals in Gaziantep, they are on parole with a prohibition on leaving the country…

Ayşe Çetinbaş underlines the absurdity of the trial. “At the time of the screening in Batman, Çayan was in a coma”, she says, noting that since he was not there, he should not be accused for the organization of the screening. “If the screening wasn’t the problem and the film was, then the trial should have taken place in Istanbul were the two directors reside…” 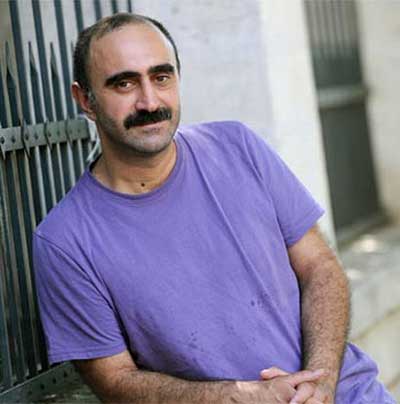 She adds there is no prohibition on the film. “In order to screen a film, in principle you must request an exploitation visa at the Culture Ministry. We had not reached that phase yet, so the request had not been filed. When we consult the Ministry, they answer “no, the film is not prohibited since they haven’t filed their request.” Since the trial was first opened because of an independent film, we did not stress Çayan’s medical condition. The fact that a documentary film could be put on trial and criminalized was a problem in itself which is why we raised our voices on that issue.” More specifically, Ayşe adds “But of course, we had filed with the court all the medical documents concerning his condition. The police came to the house to record his statement. But Çayan was unable to answer them. I then brought in the health reports. The inquest moved on to a trial against him. We filed his handicap report, the Health Commission’s report… But the tribunal took no notice of them. At the final hearing, our lawyers were unavailable and apologized to the court. The tribunal rendered its verdict in the absence of a defence.”

“With his severe handicaps, Çayan cannot handle even his most basic needs. He must absolutely not be left alone. He has trouble walking seeing… This being the case, he is in no condition to be incarcerated, but this is Turkey…” Ayşe explains. “We brought Çayan to the tribunal twice so the judge could note his condition. It was clearly apparent. We thought the tribunal would pronounce its judgment taking this into account. On the contrary, the verdict states: “He presented himself before the tribunal and stated his defence. No mental, hearing or visual problems were noted preventing the execution of his sentence.”

As a reminder Ayşe mentions Çayan suffered his malaise in March. The screening in Batman was in May, and the handicap report is from December in the same year. “The tribunal considers Çayan was not ill at the time of the screening, using the date of the medical report as a reference. As if it were possible to obtain the report of a handicap on the day one falls ill…”

Çayan is slowly recuperating thanks to the treatment, and the affection and care of those surrounding him. But recovery is very slow. According to this doctor, his entire brain suffered damage. Some of the sequels have partially disappeared, notably as pertains to his memory. His eyes are unaffected but the brain regions relative to eyesight do not allow him to see. “At first everything was black,” says Ayşe, “now, after close to five years of treatment, he can perceive colors. But details and faces are still not there.”

Çayan’s projects are still in abeyance. He wanted to direct a documentary on Hasan Ocak*, who “disappeared” during a custody. But there is also a fiction adapted from Tohum (Seed) a novel by Muzaffer Oruçoğlu. And Ayşe Çetinbaş is the one who will complete the documentary Çayan had begun with the musical group Kardeş Türküler.

In support for his health struggle but also for justice and against censorship, we say, as do his close ones and friends, and as says Bircan Demirci whose article was a rich source for this one:

(*) Hasan Ocak: On March 12 1995, a provocative armed assault in the Gazi neighborhood led to a wave of protest that spead to other neighborhoods in Istanbul. By March 15 there were 22 dead, hundreds of wounded and arrests. Hasan Ocak, a teacher, was placed in custody in this context and “disappeared”. On March 15, his lifeless body was found in the forest of Beykoz near Istanbul. He had been strangled with a wire, his body showed traces of torture and his face had been lacerated to prevent identification. The discovery of his body launched the “Saturday Mothers” movement 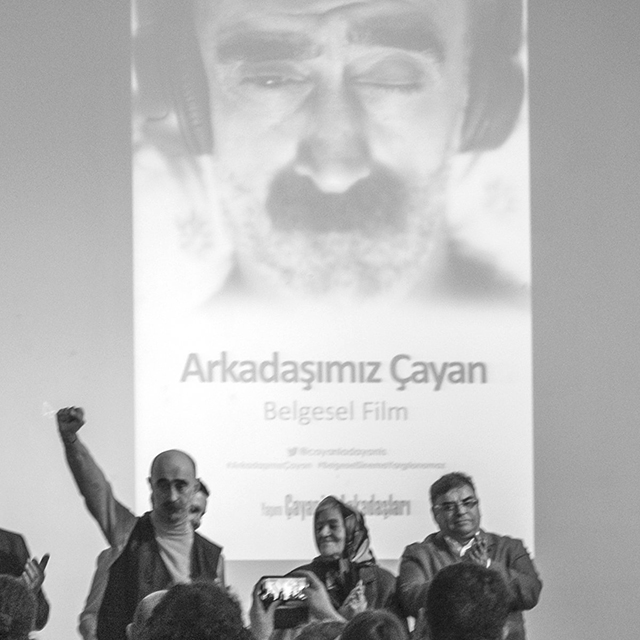