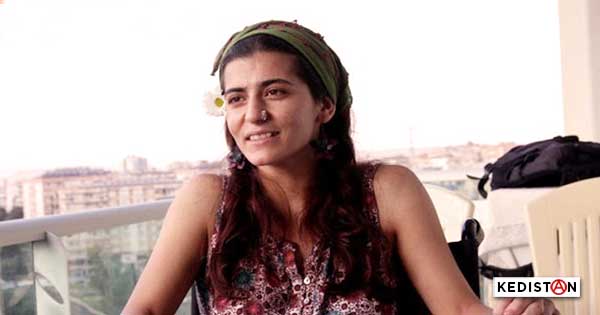 In June 2015 during an electoral meeting of the People’s Democratic Party (HDP) in Amed (Diyarbakır), Lisa Çalan, Kurdish film maker, lost both legs following a bomb attack attributed to ISIS.

Lisa fought relentlessly in order to recover her health and, thanks to her prosthetics, she stood tall again. Last March the 8th, for the World Day dedicated to women’s rights, she offered up to public opinion a moving image of strength and dignity  by filming herself dancing for women.

But the revolting and grotesque political harassment  to which Lisa is now subjected is extremely symbolic of the contempt for all opponents in Turkey, especially if they are Kurdish.

Granted through a legitimate decision awarding employment to victims of terrorism, an obligation that appears in the Law against terrorism, she worked in the cultural section of Diyarbakir’s metropolitan City Hall, as a stage designer.

According to the results of the local elections on March 31 2019, Selçuk Mızraklı and Hülya Alökmen Uyanık (HDP) were elected as co-Mayors with 62.93% of the votes. For starters, Hülya Alökmen Uyanık was denied the right to exercise her mandate. She belongs to one of the 6 Kurdish localities where the elected ones did not receive their mandate because they were fired by decree before hand as part of the purges. Then on August 19 2019, Diyarbakır’s co-Mayor Selçuk Mızraklı was removed from office. He was arrested on October 22 and thrown in jail. Yet another co-Mayor among the 24, all of them accused of belonging to a terrorist organization. After his destitution in September, the State designated an “administrator” for Diyarbakir’s City Hall…

And Lisa Çalan was fired.

In an interview conducted by Özlem Akarsu Çelik and published on Gazete Duvar, Lisa Çalan says: “I had a pretty good idea of what would happen to me. Our trial (concerning the attack in Diyarbakir) which lasted for years, finally ended last month. The three ISIS accused were sentenced to jail. The State admitted its responsibility (for the lack of security) and provided me with indemnity. Then, I was fired…

Will I never be able to leave courtrooms? For years, I ran after justice, moving back and forth between trials. And apparently, this time, I will have to go back to the courts for my right to work.

After losing my legs, I went through so many surgeries that I can no longer remember their number. I am still under treatment. I need social security for the maintenance and repair of my prosthetics and to deal with the costs of my treatment. Everyone knows that. I travel abroad regularly for adjustments to my prosthetics. I handle all those costs on my own.

I have never stopped fighting to raise myself up, to stand and face the assassins in court and demand the rendering of accounts. I will fight also against those imposing this injustice on me”.

January 8: The trustee of the municipality of Diyarbakır said :

“Çalan, administrator of the Diyarbakır metropolitan municipality has made statements about the end of her employment. Her contract has not been renewed. A disciplinary investigation had been opened against Lisa Çalan and three staff members, in the same situation, for unjustified absences. This is the only reason”