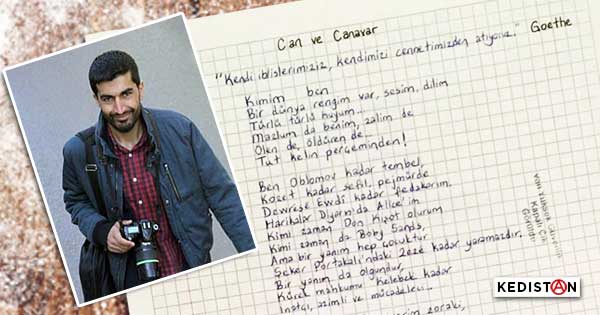 Nedim Türfent, a journalist from the Dicle (DIHA) news agency was arrested on May 13 2016 in Van. He was then sentenced by the tribunal in Hakkari to 8 years and 9 months of prison. For his activity as a journalist, he is accused of “belonging to a terrorist organization” and of “terrorist propaganda”, the two great classics of Turkish justice. His lawyers have appealed. ON last October 9, the Supreme Court upheld Nedim’s sentence, negating the words of witnesses who said “we were forced to testify against him, with a gun to our head and with teeth pulled out”…

Nedim has been in jail for more than 3 years. Several organizations, including PEN International, have denounced his condemnation and demanded his liberation. You can also bring your support by signing this petition in French, for example, or this one in English at PEN International.

In solidarity, Kedistan is publishing a French translation of a poem by Nedim Türfent we will not attempt to adapt into English.

Instead, we refer English-speaking readers to this letter published on the PEN International website:

To our friend and colleague Nedim Türfent,

As writers, journalists, publishers, artists and activists, we have denounced the continuous deterioration of freedom of expression in Turkey. For over two years, we have witnessed the Turkish authorities pursue an unprecedented crackdown against independent voices, severely restricting fundamental rights and freedoms. Although the state of emergency has now officially been lifted, Turkey remains the largest jailer of journalists in the world. Amongst those unfairly imprisoned is you, Nedim.

Today you have spent 1000 days behind bars.

1000 days trapped in a prison cell for simply being a journalist.

Prior to your arrest in May 2016, you were covering Turkish military operations in southeast Turkey. For this, you paid a heavy price. Targeted with systematic online harassment campaigns, you received death threats online and were threatened by the security services unless you left the area, yet you refused. You stayed.

Charged with terrorism offences, you were kept in solitary confinement for nearly two years, in harrowing conditions in your four-meter-long prison cell, where you were denied access to TV, radio, books and newspapers and forced to read ‘the back of detergent boxes’ to pass time.

When your trial opened, you were repeatedly denied the right to be physically present in court and instead had to testify via videoconference, experiencing severe connection and interpretation issues when you tried to give evidence in your native language of Kurmanji Kurdish. Out of 20 witnesses called to testify against you, 19 retracted their statements, saying they had been extracted under torture. Despite such clear evidence of flagrant fair-trial violations, you were sentenced to eight years and nine months in prison in December 2017.
Yet you stayed strong in the face of injustice. You took out a piece of paper, a pen, and started composing poetry.

You would keep writing.

You would not be silenced.

Today, we are writing to let you know that you are not alone. We stand alongside you and unite our voices to call for your immediate and unconditional release. We will continue to fight for the rights of journalists and writers – in Turkey and around the world – to be able to write freely, and for all those jailed for peacefully expressing their views to be free.
Hold strong, dear friend.

You can find the addresses of other prisoners HERE. 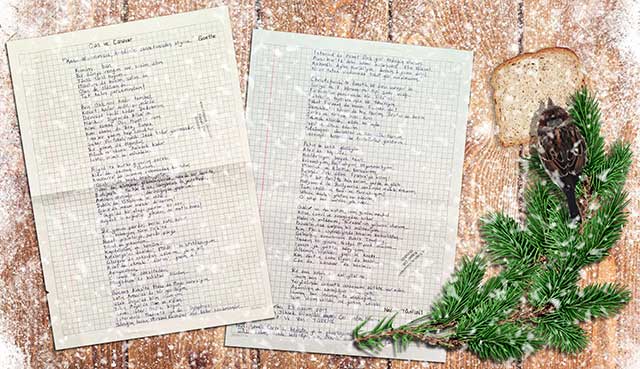