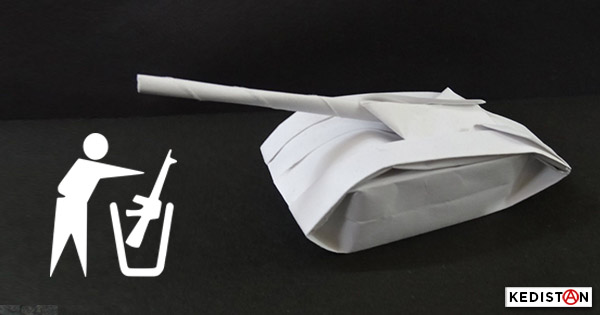 In 1989, for the first time in Turkey, Tayfun Gönül and Vedat Zencir announced their conscientious objection through a campaign conducted by Sokak Magazine. Both were charged with the offense of “alienating people from military service” is governed by the Article 318/1 of the Turkish Penal Code (TCK).

The president of Anti-War Association Osman Murat Ülke who declared their conscientious objection in 1995 was arrested on 7 November 1996 according to Article 155 of the Turkish Penal Code (TCK). Ülke was tried 8 times in a court on charges of “disobeying orders” and so, stayed 701 days in prison.

In 2006, European Court of Human Rights condemned Turkey in the case of Ülke’s trial and their punishment considering the European Convention on Human Rights (ECHR) under Article 3 of the “prohibition of torture”.

Mehmet Bal, who declared their conscientious objection on October 18, 2002 while doing military service, was imprisoned for 17 months in 2003/2004 due to same Article 155 of the Turkish Penal Code.

In 2001, Mehmet Tarhan declared their own conscientious objection. Tarhan was detained and arrested on April 8, 2005 and subjected to severe torture as a result of being both “traitor” and “rotten” homosexual.

Mehmet Tarhan was taken to the disciplinary ward called “DISKO” (disco) in Sivas Military Prison. In here, their hair were forcibly cut. They were repeatedly beaten and tried to be lynched. Tarhan tried to protect himself from these pressures by going on hunger strike.

Tarhan did not accept the “rotten report” that was asked to be given because they were gay. They refused the report by saying “I regard this report as self-rot of the military order”.

Yunus Erçep, Barış Görmez İlke, Fethi Demirtaş from the Jehovah’s Witnesses who refused be armed following the promise of the Prophet Jesus “there will be no war“ were tried in a court and stayed in military prisons.

Lawsuits that filed in 2016 against conscientious objector Ercan Jan Aktaş, Meral Geylani and Yannis Vasilis Yaylalı under the Article 301 “Crimes against the Signs of Sovereignty of the State and the Reputation of State Organs” and Article 318 “Alienating People From Military Service” are ongoing.

Especially in recent years, high fines have been imposed on conscientious objectors. Since they did not pay this money, their bank accounts were confiscated and blocked. Following this context, in 2008, the bank accounts of Yavuz Atan and in 2009 Burak Özgüner and Şendoğan Yazıcı’s accounts were blocked.

The case opened for Şendoğan Yazıcı under Article 53/1 of the Turkish Penal Code points to a new situation. Their trial for this article continues. In case of being sentenced from this article, possible results would be as in the following::

Because of these harsh conditions, in the last 3 years, dozens of conscientious objectors abandoned their cities, their lives and defected to various European countries. This heap escape continues.

Under above-stated conditions, reminding Turkey that its implementations subject conscientious objectors to severe human rights violations considering the framework of international conventions and carrying out the necessary work has become urgent.