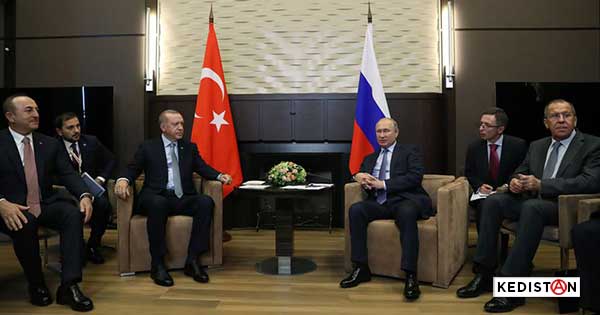 “HISTORICAL agreement!” our Reis is going overboard to pass off as a victory what is nothing but the total mess he has added on the Syrian border.

Although he was nothing but the pawn of the twitter maniac and the conquering Russian, he needed convincing to get the invasion map he was showing a while back to agree with the one that will emerge following the consensus. Especially since, if I understand correctly, Turkey’s bearded auxiliaries won’t be part of the patrols. We can trust them to torture a few civilians anyway in the prevailing chaos…

So, finally, what are those HISTORICAL achievements?

They begin with a mention of “preserving Syria’s political unity and territorial integrity.” So those who were bawling loudly “we are at home here” when speaking of Northern Syria while wearing Mustafa Kemal’s hard-bristled bonnet must be disappointed. In Putin’s eyes, the Turkish stamp on the zone is purely temporary. And if Syria’s political unity may mean that both the Kurds and the opposition that let its beard grow will have to put down their weapons for the continuation of negotiations in Astana, the local killers hired by Erdogan will have to go back to Idlib. Unless the Reis passes them off as Syrian refugees he intends to set up in camps within the zone.

For Rojava’s project, “political unity” could mean a dramatic stop, just as Turkey’s intervention put an end to peace for millions of people. Erdogan, far from finding the “source of peace” has re-awakened the monsters.

Then there’s the question of breadths and widths where only Rojava’s fighters, barely mentioned by their name, must evacuate, with or without weapons from specific localities to a depth of 32 kilometers within Syrian territory. I can imagine the confrontations, should this this mean stopping right smack in the middle of a district.

Turkish and Russian patrols will be put in place, this time to a depth of 10 km. I suppose the empty spots will be filled in by the regime’s army, since Rojava’s fighters must pull out. This will preserve the unity of the gruyere. HISTORICAL, no?

If what they mean to say is that it was historical, back in the days when I wasn’t even born, to draw with knives and rulers the frontiers of the States in that area, then it is indeed HISTORICAL. The causes for wars have been preserved.

In the short term, this means that human lives will be saved for a time. But that was not the Reis’ project since he wanted an exchange of populations.

And there is also the matter of the refugees. But what idiot will want to bring his little family into that area, leaving Turkey where he had migrated? Unless, as was done in Afrin and as was done with the properties of Armenians after the genocide, incoming people are given title to properties where this is considered advantageous. In that case, best of luck with the competition they will encounter from the few Turkmens who refused to be part of Rojava’s political process and who wear revenge like a badge of honor.

At the moment, the Syrian regime’s army is incapable of covering anything far from its base in Damascus, not to mention the varieties of bearded ones on the loose and regaining strength. The Turkish army, so dear to our local fascists, can’t do the job in the long-term either, even if it is a member of NATO.

Plus, the chaos created by the exodus away from the zones of combat, from the bombs and from the gangs will require a minimum of administration. And in order to administer this chaos, who better than those who had provided peace, because they were the ones who pushed back ISIS, as needs to be recalled all the time.

Because, when you look at it closely, everyone pretends to forget that the populations that are suffering, those that were protecting them and that are now being disarmed, are at home, on their land, and did not simply appear there one day as did the coalition, the Russians or the Turkish army.

Once again, barring a total genocide, it will have to be acknowledged some day that, even when betrayed by everyone once again, Kurds exist.

I would like to add something that is not part of the agreement. I don’t have the right? You are correct. In this morass, what is right and lawful is buried, just as the recent victims are, and the ones to come. War crimes will be kept under cover.

The use against civilians of weapons euphemistically described as “unconventional”, the use of mercenaries for assassinations, targeted or not, supposedly blind bombings that happened to hit “strategic” knots where the population was burrowed, well, “that’s war”, it’s dirty but that’s how it goes. You can’t raise “sources of peace” out of the ground without sopping up blood, yes?

For those living on these lands, for slightly conscious humans the world over also, a fresh lesson in geostrategic betrayal has just been delivered. This one will have historical consequences we can’t even begin to foresee…