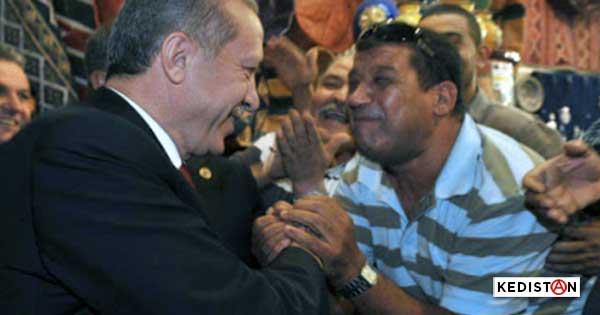 On October 8 2019, the Turkish regime launched its offensive against Northern Syria, in Erdoğan’s explanation, to re-establish peace by expelling the terrorist groups.

One week later, we see he has sent to the front lines of his attack a good part of the available “gangs” he was holding close or protecting and arming around Idleb and in Afrin for the past year. The terrorists are there, indeed. These composite groups sprang up from Jihadist anti-Bachar wings – at one time grouped under the “Free Syrian Army” umbrella, and armed by the coalition for a while in the Syrian chaos that prevailed over these past years.

Successive agreements from the so-called Astana process (Turkey-Iran-Russia) had led in 2017 to a cease-fire in the civil war and the establishment of 4 zones known as ‘security zones’ in Syria. However the Syrian regime had not ratified this agreement and re-occupied pockets, towns in corresponding zones, with Russian support and cooperation.

From one agreement to another, armed groups in these zones were transferred, along with the populations who agreed to move on to Idleb which also shares a regional border with Turkey, on the Antioch side. Turkey was then asked by Russia to tidy things up among the “gangs” radiating out from Idleb, the control for which had been assigned to Turkey.

The puppet government of the “Syrian opposition”, rooted in Gaziantep in Southern Turkey, is supposed to supervise… something, and manage the pocket of Idleb, still targeted by the regime. It is a known fact that gangs thrive there. When Erdogan now describes as non-Jihadists the armed back)up troops for the Turkish invasion known in his parlance as the “Syrian National Army”, he is pulling a fast one on the Astana agreements by recycling killers and adding to them Turkmen members with accounts to settle with the Kurdish movement. All are fighting for money, revenge and a patriarchal islamist ideology. And they are charged with the dirty work of terrorizing the populations, and committing targeted actions that amount to as many crimes of war. The members of these gangs are thus the ones who assassinated civilians at the onset of the offensive, among them a specially targeted Kurdish woman, member of the Democratic Council, Havrin Khalaf. As these groups often film their exactions or movements, some can be identified.

Legal authorities at the UN have declared that Turkey could be held responsible for these war crimes. To these should be added an attack against civilians in Serê Kaniyê (Ras al-Ayn on the maps), now completely documented by videos from all sources, an attack that caused 75 dead and wounded, journalists among them.

In this phase then, invading Turkish forces have mostly made use of the possibility offered by an open air space, although this space is dependent on Russia and the coalition, as a frontier artillery post for indiscriminate bombing. The Serê Kaniyê sector, an important penetration node, has been subjected to incessant pounding, while ground forces have attempted to infiltrate it. It is currently the theater of very strong resistance and fighting, the FDS having chose it as a fixation point, no matter what the agreement may be with the regime concerning the deployment of Bachar’s troops.

As I indicated in the first article, each of the international or regional powers is now showing its hand.

Since then, the United States have withdrawn their contingents from the war zones, bringing along in their luggage the few remaining French troops, heading for Irak and what comes next. Manbij was occupied by what is known as the legal Syrian army, and small Russian patrols insure that Bachar and Erdoğan’s troops do not come into contact, as they say in the military. So far, there have been only a few “blunders”. Of note on October 16th, a front guard of regime troops entered Kobanê, the town symbolic for its resistance against ISIS, giving a fresh impetus to Rojava’s democratic and communalist political project.

However, it appears that both the United States and Russia, – after both seeming to take a laisser faire approach, are now changing their positions and, in the case of Russia, assuming a rather conquering attitude. Sooner than expected, the latter facilitated occupation of the zones by the regime’s army, and is currently condemning Erdoğan. A Putin-Erdogan meeting should occur shortly, while Trump sends his emissaries, puts a freeze on Turkish assets, announces economic sanctions, all on the background of rounds of Security Council meetings at the UN, out of which nothing emerges.

In order to understand what is happening inside Turkey, it is important to rid one’s self of the vision of a binary opposition – “secular progressists vs obscurantism” – so dear to orientalists. Constantly repeating this stupidity on television may give the appearance that one is a specialist and it so happens to flatter anti-Muslim public opinion, while doing nothing but adding to the confusion.

Turkey’s political axis, the one that structures its public opinion, its political struggle and eventual views for the future is that of nationalism, either ultra, islamist or republican, and the ideology of turkicity that serves as the narrative for the national story, against anti-nationalism and the democratic reality that would take into account the mosaic of peoples that make up the country. In short, the different European leftist currents must consider a heartbreaking revision and a necessary distancing from the Turkish Kemalist historical novel.

It then becomes easy to understand why the majority opposition, ultra-nationalists and Erdoğan are joined up together under the invader’s uniform. In even clearer terms, Istanbul’s dashing new mayor, Erdoğan’s conqueror, the one supposedly representing the future, has aligned himself and his party behind the killers I mentioned above. How progressive, no? All those under the blood red crescent banner, from nationalist grey wolves to bigots, praise the offensive, even in schoolyards, with a stream of supportive prayers.

Only the HDP partisans – which are far from all being Kurdish – might oppose this war, along with a few academics, artists and human rights activists. Hardly had they begun to express themselves, whether in Istanbul or in Diyarbakir these past few days, that the repression and arrests began.

The Turkish regime is making total use internally of this fight against the so-called external terrorism. This is a common caracteristic to all identitarian populisms. Therefore, the regime continues its purges against Kurdish mayors, for example, places opponents in custody through a prohibition on criticism of the ongoing war; such criticism being considered as support for the designated terrorists, which is to say the democratic political project of the Kurdish movement in Rojava, and by rebound, the HDP in Turkey. Here again, all the other political components agree, of course, including a certain mayor in Istanbul, elected thanks to the Kurdish voices that made the difference.

Relaxing vigilance and support for the true opponents in Turkey would mean a lack of understanding of what is truly being played out and, inversely, in speaking for Rojava, only mentioning ongoing combats along with the horrors or exactions, without mentioning the ongoing political setback, would also be making the same mistake.

What is currently taking place during this historical moment, was summarized for me in a recent comment on Kedistan, in the expression 1936 Spanish war – 2019 Rojava. For the history of emancipation struggles, this is a bloodcurdling shortcut, one that foreshadows somber days.