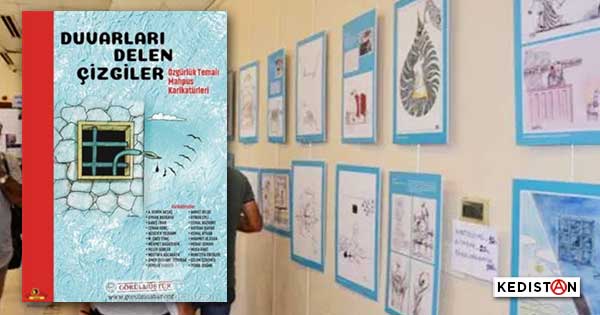 Despite everything, a book of satirical cartoons titled “Duvarları Delen Çizgiler” (Lines that pierce through the walls) has been published in Turkey, to accompany a travelling exhibition.

The exhibition “Duvarları Delen Çizgiler” is presently in Istanbul. It could be seen on October 12 and 13 in the meeting place of the association Divriği Kültür Derneği, in the Beyoğlu neighborhood. Both the project of the exhibition and of the book are the initiative of Görülmüştür.org, a collective and website that collects addresses of political prisoners in Turkey. 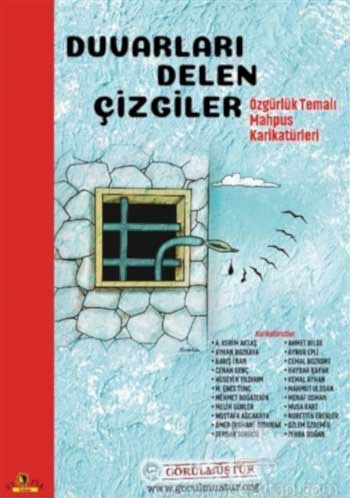 And of course, all the drawings bear the famous stamp from the “censorship commissions” found in all the prisons. “Görülmüştür” (“seen” in Turkish).

Adil Okay from the Görülmüstür team who sent the book to several prisoners in different prisons, tells in an interview on Duvar how the book and exhibition came to be. He denounces also how this book – although it is absolutely not listed on the “forbidden books list”, is censored and its entry is forbidden in the jails.

“For years now we have conducted collective projects with prisoners and organized exhibitions. This year, we wanted to bring the prisoners’ dreams of freedom outside, thanks to their own pencil strokes.

I attempted to contact close to 50 prisoners by visiting dozens of prisons. I sent over one hundred recommended letters and faxes (normally the administrations have to obligation of turning over the faxes to the prisoners). The letters were lost, or were not given to the persons they were addressed to, with the excuse of frequent “correspondence prohibitions” instituted as disciplinary sanction.s Other letters were returned ‘not at this address” since forced transfers from one prison to another are also frequent.

After persisting for 7 months, we collected 70 original satirical cartoons on the theme of “freedom”. We put together the exhibition, containing the works of 22 artists, with the support of the collective Homur Mizah Grubu. And the exhibition has travelled to several towns. Then, we published a book with the publisher Ütopya Yayınları.

Of course, the first to whom we sent the book were its contributors in jail. While the book penetrated in some ten prisons without any problems, some prisons have begun forbiding its access. One, then two, then the refusals increased…” 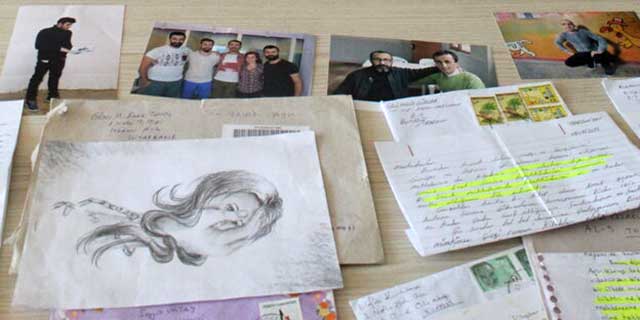 “Seyit Oktay, a writer incarcerated in a Type T prison in Tokat, talks about it in a letter he sent us,” says Adil Okay: “The fact the book would not be given to me was verbalized in the decision of prohibition by the Education Council attached to the Administration of Type T prisons in Tokat. So I wasn’t able to say that this was maybe a joke…They had taken this decision because ‘the book contains drawings and texts that may imperil the establishment’s security’. Barely a month ago, a new pack of laws supposedly ‘widening the field of freedom of expression” were announced in flamboyant press articles. (…) Unfortunately the drawings done in prison, and that could escape it, once transformed into a book, could not make their way back through the walls of our prison again.”

Adil Okay continues: “I would like to add the following… As you know, following the coup on September 12 1980, prisons in Turkey were transformed from “centers for the rehabilitation of detainees” into laboratories for the loss of identity. Even if there have been breathers following struggles, it is still the kingdom of the arbitrary. We know this arbitrariness well, through practices and decisions that are not only illegal but often devoid of all conscience on the part of prison directors, guards and education commissions. The information and the complaints we received concerning baseless practices of a totally arbitrary nature, the prohibition of books, newspapers, correspondence, forced strip searches, military-style roll calls, medical examinations while handcuffed, and even childbirths while handcuffed, torture and forced transfers…”

The law concerning books in prison is crystal clear: “Entry into the establishment is authorized by the administration for printed editions that will be put into the library, or if brought by the prisoners or sent from the exterior, conditional on their entry and distribution on the campuses not being forbidden by a court decision. (3/2/1994-94/5382K)” In short, any prohitibion decided by the administration, if not based on a decision of justice, is arbitrary and illegal.

Adil Okay said: “In the latest news, at Diyarbakir prison, the book was also refused to Mr. Enes Tunç who work appears in it. He then filed a request by legal means. The judge refused his request. He turned to the Penal Court and says he will go all the way to the Constitutional Tribunal… The prisoners are fighting for our rights as well as for their own. They must fight, even to read a book.”

Adil specifies that article 64 of the Constitution states that the State provides support to artists and artistic activities. “This is what the Constitution says but when the artists are considered ‘opponents”, the laws no longer apply. And despite all the laws, legal book become illegal in jail. We mustn’t abandon the prisoners to their struggle. Supporting them in their efforts to read is also a duty for poets, authors and journalists…”

Adil Okay closes with a message for the Turkish Minister of Justice, “If these laws exist then undo these contradictory practices and bring proceedings against arbitrary censors. Otherwise, one way or another, we will make our way through the prohibitions, just as these artists pierced the prison walls with their pencils.”

Lead Photo: One of the previous exhibitions in Adana.