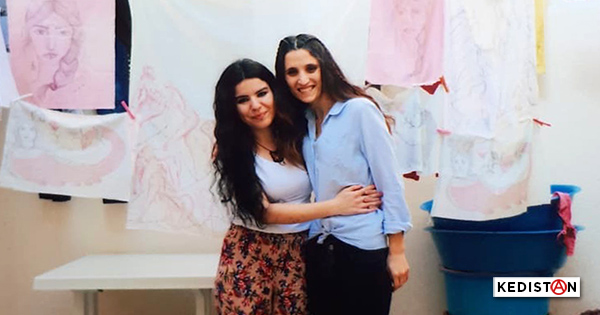 Talking for the outside about my imprisoned journalist friends

Today, May 3rd, is “World Freedom of the Press Day”. I think we can best write about such a day in such a country. In a country where over one hundred journalists are in jail and which holds high the flame of the top rank in the imprisonment of journalists, and where it is still as precious to let the ink flow, stubbornly, in the name of freedom. Who knows, perhaps this contradiction gives even more meaning to this day for us. On this specific day, as a recently released journalist who still hasn’t realized what it means to be outside, I can do nothing other than to talk to you about my journalist friends who are still in jail.

The fact of speaking from the outside about friends with whom I was still living a short while ago, produces a strange sensation. On the day of my liberation, as they led me to the great iron door, I understood that I would never be truly free. Once I had crossed the threshold, as the door closed on them, our eyes touched a last time for a second. In one instant by the virtue of a few centimeters difference, our positions had changed. I was free and, behind me, they remained prisoners. But was this the truth? In leaving the prison, I left a part of myself there, and I had taken a part of each of them into my heart. Thus, neither was I totally free, nor were they totally prisoners.

Now, with your permission, I will tell you about those journalists among all the women who are now a part of me.

Type E prison in Diyarbakır. Two year ago. It was winter. First, Leyla Güven who was then the co-president of the DTK joined us. She told us “Özlem is in custdry, they will soon bring her here also.”But days went by and Özlem didn’t come. We thought she might have been liberated. Our optimism could kill us. Despite the fact that we live the worst every moment, with stubborn optimism, we go on thinking on the best of things. Sometimes this excessive positive spirit in women drives me crazy. But is it necessary? Yes, quite obviously.

Days later, suddenly in the night, the scary creaking of the door split our ears. The shrill voice of the guard resonated against the walls: “Laaadies, I’ve grought you a new frieeeeennnd!” As if she might expect a reward for bringing such good news. That’s how outrageous she was… Özlem is the one who entered. They had held her in custody for days. Even we had forgotten Özlem. She didn’t get to eat much during her custody. Her long slim body had melted away even more.

Özlem is a journalist from whom I learned many things on the outside. She worked a lot during the years where JINHA was getting established. She took care of each and every correspondent, and worked with them, one by one. As JINHA was a brand new agency, there was much to be done. All its belongings consisted of a few tables and chairs. And since we had gathered this material from different institutions, nothing matched. Our agency was filled with colors. So much so that the articles about JINHA said “the decor matches women’s lifestyles, in every color”. Even if the reality was quite different, our agency with its recycled decor was a good match for our editorial line. During that time, Özlem brought thing to the agency, to the point of emptying the production firm where she worked. Thus our women’s agency became even more colorful.

Özlem quickly brought her extremely dynamic and amusing life into our interior. Because of her energetic manner and clear eyes, our friends called her the “mountain goat”. The nickname stuck. None of us wanted to believe Özlem would be sentenced and we hoped she would be quickly liberated. But she was sentenced to 9 years and 8 months in jail for “belonging to an illegal organization”. She is presently incarcerated in the Type E prison in Diyarbakir. Who can confirm Özlem’s true status as a journalist? The government and its Justice that claim the opposite or us, her journalist friends who worked with her for years and who learned so much from her? But in jail, Özlem always said the following: “If there is something you want to express, it will always find some way to be understood and to find its proper place.”Yes, perhaps there are people today who do not want to know what she is expressing, but as she says, some day the fact she is a journalist will be understood and what she wants to say will finds its proper place.

With Kibriye at the agency, we went through a number of difficulties and problems together. At first Kibriye worked at JINHA. Then when JINHA was closed down by decree, she started working at SUJIN right from its inception. She did not count her days or her nights while working for SUJIN. “A large needle to stick in men’s macho language!” Such was the agency’s slogan. This is probably why the brains of the men whose tongues were bleeding from the pain also closed down SUJIN by decree. With her colleagues, Kibriye then founded JINNEWS. Shortly thereafter, on October 9 2018, she was arrested.

Kibriye joined us in jail awith dozens of other women. Our small quarters turned into a big circus. Section C-4 where I was had been built for 20 people, it was now filled with 41 women. As for section C-3 where Kibriye was detained, 25 women were crammed into it.

We talked with Kibriye from the foot of the wall, from one window to the other, without being able to see one another. She told me about JINNEWS. How many women had joined us, how things had changed in the past two year, the events the agency had experienced…She told everything through the window, without seeing one another, speaking while facing a cracked wall festooned with barbed wire. Our conversations rolled on with the spirit of gossiping at a party, as if we were not imprisoned, as if we lived on the same street. Yet, Kibriye and other friends had been through quite a bit of problems during their custody. Their door was broken down, they were subjected to strip searches and insults every day.

Shortly thereafter, I was transfered against my will with 19 other friends, to the prison in Tarsus. Kibriye was among those staying in Diyarbakir. We left this jail at five AM with tears in our eyes. A few days later, we heard in Tarsus prison that Leyla Güven had begun a hunger strike. A month and a half later, Kibriye joined the strike. She has been on hunger strike since December 16 2018. She is vomiting blood. Her health is critical. She suffers from intestinal problems, headaches, nausea, rising and falling blood pressure. Her weakened state and muscular pains make walking difficult. She is no longer allowed to see her lawyers or to receive visits from her relatives.

I met up with Dılbirin during our conversation in Tarsus prison, by communicating through the sewer hatch. We were in different sections at that time. Prior to my liberation I changed sections in order to spend some time also with these friends. As Dılbirin and I were both from Mardin, we talked at length about Mardin “a feast by day, a fine scenery by night“. We promised one another “Some day, whatever the cost, we will go to the fortress in Mardin and drink contraband tea by nightfall.”

Dılbirin worked for the Kurdish service at JINHA. She wrote several articles about the region in Kurdish for JINHA. At the same time, Dılbirin was the muhtar(official) for her village. This is why they targetted her. They sentenced her, saying “In your village, you support and help an illegal organization.” She has been incarcerated for two years and a half.

Dılbirin is also on hunger strike since January 5 2019. She suffers from extreme weight loss and muscular weakness. Moreoever, she suffers from hepatitis B. At her sister’s last visit, Dılbirin sent us a message: “I would like to take part in the future peace. Upcoming difficulties do not frighten me. If isolation ceases, that will be good enough for me.”

We worked with Meltem for several months in Nusaybin. Of the two, the hardest working was Meltem. She was much loved by the residents. Where there was an information to be relayed, Meltem was on the spot. She was extremely quick. She would sweat so that an information went through her agency and she always managed to transmit her information in the best fashion and the shortest delays. In Nusaybin where there was no power for months, she didn’t leave the side of the generator, she wrote her articles, did her editing for hours, despite the freezing cold. I learned many things from her and from her kindness.

Meltem was accused of “propaganda”, the information she provided was entered as proof, and she was sentenced to 2 years and 4 months in jail. She is currently incarcerated at the women’s prison in Gebze.

The life of each woman is a tale, each one is beautiful. Writing them down today reminds us once again, that the press is not free. Our wish is for freedom through the world and that there no longer be the need of a day dedicated to “World Freedom of the Press”.

Note from Kedistan: You can support these women by sending them cards and letters.
You will find the list of addresses HERE.