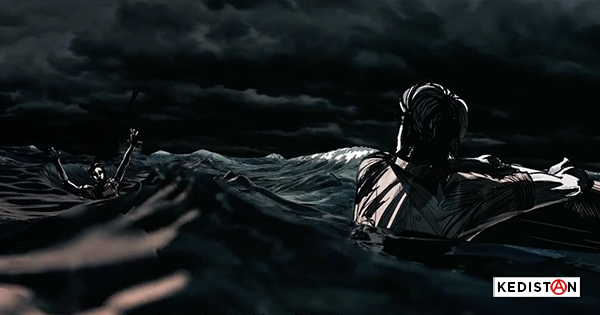 Last February, Behrouz Boochani received the Victoria Prize, the richest Australian literary prize for “No friends but the mountain”.

While waiting to discover his book, here is a short animated film by Lukas Schrank relating the horrible daily life to which are subjected the refugees detained on the island of Manus.

Shown at the 2016 festival in Douarnenez, this animated documentary has found a place on bed.bzh next to other gems putting the awful into drawing, such as the fine “Migration” by Sylvaine Jenny, of which we spoke here before.

Behrouz Boochani is an Iranian Kurd. He is a journalist, he believes in freedom, human rights, democracy. In order to avoid prison, he flees his country and takes the road to exile toward Australia.  A long road, exhausting and dangerous, which Behrouz relates in a dreary voice: I had nothing left to lose. The images stream by on the screen: the streets of Djakarta, the jail, misery, the travelling companions, the crossing. The drawing is dark, reserved. The voices of the witnesses and the sputtering of the phone are enough to tell the rest.

Australia outsources the control of its frontiers and its migratory policy. It spends close to a billion dollars to build retention camps in Papua New Guinea, where the exiled are parked in miserable camps, on the margins of the world, far from the eyes of media and international attention.

When Behrouz is arrested, after the shipwreck of the boat in which he was attempting the crossing, he is confined on the island of Manus, a tiny confetti on the Equator in the Indian Ocean. In Papuan territory.  He fled Iran in search of freedom. Here, he is innocent and held in detention. His voice and Omar’s continue the tale, and animated images take over for what cannot be filmed. The heat, the waiting, the barbed wires, the visit from Australian authorities, the relations with the island’s inhabitants, sickness, distress, despair. And that terrible night where the guards desert, abandoning the camp and its prisoners to the anger of the locals who do not want them on their lands. The voices make way to drawing and silence makes way to  violence. Blows,  insults, fear, death. Prayers. Even if “those things don’t work on Manus Island.”

A violent testimonial on an outsourced retention camp, financed by a country refusing to welcome men and women in flight. At the other end of the world, parallels with Europe and Turkey are many.

Behrouz Boochari writes from the camp on Manus. He provides regular testimony on the conditions of detention, criticizes Australia’s offshore detention system. He is published in The Guardian, becomes a recognized voice in the country that does not want him. Behrouz Boochani is a journalist in jail. Like so many others locked away, he continues to practice his trade.

His book, written on Whatsapp, comes to life thanks to a chain of solidarity: he sends regular messages to a friend who compiles them and sends them to a translator. A technique devised in order to get the message out of the camp, avoiding censorhip and searches: “I was afrait to lose my writing. So it was best if I wrote and sent it out immediately”

Behrouz could not go to Australia in order to receive his prize, but he transmitted the following message:

“In a way, I am very happy because we can bring attention to a difficult situation and you know many people have become aware of this situation, which is great. But on the other hand, I feel I have no right to celebrate – because I have many friends here  who are suffering. The first thing that needs to be done for us is to give us our freedom to leave this island and begin a new life.”

Another refugee detained in Manu, Abdul Aziz Muhamat has also received a prize, the Martin Ennais, awarded by human rights associations. “We needsecurity, we need freedom, we need hope. Opposing this cruel system helps me  keep my self-respect and my human dignity. I will continue fighting until all of us are safe and free.”

Among the finalists at his side, Eren Keskin.

Yes, of course, I cannot help but think of journalists in Turkey. Of Zehra Doğan and her co-detainees. To the testimonies exfiltrated from jail. To the drawings that show the unspeakable. To the poems born from barbed wires.

In order to explore further and a bit further away: the colum Papuan People and the selection of documentaries devoted to Aboriginals, freely accessible on bed.bzh.

But also documentaries on migrations and Kurdish films, relayed every month on Kedistan. 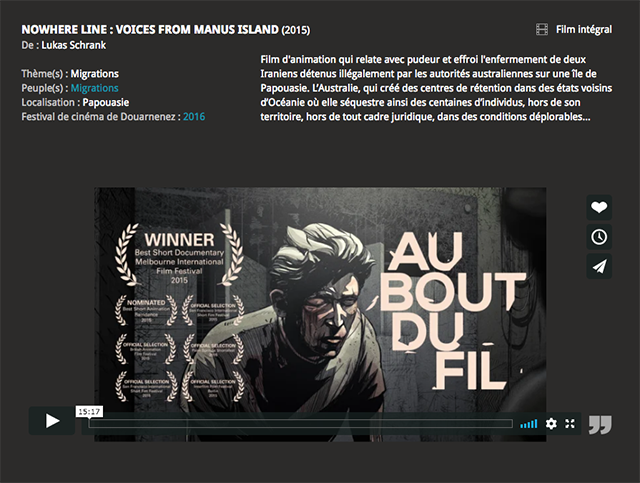