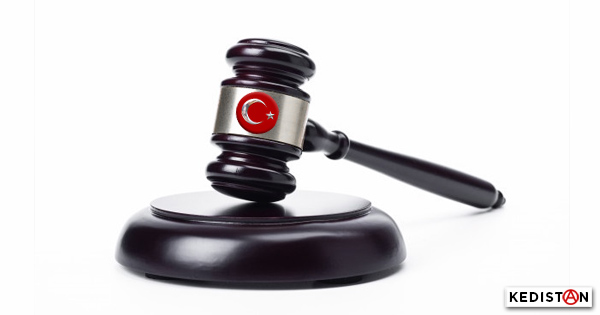 The Ankara trial is a textbook case for anyone wishing to understand both the unending tracking down by the State of the insubmissive ones and the manner in which injustice is secured by the succeeding powers.

We did not talk about this judgement in the heat of the moment, but the appeals should keep it topical for a long time, as with other political trials that transform Turkey into a permanent Court against all protests.

The so-called “Ankara trial” was conducted in Ankara’s Penal Tribunal N°9 last March 15th. Nineteen academics, teachers, researchers, doctoral and licence students who had signed the Call for Peace in January 2015 were tried under the traditional charges in such cases such as “membership in an illegal organization”, “propaganda for an illegal organization”, “damage to public property”, “refusal to obey a State employee”, but also extremely targeted accusations such as “belonging to the Federation of Democratic Rights”, “responsible for the organization of the symposium of local popular and revolutionary administrations”, or participation in demonstrations organized by unions and corporatist organizations such as KESK, DISK, TMMOB, TTB, all of them, need we mention, legal entities.

Sixteen academics were sentenced to jail terms of 6 years and 3 months for “membership in an illegal organization”; eighteen persons were also sentenced to 10 months in prison for “propaganda”.

The “condemned” remain free until their sentences are confirmed since their lawyers have appealed. Of their number, only Ali Haydar Yıldız was arrested and incarcerated, for representing a “risk of taking flight”…

Around 2011, the Federation of Democratic Peoples (Demokratik Haklar Federasyonu – DHF) and its various elements became the target of “Cemaat”, the movement developed by the preacher Fetullah Gülen. Because the DHF organized initiatives that were reported in the mainstream media, and this proved bothersome to Cemaat. A few examples: The Symposium of local popular and revolutionary administrations inviting the public to intellectual questioning, at which one of the participants was Hrant Dink, a Turkish Armenian journalist who was murdered later…and particularly the campaigns the DHF conducted against the Gulenist movement in Dersim (Tunceli).

In 2011, the magazine Aksiyon, one of the press ventures of the Gulenist movement, published articles against the DHF and its campaign. For example, an article under the title “In Tunceli, a rehearsal for a terrorist organization”analyzes the event and reaches the following conclusion: “there is an insufficiency on the part of State bodies in the fight against anti-Gülenist campaigns.” Following this article, members of the DHF were arrested and kept in custody in Dersim, and a short time later, in 2012, some hundred members of the DHF were also arrested during police operations throughout the country. Some 40 of them were then incarcerated.

The hunter hunted down with his own methods

The arrests, the investigations and the accusation files for the trial were concocted by policemen and lawyers close to and members of the Gülenist movement…

At the time of the opening of the trial in Ankara, members of the Gülenist movement were well ensconced at all levels of the State, and particularly in the workings of security and justice. For their leader, Fetullah Gülen was still Erdoğan’s travelling companion. This continued for a while still until Erdoğan, wishing to eat his cake by himself, decided to declare that Gülen was his Enemy N° 1. Never mind the fact he was still an elected representative, among other things, and, with the help of his influential friend, a seductive element for an important segment of the electorate…

A near majority of the judges, prosecutors and policemen who remanded, led the investigations, instructed the prosecutions, and prepared the files for the “Ankara trial” were fired, and judged, during the purges that followed.

The hunter was hunted down, using his own methods. This time, it was their turn to be accused and condemned on the basis of absurd falsified documents. A form, filled out and signed by an anonymous hand, bearing the name of an accused, could be considered as proof of his membership in an illegal organization, for example. Of course, everyone knows any self-respecting illegal organization provides documents in due form one must fill out in order to become an official member… Although criminal expertise established that these documents  were  false, these persons did not escape sentencing.

But the trial of the academics goes on…

Despite these facts, and the arrests of the judges and the prosecutors, the Ankara trial pursues its course. And last March 15th, the academics were condemned…

Murat Yilmaz, lawyer from CHD (Association of contemporary lawyers), defending the academics in Ankara declared: “The State’s methods do not change. When dealing with opponents, progressists, or Kurds, the fact their files were prepared by persons since condemned as belonging to an organization also condemned, has no bearing on the case…Using these illegal elements of “proof”, the opponents are condemned and neutralized. As a consequence, once again the opponents are the injured party in the confrontation with the dominant powers against them.”

Ahmet Kerim, ethnologist, fired by decree from his university position like the other academics who signed the Call for Peace, reacted on his Twitter account after the sentencing: “Thus, it stands at 8 years and a half of jail time, the price of participation in a May 1st demonstration, in strikes and boycotts, the fact of speaking at round tables and symposia, of fighting for popular and revolutionary municipalism, and of bringing anthropology to the streets…The world will have ended that we will still be singing the same song. May you drown in your own persecutions.”

Sinem Mut of Ankara University underlined the fact that the powers at AKP did not care who had prepared the accusations and conducted the trial, but only cared about those that would be sentenced. “The policeman conducting the search in my home in 2012 had said: “You read a lot, you conduct a lot of research but…” Today I would like to complete his sentence. “I overcame dozens of problems, I obtained the right to be a researcher. Since my incarceration, I have not ceased reading and researching, and I continue to produce as much as I can. I loved my work, and my objective was to follow the path of science and reason, to learn, and if allowed, to transmit. My aim was to teach and to advanced with the younger generations, not as bigots, but as people following the path of light, science and democracy. Let us meet again then, in brighter days.”

Zelal Karataş, studying for a licence at the  Social Science Institute of the Mimar Sinan Fine Arts University: “During this trial where we are judged for membership in a terrorist organization, the totality of the accusations concern our rights as citizens, rights protected by the Constitution. There is no question of offences or crimes. Participation in the May 1st demonstration and that of March 8th, presence at meetings organized by unions, membership in a legal association, organization of an initiative such as a symposium, etc…This decision demonstrates that all those who will dare have the courage to resist will be labelled “terrorists” and criminalized. We will use all our legal means of recourse.”

Cem Kaan Gürbüz, studying for a licence in the Social Sciences faculty at the University of the Middle East summarized the essentials about this trial with these words:

“The police, the judges and prosecutors start a trial for “membership in an illegal organization.” They are then fired themselves for “membership in an illegal organization”. The judges and prosecutors from the AKP finish what their jailed predecessors began. In fact, for decades, like an unchanging State policy, what is on trial is the struggle for democratic rights. No matter which set is strongest within the State, it uses constraint in order to insure the State’s perpetuity. Despite everything, we strive to maintain hope and resistance. The wind will turn.”

It may be useful to briefly summarize the active collaboration between Fetullah Gülen and Erdoğan up until the years 2013/14 when differences arose between them on matters of sharing and their appreciations on corruption. Tensions were such at the time that, after Erdoğan expressed the wish for a reduction in Fetullah Gülen’s growing influence  (via his foundations and his schools Gülen had introduced his protégés within the State apparatus and the army. Having done so, he launched through his judges and prosecutors a cleaning operation that destabilized the AKP. Other grievances were also in the balance, such as the financial windfall from Gülen’s foundations and schools worldwide.) We should also remember that, despite the fact Gülenist military officers formed the majority of the cadres at the siege and massacres of populations in the Eastern Kurdish quarters in 2015, Erdoğan had then threatened to “deeply restructure the office of the Chief of Staff”, as an expression of “gratitude”. This was one of the aspects that led to the failed coup in 2016.

Briefly stated, some of Erdoğan’s current worst enemies were once his best friends in ascending to power and consolidating his hold on it. No surprise then, if the ones who have always resisted the notion of Turcity, the cause of all the wars and division, should be the adversaries of both, as demonstrated by the continuity of the injustice ongoing in this trial.

But there is something comical in the fact, now that the wind has turned, in the fact the historical enemy risks finding himself side by side in jail with the one who prosecuted him and put him there. This is also what is happening in exile, since a number of Gülenists are tracked down outside Turkey, as are leftists opponents and Kurdish militants.

The second lesson being precisely that of the continuity in the State powers and their repressive machinery, no matter what the purges and regime changes may be. The Republic of Turkey has a fundamental core, and the repressed genocide that served as its quasi foundational act is still closely guarded by those serving the State – and making use of it for their own interests while they’re at it. Thus this trial demonstrates a remarkable continuity of the State throughout its modifications.

And that the State’s opponents should precisely be academics for Peace, necessarily raises questions about the nature of the State conducting a war against them.