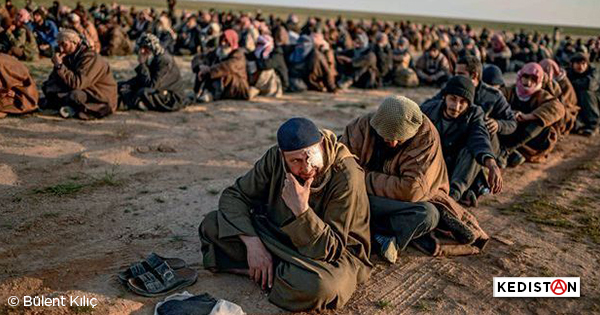 The proposal made to the international community by the Kurds of Syria to judge ISIS criminals in front of a special Tribunal where they committed their crimes, is not an idle statement among others, but a call to action.

This proposal made by the forces who made the decisive contributions to  end the military existence of the Islamic State – the FDS, to call them by their name – has raised numerous debates and declarations and produced several press articles. Heads of States found themselves forced to take an initial stand publicly.

Following the non-answers by those States directly concerned by the repatriation of arrested Jihadist combatants, this proposal now reveals everyone’s embarrassment.

The first demand from the frontline fighters against ISIS and the structures of the democratic federation of Northern Syria, who despite being officially unrecognized have served as de facto interlocutors with the “coalition” went unanswered. It consisted of a demand that the nationals from foreign countries who had joined the Islamic State be taken in charge by their country of origin. This common sense approach signalled the need for essential discussions, and responses other than quibbling and haggling over the children.

Given the problematic survival of local populations in an ongoing state of war, they can no longer be expected to bear the weight of the prisoners from ISIS, and of responsibilities that go well beyond that of concerns for the children. The threats still issuing from the Turkish regime to cross the border in order to “annihilate” the YPG increase the urgency of an adequate response.

And yet, what prevails as a matter of international policy is a big “to each his own shit”.

International emergency measures include makeshift, high risk accommodations for refugees in overpopulated camps, jam-packed Kurdish jails, temporary confinements, with each “service” identifying its nationals and tallying the dead. In the absence of a true deployment and real coordination, the risk is great that criminals will escape, and probably not the least among them. We can be sure that this so-called high security policy of refusing “homecomers”, held in high regard by Europe for example, will reinforce ISIS in the short term. For the time being, it also comforts those in favor of security measures and a xenophobic ingathering on the European continent.

The war”coalition” in Syria was always circumstancial. It was constantly of variable geometry, variable policies, variable logistics, with no future objectives for the region other than the interests of one or the other. Faced with this latest obstacle, all of them grumble. There’s nothing new in this attitude.

This is why, despite a number of valid legal arguments against it, the proposal of a dedicated Tribunal is probably the smartest, politically speaking.

But the intelligence of a proposal in no way guarantees it will be retained or even given due consideration. In this case, it may not prove legally acceptable given the current state of international relations.

True, coming together in order to decide on a kind of Nuremberg for the war in Syria and Irak is a gamble. It would call for a doubling of all the negotiation tables in Geneva. Reaching an agreement on its implementation and the considerations to be examined would already cover more than half the ground toward the bases for a future peace negotiation guaranteed by the United Nations. We may as well move to dreamland…The recent “summits” were Russian, Iranian and Turkish, with Trump’s support, and gave rise to threats more than to peace proposals.

Reducing the perimeter of the crimes to those committed by ISIS, with all the qualifications one could add to them including that of genocide, would still be an insult to history.

And why couldn’t this Tribunal come to be?

Even if its role is first and foremost that of passing judgment on criminals, an international tribunal gives a de factolegal basis to official history.

One cannot claim that, so far, be it for Ex-Yugoslavia, or in the case of Rwanda and the global action of the TPI in the Hague, the results have been convincing, independent and free of political compromises; in fact they have proven falsified in some instances. In this context, historians are still free to build whatever acceptable narratives they choose. For the victims and survivors of the genocide in Rwanda, local resilience proved more powerful and operational than the decisions reached by international justice, no matter how necessary were the latter. For ex-Yugoslavia, few people remember the extreme difficulty in setting up and financing the Tribunal, and the political hurdles raised in Europe. Judgment was rendered since, but other than the genocidal horror, nothing was laid bare of the political responsabilities and their ongoing consequences. Novels around ex-Yugoslavia, be they right-wing or left-wing inspired, are free to proliferate at will.

In most cases obviously, the “justice of men”, even when inspired by the best of intentions, rests on the relative power of the protagonists, political contexts and a wish to bury deep in the unconscious of history the collective responsibility for the crimes committed. However, this does not mean such justice must be botched or partial.

In this occurrence, Trump’s current negative answer at least has the merit of clarity. It rests on both feet. To summarize, the first foot is purely financial and logistical as such a tribunal would slow down the disengagement of his troops, the second foot aims at keeping the lid on the ghosts of the intervention in Irak.

As has become its custom in the past few decades, France is being “reserved”. The humorous sketch by Coluche to this effect notwithstanding, it is not difficult to understand that this tribunal would require some clarification in the recurrent French political convolutions around the question of Bachar, for example. Moreover, the French President is in need of serenity with his security-conscious and xenophobic right wingers, and afflicted with a lingering “jaundice”, as we know.

Hence, the Europe of sovereign nations agrees on one thing “to each his own shit”and weapons will go on finding buyers.

One of the slogans of yesteryear used to say “your wars, our dead“. It was not chanted by bleating pacifists and was even picked up by the internationalist fighters who joined up with the Kurdish forces, since they considered it could justifiably be spoken in this context. These fighters knew which coalition was theirs, in opposition to the imperialistic policies in the region, and they knew for what kind of future they were fighting. They paid a tribute to war. Now, they are made to see how the processes underway in Rojava are threatened more than ever by an international ark of influences keen on keeping the braises alive for their own benefit.

These political and/or military pressures are doubled with a growing and averred precariousness in Northern Syria, as a consequence of the blockades, the war, and even climactic conditions. Hiding one’s head in the sand and replacing the question of necessary support for the future of the democratic process with simple-minded, blindfolded propaganda in the context of a forced negotiation with the Syrian regime as a consequence of the Turkish threat is unacceptable.

Any political project must be defended with eyes wide open, no?

Contrary to “war endings” where the identified enemy is vanquished, on its knees and bled dry, the situation in the Middle East remains one from which is absent a vision of peace for its peoples, even after the territorial disappearance of ISIS.

Judging the criminals raises a problem where there is no agreement on the crime, its breadth, its sponsors and accomplices – all minimum requirements to delineate the contours of a Tribunal to judge them. Hence, it is no longer an agenda priority. And Putin will certainly not attend to it.

However, raising the question in the way the Kurds have done means placing the question of Peace at the forefront, as one must in order to establish a common pact for peaceful living in the Middle East.