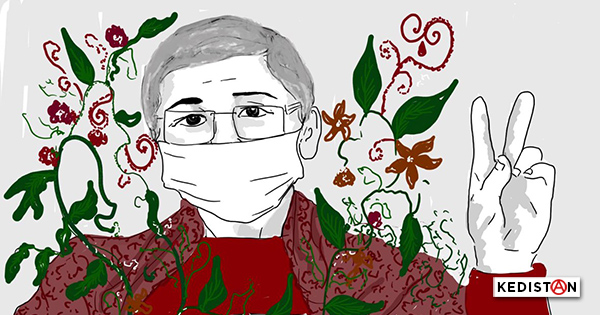 Does the silence, arrogance and violence of a regime justify that one sacrifice one’s life through suicide? Those in Turkish prisons who have put an end to their days did not consider the question in this light. They put an end to their life as did Mohamed Bouazizi in Tunisia, Jan Palach in Chekoslovakia, Qang Duc in 1963 in Viet-Nam…

Suicide is a chosen modality for the end of life, one that leaves little room for indifference in survivors. And yet, who remembers the hundreds of immolations by fire recorded in the past ten years across the world, and their motivations?
Human history only retains a context and the catalyst of the sacrifice of a human life, done in order to upend the course of events.
Will the same hold true for these Kurdish martyrs toppling into death?
Are hunger strikes and suicide equal as means of struggle?

We know that the Kurdish movement drew lessons from the deaths from prison hunger strikes in the eighties and in the year 2000. Their leader Öcalan had personally paid tribute to their sacrifice, but had also preferred that fighters stay alive for the struggle.

Leyla Güven who initiated the hunger strikes, pays her respects to those who have thus died in prison, but does not associate with what appear as ultimate acts of despair.

Outside her person, no one could launch this appeal not to die for the torturer’s pleasure.

On the 137th day of her hunger strike,
Leyla Güven sent an audio message on radio Dengê Welat

The same treatment was applied by the Turkish regime for the funerals of all three young people. The police confiscated the bodies and surrounded the cemetery. Only family members were authorized at the burial.

Meanwhile in Germany, Uğur Şakar, grievously wounded following an attempted immolation on February 20, did not survive and died on March 22. Also in Germany, during a visit by Erdoğan, Ümit Acar had also self-immolated on September 27 2018, as a protest against Öcalan’s isolation.

On March 25th there was confirmation of a new suicide in Mardin (Medya Çınar). Medya Çınar who was among the people arrested during the curfew in 2015 in Nusaybin, was awaiting final sentencing along with 42 other persons. During the five hearings, Medya had mentioned in front of the media the tortures to which she had been subjected.

Once again, the people have said “we will not accept life in isolation”. The isolation imposed on the leader of the Kurdish People is an isolation that targets all of us.

The rulers have seen the millions who took to publics spaces during Newroz. I am one hundred percent convinced they are trying to figure out how they will get out of this one.

Comrades, we have entered into a new phase. We have only a short way to go for a result. I see this and say in all sincerity: let us form a circle around the strikers, a circle of hope and will. Because victory is near, we will win one hundred percent.

I wish that our comrades pursuing their strike in the jails may conduct their action to the end, with morale, enthusiasm and serenity. Those who are not on hunger strike must gather round them.

I bow down with respect before the actions of our friends Zülküf, Ayten and Ugur, who wanted to break the silence in a spirit of sacrifice. But I would like to say the following: each comrade who commits these acts takes away a part of my body, of my spirit and of my heart.

We show our respect before these actions. But I wish to say that we already have an ongoing action. We are already in action and are nearing the result. We must take our places around the strikers. We must not start “new actions”.

Sacrificial actions are very precious, we cannot interpret them, but these types of actions were also taken into consideration by the Kurdish People’s leader on numerous occasions: “You must hold life before you, not death”, “You must lift up your struggle for dignified living”, “you must elevate the struggle, not by putting an end to your life, but by all other means.”

Friends, for these hunger strikes which have found an echo across the world, for this action which is a first in history to obtain results, we must gather up our strengths. This is our objective. For this reason, I pursue my action until this day, with morale and enthusiasm.

More importantly, we must hold together with our comrades in the prisons. We must reinforce and encourage one another. For this reason, I make an effort to live every day, to be able to continue living, in order for us to break through the isolation together. Let us celebrate this day together.

And for this reason, I take care of myself, of my life. I ask you to gather round hunger strikers and not to perform sacrificial actions. They weaken me. Whatever is done reaches me emotionally and makes the weight heavier to bear. I cannot move forward that way. I hope that my comrades will act like this and that we will succeed.”

The struggle of the Kurdish movement which dislocates the organized reality of the Islamic State, and that may find itself abandoned by the so-called “international community” concerns us. All of us have saluted the heroism of their fighters, fallen against the ISIS barbarians, and mostly in order to defend a project for the future. We have all followed by proxy the involvement of international volunteers, even in small numbers, by their side. From deep within our nonetheless so-called democratic states, we have followed the birth of the democratic political process in Rojava, now threatened by the current geopolitical context in the region. We are not ignorant of the fact that the Kurdish dilemma, in the face of international treasons and threats from the Turkish regime, will have to choose the life of the peoples of Northern Syria in biased negotiating conditions…

But that does not give us any right to judge acts of suicide for a cause. We have only one word as friends of the Kurdish people who have, it seems to us, always fought the forces of death, in order to give birth to the fire of life.