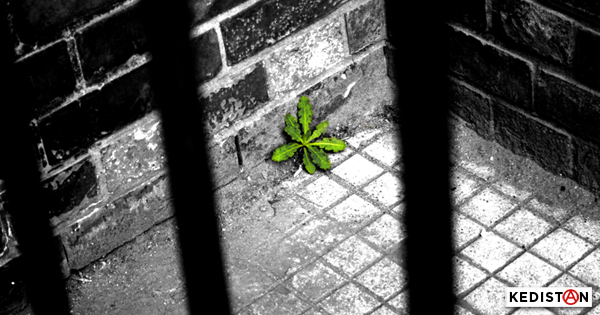 Leyla Güven has just been transferred from the jail in Amed to the larger one of Turkey. In reality, this is one way to attempt breaking down her resistance.

I’m not the one who says this, she says it herself in a text that she had published by the HDP (People’s Democratic Party) of which she is a deputy, elected at the last legislative vote.

I was able to read it. Here are a few excerpts of her words:

“Leaving my cell in Amed [Diyarbakır], the place where I began my struggle was really hard for me… It was as if the soul of past resistance impregnated those walls [Zülfikar Tak’s drawings – In French]. When I began this resistance, I truly felt this spirit, like a reminiscence of the experiences and the words of friends who lived through that period [of the 80s and 90s]. I have been pursuing this action for 81 days. I had very good support in jail. But since yesterday [January 26], I feel as if I am cut off from that spirit. I try to push this feeling away. Nothing seems natural to me in the outside world, be it the air or the water, it’s as if everything was more natural inside. As I said, it’s a rather strange state of mind…

A two-bit psychologist would talk of a syndrome…

But since I’ve read this under someone else’s pen, that of journalist and artist Zehra Dogan (who was recently one of Leyla Güven’s co-detainees before she was transfered to another jail in Tarsus) and seeing as she spoke about it very well, I’ll share this with you also:

“The other day I went out to the hospital. I was looking through the tiny window in the blue Ring (prisoner transport vehicle). I looked at the people. They were rushing around. Life goes on. But curiously, I felt no nostalgia. I even felt pity and was saddened over them even more. I said to myself ‘these people are not aware that they are prisoners”. The only difference was the fact I was in the blue Ring with handcuffs. I did not wish to take the place of a single person who was walking down the street at that moment. They were also handcuffed but they did not feel it. It made me feel funny. Moving slowly under the grey sky through the suffocating and frozen streets, in the mass of people with frozen expressions and empty skulls, at that moment, I wished to get back to jail as soon as possible…”

And when she speaks of jail and of its common “spirit”:

“…and, once again, we are together in the early morning. I don’t know exactly how to describe this, but it is a time when Ipartake in one of the most profound and beautiful exchanges in my life.

It is a climate in which everyone, from the mothers to the youngest, the political ones and the artists, journalists, teachers, city hall employees, factory workers, all the way to the field workers who handle the billhook, pour their thoughts together, in all equality, as if they were contributing to a collective source of knowledge. We feel as if we pour in all our knowledge and obtain a new alloy. And we close off our exchanges, each one taking the maximum from them, and storing our portion away in our kit bag…”

And even if she seems to be exaggerating when she writes again on the “barbed wires” :

“Plain barbed wires. Objects the very name of which sours our face and makes us say “how lousy”. The object used to mark frontiers, divide, define spaces and which, when we overstep those limits, punish us with their pointed tips.

Bathed in moonrays, their shadows scatter on the walls of the promenade, like dancing women. They shine even more, the lifeless barbed wires, sentinels to my condemnation”.

She is also the one who said to her co-detainees, during her “preventive” imprisonment in 2016: “the journalists are in jail, so let’s make the papers in prison.” And they set to work with all the risks of disciplinary sanctions that might follow…

The question arises of what is the exact nature and meaning of the word “free” in Turkey.

You see, for once, I’m talking seriously.

Here I am writing about this condition of freedom under surveillance for the citizens of a liberal “republic with an Ottoman vocation” that will soon celebrate a century of existence in 2023 without once acknowledging the genocide from which it was born. A genocide it carries around like an ornament, as a symbol of its basic identiy, so totally does it continue to negate the mosaic of peoples that shape it.

And you will understand that I, a white Turk raised in this “Kemalist tradition” who, in her youth like the great majority of those who could take advantage of the social elevator, considered freedom as the freedom to undertake, the Turkish Nation as her guarantor, and the illusion of a secular society as an excuse to support it, you will understand that the words of those prisoners are of concern to me, so closely do they match my current open eyed daily feelings. And when those words escape out of the jail in Amed, a symbol if ever there was one of the carceral universe and of the repression against the Turkish Left and more specifically the Kurdish movement, you will understand even better how they question my illusion of freedom, if such still existed. You will also understand why I rage when your press “correspendents” here in Istanbul or Ankara keep on using the word “democracy” in your papers as a qualifier for our autocracy. No doubt they are serving up those elements of language for your Munich-inspired European leaders.

Turkey is a territory where freedom under surveillance has become fully constitutional.

But if I still know how to read, Leyla Güven does not only denounce this similarity between the exterior and the interior of prisons. She underlines an important difference between the resistance practice inside and the quasi renunciation on the outside.

The syndrome would not be located  where one thinks it is, Monsieur the psychologist…

A reminder in passing: she is maintaining her hunger strike begun on November 8 2018, thus in its 86th day today…

Perhaps it is still time for this statement, that the huge backsliding of freedoms, now codified in a constitution at the service of a single and centralized power, guaranteed and protected at the same time by the nationalist forces of repression and the corset of bigots, has settled layer after layer on our history, transforming this Turkey into an indigestible fascism-inspired börek.

Even to the extent of pseudo institutions that subsist like so many denials of democracy. Leyla Güven is an elected member of a national Parliament where a limp Kemalist opposition, nationalist grey wolves and militarists, along with the bigotted and corrupt Ottoman businessmen of the President’s party rub one anothers’ backs. As for her own party, the HDP, it has been reduced to a shadow since a major part of its elected members, supporters and militants are either in jail or on their way there, so that it can no longer do anything other than keep tallies, receive threats or take direct hits.

So for the upcoming municipal elections, can we truly believe in the miracle of the loaves and the wine? The nationalist weddings are not in Cana. MHP, AKP, Good Party or CHP are more into sharing the messy porridge rather than resisting in the name of freedom. The HDP serves as their common target.

This electoralist, nationalist and clientelist atmosphere, also acting against the spirit of resistance, is probably also what made Leyla say after leaving jail “it’s a very strange state of mind.”

The AKP ideology of permanent repression gets the better of the best of them, or locks them up, while the fool’s game of  democratic illusion has long caused everyone to forget Gezi. Fear and repetitive purges take care of the rest, like so many “red flags”…

But what is the point in writing “Entrance” and “Exit”, if Turkey is a carceral labyrinth of which even Kafka could not attempt a description.