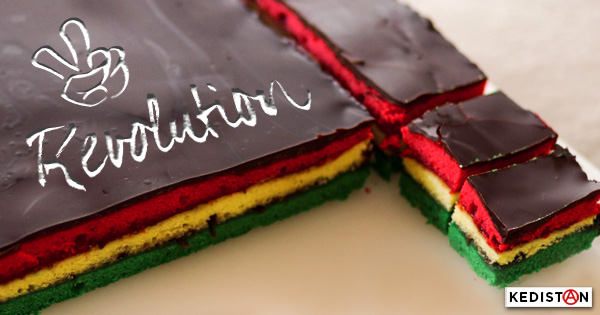 A smell of vanilla comes from the kitchen. A tall young girl enters the living room with a cake. She tells us laughing that she burnt it. Her name is Hevi. She serves the cake onto small plates. We are eight women, some sitting on a sofa, some sitting on the thick carpet. We eat the cake trying to remove the burnt bits and drink tea despite the scorching heat. Opposite to me there is a woman busy stitching cloves on a thread. The woman sitting on my right is Mizgin, her name means “good news”. She must be 50-55 years old, like my mother. She speaks very softly, even when she is making jokes. She asks me questions about Swiss politics. She is interested in the popular initiative system. As I start explaining, I realize she knows more about it than I do. Hevi asks me about my family. We watch pictures on my phone, of my sister and her child, a group of friends hiking, making funny faces. I watch the portraits on the wall opposite to me. Hevi points at one of them to the left. Her name is Zelal, she was only 21 years old when she died. She was studying to become a teacher when the war broke out. She decided to join the women protection units, the YPJ to defend her city against Daesh. She was martyred when Daesh attacked their position.

The siege lasted for about 4 months. The world was watching. No one believed the Kurdish militia, armed with their old Kalashnikovs would be able to fight back. But Kobane was liberated. It was less than 4 years ago. It was liberated by Zelal who wanted to be a teacher, by Hevi who burnt the cake, by Mizgin who is as old as my mother and by their friends. It was liberated by housewives, office workers, mothers, lovers, women who dreamed of travelling the world. They don’t look like soldiers or like the female warriors from the movies. They look like my sister or my friends. They don’t like to fight and take no prestige in knowing how to shoot. It is their spirit of sisterhood that led them to take arms. It is their love for their community, for their neighbours that inspired them to fight. They fight so that their 12-year-old sister won’t be forced to marry, so that the opinion of their mother on political issues will be taken into account. They fight to defeat the patriarchal mentality that has been enslaving women for hundreds of years, brought to such an extreme by the Daesh gangs.

The woman sitting opposite to me has finished her cloves necklace. She smiles at me and attaches it around my neck. There is something totally mystifying in the way the YPJ fighters opened their house to me and fed me cake. As soon as I came in the door they treated me like a sister, a comrade. They asked my opinion about some issues faced by their organization, about what one of them called the “bureaucracy of the revolution”. They embraced me, made me feel like this revolution was also mine. They consider it their duty to welcome anyone who expresses solidarity with their struggle. Their attitude felt almost candid. I felt like telling them to take care. But the Kalashnikovs leaning against the wall reminded me that they know how to take care of themselves. I thought they must be dreamers to believe that they can change the world. But how many of us are crazy and brave enough to pursue this dream and fight for it?