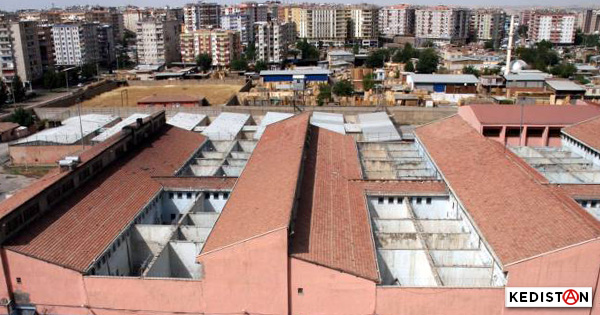 A forced removal measure has just been taken by the Turkish State against Zehra Doğan. She has been sent to the sinister prison in Tarsus.

Artist and journalist Zehra Doğan, jailed since June 12 2017 in Amed, following a sentencing to exactly 2 years, 9 months and 22 days in prison, and having already done 141 days of pre-trial detention, could hope for a liberation by the end of February 2019. We have just learned that she was separated from her co-detainees in the women’s quarters of the jail in Amed (Diyarbakır) and sent to the detention center in Tarsus, one reknowned for its violence, its repression and its violations of prisoners’ rights.

The prison in Amed is not spared by repression but the political prisoners can benefit from some support due to the fact Diyarbakır is a historical center of Kurdish resistance, depite the fear and divisions instilled by the regime since 2015/17. Zehra could benefit from this relative support locally, and especially from the proximity of her family. This removal measure is a de facto sanction and an attempt to cut off Zehra from her close ones and the links of solidarity, no matter how tenuous, thus obliterating the presence of any encouraging entourage.

Zehra is not the only one hit by this measure which was taken without prior warning to her family or her lawyers. For those of which we are presently aware, they involve the following: Nezahat Şingez, Sevgi Altınel, Zehra Doğan, Gülten Orak, Hatice Ay, Sabiha Turan, Sakine Bozkuş, Maşallah Dağ, Halime Işıkçı, Mehtap Yılmaz, Meral Temel, Evindar Aydın, Bahar Avcı, Ayhan Akgül , Saadet Ergin, Özliyet Filizer, Rukiye Bakış.

The prison in Tarus is known for its violence, accompanied by the abuse and harassment against prisoners that marked the year 2018, among others.  The proportion of male guards is very high in the women’s quarters, marking this jail as an acknowledge pilot-prison in matters of repression. It consists of isolation cells and extremely restricted quarters (3 or 8 people). It is under military discipline and, as elsewhere, the use of the Kurdish language is not tolerated in public. (An interview done with Zehra in September 2017 spoke of this problem already: “Zehra Doğan – Reporting from her prison with Sara Aktaş” Click to read).

Even if the town of Mersin has an important Kurdish community, the region is mostly nationalist (AKP, CHP, MHP). These three political formations are the ones fighting out control of the region at the next municipal elections…

For Zehra’s family, the distance of some 600 km will seriously restrict visiting possibilities. The same will hold true for the other prisoners, five of which are severely ill.

Crowding in the Amed prison is the reason invoked for this “transfer” in the vehicles known as “rings” and which constitute a veritable ordeal, notably for the sick. The transfer was done “illegally” since neither the lawyers nor the families received prior notice. All of them learned of them by word of mouth or thanks to the vigilance of friends…

Transfers of prisoners frequently involve strip searches. Testimonies received from the prison in Tarsus at the beginning of 2018 mentioned this as a common practice.

Thus, it is urgent to bring to light what  constitutes yet another infringement to the fundamental rights of these twenty prisoners. And demand an immediate ressumption of communications with the families and lawyers as much for Zehra as for the others on whose behalf,  until now, she could testify thanks to the cross-border solidarity that has sprung up around her.

In the coming days, Zehra is to receive the prestigious prize of “courage in journalism” in the United States. Those offering her this prize must make it a point of honor to denounce this  new development, and bring it to the attention of the public. We invite PEN Club International and its various sections that support Zehra, to “make noise”, as well as for Amnesty and associations of journalists, so that this forced removal does not allow the Turkish regime to reduce Zehra into silence.

Share this appeal for help as much as you can. Any  isolated prisoner  in Turkey is in danger. Avoiding anonymity when faced with a repressive measure offers a minimum of protection. Demanding immediate resumption of communications and visits must constitute the most urgent matters in the coming days.

Even if Turkey is a vast prison for many, we continue to demand the liberation of our friend Zehra !

PLEASE NOTE: None of the correspondence sent to to the former address in Diyarbakır prison will reach Zehra.