Zehra Doğan has been in jail for one year 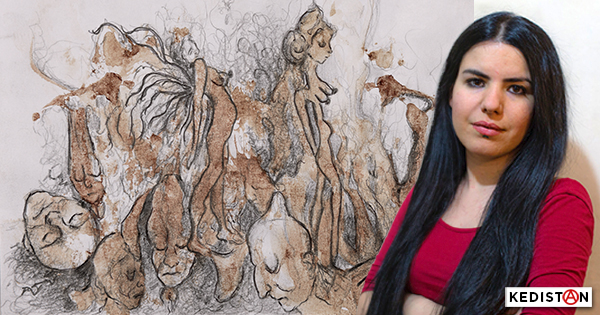 “I don’t know why they put us in jail, we come out stronger than before”. This is what Zehra Doğan said in 2016, when she had been released for a short period from the prison of Mardin, waiting for her trial, after 141 days.

During these 141 days in prison, she had access to artistic material, so she created a collection of artworks, which were exhibited in Amed.

WORKS FROM THE PRISON OF MARDIN
Photos ©Jef Rabillon

When she was certain that she would be sentenced to prison for “terrorist propaganda” after a hearing and on a charge related to her work as an artist and journalist, Zehra Doğan took refuge in Istanbul, waiting for her arrest order.
She stayed there until June 2017.

On June 12, 2017, a year ago, on her way home, after visiting her mother in Mardin, she was arrested again at a road check.

She has now been incarcerated for one year in the high security prison for women of Diyarbakır (Amed), an infamous prison of disaster. Without a reduction of sentence, Zehra still has 1 year and several months of prison ahead of her.

She had entrusted Kedistan with a large part of the works she produced in Istanbul, hidden in an almost clandestine way in early 2017. These works are now exhibited in Europe, in original format, or for some of them, in the form of reproductions. For example, Zehra’s reproductions are currently on display in Detmold, Germany, at the initiative of the Amnesty International group. In 2017, there had been an agreement with an art publisher to make a book out of it, almost exhausted since.

These original works will be the subject of a new major exhibition in September-October, during a festival dedicated to Zehra Doğan. The program will soon be displayed.

They will be accompanied by others, more recent, never shown before.

And yet, all artistic material is forbidden today for Zehra in her prison. It’s a rule that applies to all female prisoners.

But Zehra keeps drawing. Despite the seizure of some of her works, despite the destruction of others – or the confiscation of natural pigments that she puts up in various mixtures, odorous but effective – despite the excavations, Zehra has not put away her pencils, nor renounced to create brushes. It was even reported that blood was one of the ingredients.

All this may seem like a Sysiph-like struggle, but censorship and repression are partly bypassed, and some “prison works” reach her supporters, we now have over fifty, which, given the censorship, gives a glimpse of Zehra’s continuing creativity.

The so-called “clandestine” works of 2017, escaped from Istanbul, have largely documented the states of siege of the cities in Bakur, and described the reality of the lives of Kurdish women. Journalism and artistic talent are closely intertwined, with particular uses of media. The conditions of creation – in an apartment, complicated and Spartan – had however allowed her the use of canvases and acrylics, as well as torn or tense newspapers. And although a great feeling of emergency is present and rendered in each of the works, their “finishing” is always precise.

We want to mention that all the works of Zehra which arrived in Europe, were also digitized and archived by Jef Rabillon, a photographer from Angers, in solidarity with Zehra.

Here are some examples:

The “prison works”, on the contrary, are of “random” formats, created with “prison” materials and pigments (sometimes blood) and carried out under constraint and censorship, with the complicity of the co-prisoners. Everything that passes under Zehra’s hand contributes to her creations. And when certain works fall into the hands of the guardians, they are immediately qualified as “waste”.

And Zehra develops her graphic research, her improbable mixtures, her prints and her shapes, on unexpected supports. Small and medium formats contain graphic and pictorial research which, although some elements are recognizable from previous works, represent yet another open period in Zehra’s art.

And this art is not a solitary practice, isolated in prison, cut off from the community of prisoners. It is lived, created, executed, protected, in the commune of women in which Zehra brings and receives. It is an act of collective resistance.

Zehra, you know, keeps writing too. She prepares short stories, life stories, and maintains ongoing correspondence, despite the uncertainties and deprivations of mail or communication, sometimes brought as “disciplinary sanctions”. Each letter is an invitation to accompany Zehra in her reflection as a woman, feminist, artist and journalist of Kurdish culture. She also describes the intense intellectual activity of the prisoner community.

And the drawings accompany, illustrate or tell the daily life of imprisonment, which they live in permanent resistance, punctuated by joy and sadness.

Here are some prison works which will be visible during the exhibition of September and October, in Brittany, once again.

UNPUBLISHED WORKS OF THE PRISON OF AMED
Photos ©Jef Rabillon

We could tell you about Zehra Doğan on pages and pages. This woman, a young artist, with her recognizable and assertive style, put in a cage and deprived of basic freedom, under threat, like so many political hostages in Turkey, now sees her name quoted throughout the world as a symbol of oppression in Turkey.

Two years ago, while she was already resisting in the prison of Mardin, she took the liberty to compose and publish a clandestine newspaper, “Özgür Gündem – Jail” with her fellow prisoners; her close friends and her family felt very alone in supporting her. Her name and face are now the subject of publications, letters, and even works of art. The little streams became a river.

But this support – which is now trans-national – is still scattered, an association here, a tribute there, a publication, a prize… with exhibitions organized via Kedistan… and it is not however a simple “reputation” on Google which will weigh in the concrete requirement of her release.

It is time for all the support initiatives to work together, for each to join and strengthen the other. With one year of imprisonment, the demand for her release must be heard, even under the election campaign, in Turkey.

To set ourselves the goal of acting together on an international scale to promote Zehra’s necessary freedom, and with it that of all political hostages in Turkey, is a priority. It is now on the agenda to think together on how to achieve this.

Kedistan – who will continue to ensure that Zehra is exhibited in all forms, and that these exhibitions make the context in Turkey heard of – therefore calls on all associations, artists and goodwills, to make their support converge, as was once the case around Aslı Erdoğan, now free.

Zehra Doğan is a “hostage” journalist and artist. So we are not asking for a favour, but for the end of her imprisonment.