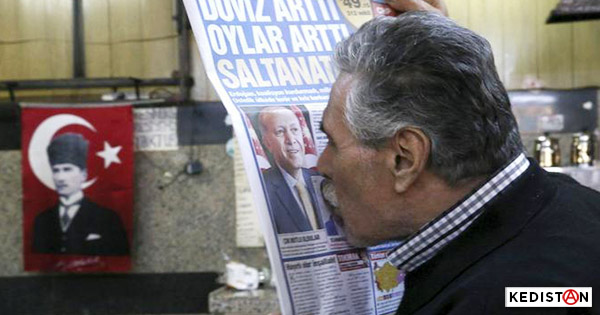 This should cut down on paper costs…at least on paper. Because the acquisition of the main media group Doğan Medya by a close relation of the Reis won’t mean an end to ads for the regime, quite the contrary.

I’ll always wonder why the President is constantly on the campaign trail.

He criss-crosses the country with cameras and hacks on his tail, who then pass off their travel souvenirs in the wake of the Reis on national television, on the other channels and even when the screen goes blank, it seems, so much does the Reis’ portrait seem to be overlaid on everything…

He was still short a few newspapers, I suppose…

At the same time, he shuts down yet another, just like that, Özgürlükçü Demokrasi, that was still emerging from the pile. Apparently, it had revealed where the town of Afrin lies…It’s in Syria, it seems. Following which the Ministers who clamor “we’re at home, here“, had some explaining to do…

I also heard that a French President notified Erdoğan he should adjust his GPS on this matter.

Erdoğan answered. I didn’t listen to all of it, but I learned that the French President is “short”… Diplomacy has its secrets.

In fact, I don’t feel like laughing over all this. Every day, my country digs itself deeper and deeper into obscurity and blood-mired mud, and instead of reaching out to us who are drowning, your governments hand over money to the one pushing our head down into the muck.

I have no cause for complaint, compared to those who are under the fire of our “liberation forces”. Every day, I have a new color photo of the Ottoman Atatürk to replace my toilet paper and ads for “Turkish products” between two spots on Erdoğan, plus the Bosphorus is still there for the tourists.

Yet there is still a novelty for Turkey…

In order to convince me to use it, I had been told that the internet was like a pipe in which everyone introduced information they wanted to show to others. Like a big world-wide telephone with pictures. In practical terms, I soon discovered it wasn’t that simple and, most of all, that there also, everyone wanted to colonize his share of the pipe. In summary, I soon understood that internet was like all the rest, in a world-wide version. If I’m still there, it’s because I’ve also understood that raising my voice on internet   didn’t have the same range as doing so on my balcony.

Funny, I get the feeling the Reis has understood that too. So, they voted…

On the sly, the Parliament voted a bunch of things to place internet in Turkey under the control of a “regulator”.   For instance, video services will be under the control of the High Council on Audiovisual (RTÜK). Platforms will have to request a licence, with a police investigation and everything. Whoever says police says MIT (Turkish Intelligence Services)… The Council will keep an eye on all that. Within 24 hours, it will be able to block “websites” that will go on providing content with a licence. This means the kedi could be banned in Istanbul, which would be the last straw…

Erdoğan will also kill the birds, the tubes and things that start with the letter F, if they don’t stay in line. In order to spare them, maybe he will ask them to pass on all the “confidential data” lying around… It happened elsewhere, didn’t it?

When I look around me, I don’t see what can stop all this, other than a crack that would re-open at the exit of the Bosphorus. 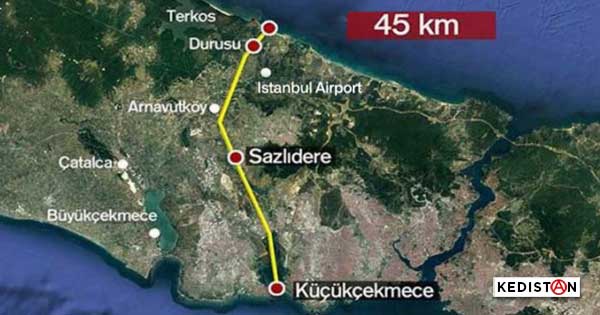