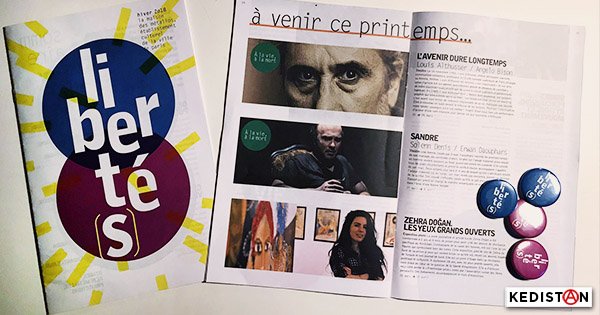 Three exhibitions are ending, another one is upcoming in Paris. Each time, Zehra Doğan’s free and collective words hit the mark as the free part of her speaks out from her prison.

The works exhibited in her absence have led, in the country surrounding Morlaix, in Angers or in Graulhet (Tarn) to a strong raising of awareness of what is going on at the doors of a business-based Europe.

Drawing, painting the unspeakable, with eyes wide open, given Zehra’s talent, is not speechifying, but touching the intimate part within, the area still sensitive under a shell of indifference or individualism going so far as to deny reality.

And since we must do an assessment, we may as well give our readers the benefit of some details.

These three exhibitions which drew some 3 000 people in Angers, in the country of Morlaix or in the Tarn, were accompanied by films, round tables and debates. And the book “Les yeux grands ouverts”, which sold some 300 copies during these January events, allowed for further documentation yet on the context for this solidarity campaign.

This was also the opportunity to meet Kedistan readers, of course. Many of them.

Our exchanges, during the “guided tours” for instance, showed us how Zehra provides documentation and archives, so to speak, for the period of massacres that runs from 2015 to mid 2017 in Turkey. The newspapers she sometimes uses as canvas are a testimony to this, and Zehra’s artistic power does the rest, without pure discourse ever taking over, and without tenderness and profound humanity ever being absent. She prompts us to understand, become informed and act. Her testimony is important, in this period when Erdoğan is bombing Rojava in a climate of international indifference and cynicism.

And when a visitor takes pleasure in recognizing a references to drawings, paintings or memories of readings, Picasso, Chagall, Munch, very quickly this complicity fades at the sight of the pain in another stroke, calling attention back to the urgency of ongoing massacres.

Zehra’s words on canvas lead back to multiple and collective questionnings. And rising out of the simple empathy for the defense of “freedom of expression”, tongues loosen and question the inhumanity at the service of powerful ends, and of a globalization all end up by naming as the triumph of a capitalism acting as a planetary predator of all common life. And then, each and every one takes stock, often astonished to have gone so far, under Zehra’s caged smile.

Exhibiting Zehra’s work is a profoundly political act, as well as providing an archive of the recent history of Turkey and of the Kurdish people.

But it is also a way of giving access to seeing and hearing the strength and artistic talent of a 28 year old resistant. And of a true artist.

The exhibition in Paris is now confirmed. It will take place from March 20 to April 15 2018 in the cultural center of the “Maison des Métallos”.

Here is the program, still being finalized:

Over 70 original works will be presented to the public. Those of the period known as “clandestine”, the “escaped works” as well as some from the current jail period, also done in clandestinity with precarious means under conditions of imprisonment, at the risk of incessant reprisals.

Several initatives, still being finalized, will accompany this presentation:

Round tables… dealing with journalism, the women’s struggle, the roots of contemporary Turkey, Rojava, support networks…

The presentation of the book, “les yeux grands ouverts“ which, from Zehra’s logbook to the escape of her works, accompanies the exhibitions and tells the genesis of the support campaign (also containing the description and visuals of the works, whether on exhibition or not).

And, of course, guided tours of the exhibition, with visits aimed at school groups…

A strong awareness campaign concerning the conditions imposed on the many political hostages in Turkish jails, and on the disinformation since 2015 on the massacres commited in Turkish Kurdistan, an analysis of conditions in Turkey, on Erdogan and preceding Kemalist regimes, a reflection ofn the political project in Rojava which the Turkish offensive aims to destroy… So many contextual elements that circulate with these exhibitions, like a butterfly effect.

It is clear that these exhibitions provide Zehra some international protection, and, by ricochet, to all of her co-detainees as well. They allow information to circulate concerning the situation of all hostages behind bars in Turkey, or placed under constraint by the regime.

But these exhibitions also make known an artist, more than a budding one who, at 28, faces a probable future in exile…when she leaves jail, an outcome for which we are fighting.

Once again, a huge thank you to the team greeting us at Maison des Métallos, as well as to PEN Club International whose sections now champion Zehra, to the few journalists who commit themselves at her side, to the Amnesty sections and other associations supporting her…

In order to envision an optimistic outcome, we count on a growing international movement of support through the sharing of this campaign on social media and through your organizing, especially through associations, solidarity initiatives to which Kedistan will glady provide logistical support. See HERE* for how to do so. (* in english soon)

Last minute: The “La Maison des Métallos” cultural center did not deign pursue the project, its management finding it in the end too “sensitive” to their liking for a cultural venue. It is therefore canceled … 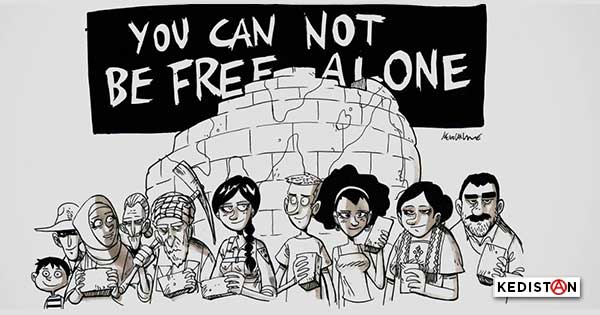