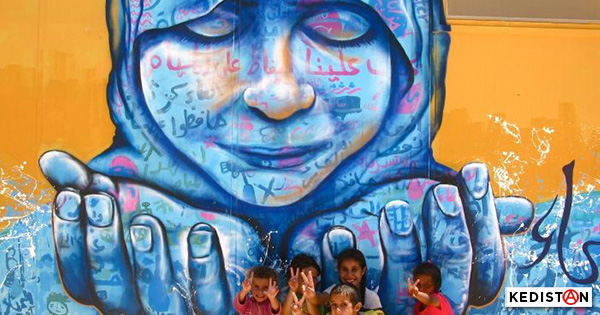 Written by Ermira Kola, translated from the Italian to French by Sylvain Bianchi. The English version is based on the French translation by Renée Lucie Bourges.

Flight from war, indifference of the rules

In May 2015, I attended a training course titled “Asylum request and trauma”. For minds more open and informed than mine, this would have amounted to discovering that water makes you wet, but this is when I learned about re-traumatization.

And that it can re-occur any number of times. In October of that same year, I met Lala. Lala is six years old, with a luminous and penetrating gaze, a tuft of black hair and small feet in constant movement.

Lala has two brothers. Lala had four brothers and sisters, only two years ago.

Lala was born in Kirkuk. Do you know where that is?

In Kirkuk, two years earlier, Lala had lost his only sister. Maybe he doesn’t even remember her. I imagine a grown Lala, searching his memory for fragments of this sister he lost in the war.

Then Lala lost his house. His parents took him far away from the war.

I don’t know on which roads they travelled, but I know they made it to Sweden where Lala lived for approximately two years. During those two years, he learned a lot of words in Swedish, he loves reminding me that his name resembles the word for “ant” in Swedish.

One day, his parents took Lala and his three brothers away. He doesn’t know why. I don’t know how, but I know they arrived in Bolzano.

It was cold in Bolzano, “but not as cold as in Sweden”, Lala tells me with shining eyes.

In Bolzano, we are so particular that we have our own laws, square and upright, laws that circle round and round, infinite rules for games of Snakes and Ladders in which everyone loses.

Because of one of those circulars, Lala first slept in the street, then on the floor in a center for minors, then in the hall of an emergency service, then in a hotel.

After which he lost his second brother. During this second of his wars, our silent war of Occidentals, filled with senseless roundabout rules. Lala is six years old, he has already lost one brother and one sister. He has already been forced to abandon two countries.