Turkey • Humanity calls for help through the window! 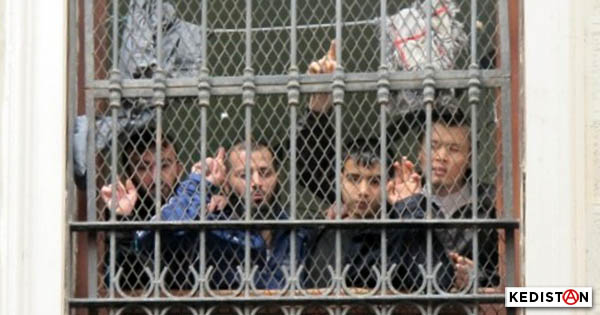 “Turkey is a safe country”. This is what European heads of State keep stating in order to justify the agreement for “the retention and exchange” of migrants and refugees. A refutation must be made of this denial of reality.

Everyone is careful not to look too closely on what is going on for a number of foreign migrants in Turkish territory, now blocked there because of the agreement.

The “sub-contracting”handed over to the Erdogan regime takes on several aspects. For Syrian refugees, all depends on the family’s income before they left their country, their geographical origin (zones with a Kurdish majority…) which translates into total abandonment and impoverishment for the great majority, and “economic integration”, either as cheap labor to be exploited at will, or as “new investors” for a tiny minority. This is more or less the case in the countries bordering Syria taking in millions of persons, with an added political instrumentalisation that is specific to the Turkish regime, both at the interior level and in terms of the blackmail exerted on the EU. We must also reiterate that Turkey has become an open-air prison for all opponents who are denied the right to leave the territory, an arrangement that suits a lot of people…

The rise of nationalisms stoking the hatred of strangers, and vice-versa, in parallel to the situation of refugees – mostly of Syrian origin – attempting to survive outside the camps and centers is becoming worse and worse. Exploited as cheap labor, threatened with assault, notably of a sexual nature for women, they are increasingly the victims of attempted lynchings. Just as human rights associations have been doing, Gülsüm Ağaoğlu, member of the HDP’s commission on immigrants and refugees sounded the alarm in a press release published last April 25th, following a nth lynching attempt, this time in the Adanalıoğlu section of the locality of Akdeniz in Mersin, a Mediterranean town.

Eviction of refugees from the homes sheltering them can only be interpreted as support to an atmosphere of massive lynchings. We denounce the fact that the victims of these local attacks are wronged through mass exile. We call upon all social classes and Rights organizations to be sensitive to this subject.

In the hate crimes of xenophobia, one of the manifestations of racism that can degenerate into lynchings, the political role and responsibility of the AKP government is clear in its transformation of refugees into a target for threats and blackmail.

In our country, undeclared workers with no social security and Syrian refugees working in even worse conditions, find themselves facing off in agriculture and other labour sectors, where they are forced into cut-throat competition. Turkish workers and refugees must benefit from the same conditions, and work conditions where no rules, no declaration and no security exist must be changed.

Once again, we reiterate that the AKP government’s policy on refugees, devoid of all human ethic, beyond the utilization of Syrian refugees as an asset and a bargaining chits leads to their transformation into targets, and the revival of racism, when needed.

But Syrian refugees, as war refugees, were not and are not the only ones using Turkey as geographic corridors for migration. The particularly inhuman agreement reached between the EU and the Turkish regime takes into account the diversity of these migrations and has established a pattern of haggling and of reciprocal pseudo commitments. Thus, the EU funds the expulsion of “undesirables” who do not have asylum as a “vocation” , as the saying goes. Therefore pseudo “triage centers” become de facto “removal” centers, and nothing other than plain concentration areas for undesirables, where all means are exercised to impose a forced return.

In order to complete our questioning on the issue, here is the translation of an article by Nuray Almac, published on April 29 2017 in Gazete Duvar.

We wished to add these few paragraphs as a foreword so that, once again, this question where everything is settled through perfectly inhuman means not remain an object of teary compassion with no follow-up.

Of course the subject is charged with emotion and indignation, as well it should be, but the defense of human rights also requires a mobilization in full awareness of the stakes, and a political understanding of the hypocrisy of the decisions now being taken.

Here is the article in question.

Humanity calls for help through the window !

What a friend told me after he’d gone for a bicycle ride, concerning noises coming out of the building on the outskirts of town with a sign that reads “Geri Gönderme Merkezi” (literally “Removal Centre”) I found impossible to believe. I told him: “That cannot be, you must be mistaken ?”

Cries, howls, from people leaning out the windows and begging “Help !”

There had to be some mistake. All day, doubts and questions filled my head. Even though it seemed unlikely, I decided to look into the matter. Along with a friend, I took the subway to Izmir’s Egekent 2 neighborhood. Then we took a taxi and asked the driver to take us to the “Removal Center”. He knew the place. We didn’t ride for long before a large building appeared. It was on city limits, but not much further. Beyond, a woman tended her grazing sheep…

“Help us, this is Guantanamo !”

Before reading the entrance of the building, we asked the driver to let us out . And even before stepping out of the taxi, we heard cries that sent shivers down our spines. As if we had suddenly landed in a movie. A horror movie, deeply shocking and traumatizing. The reality was so shocking that the scenes seemed to move in slow motion and, as if torn from our own selves, we witnessed it, horrified. I felt totally helpless in front of these cries for help. With powerless arm movements, I tried to convey that I would be a voice, doubtless a weak one, responding to their cries. Children’s cries mixed into the others, “Help !”, “Food !”, “This is Gantanamo !”

I immediately contacted a few lawyers I know who are involved in protecting refugees. I asked what was the legal status of this building and why strangers were detained there, why they were crying out so desperately for help.

“It’s not how it looks from the outside”

One lawyer who wished to express himself but preferred not to give his name because he has clients under administrative control in this center, told me: “Given my responsibility as a lawyer, I must speak of what goes on in this place.”

The place is the “Harmandalı Removal Center”. It reports to the Ministry of the Interior’s General Directorate of Immigration Administration.

« In fact, when it was set up, it was supposed to be a center where strangers could sign in, enter and leave at will. When seen from the outside these buildings look well kept, even luxurious. But, contrary to this appearance, the living conditions inside are inhuman. According to article 54 of the “Law on Strangers and their international protection (applicable since April 4 2017) there are motives for the expulsion of strangers. If a decision is reached to expel a stranger, “administrative control” is also decreed. Strangers under administrative control are detained in these places.»

“If I let you talk to them, I’ll be transferred”

He also told me what he sees as a lawyer in these centers.

« The conditions in this place are truly jail-like, no just plain retention. My clients tell me they are insulted by everyone, from the floor sweeper to the director, that they are not fed, and that they are tortured. We must wait for hours in front of the door, to keep us from speaking with our clients. With such arbitrary practices, they prevent the lawyer’s for exercising their professional activity. This is illegal, and it is a crime. The immigration advisor told me: “If I let you talk to them, I’ll be transferred elsewhere. That’s the order I received.” While I wait, people pass by, sick people, people with puffy swollen eyes…When I ask about this, I’m told that they fell. You constantly hear howls coming from inside… »

“Conditions are worse than in jails”

The lawyer answered my question “But why inflict such suffering on these people ?” :

« There’s a concept called “voluntary return”. Since there’s a legal ban on “expulsion”, some strangers can not be expelled. By making them suffer, by starving them, by torturing them, they force them to sign the document for “voluntary return”. This is how they force them to go back to their country. These people aren’t howling at the windows for nothing. Even in jail, conditions are better. These people are not criminals. When you look at the (International Law on Immigrants), they are entitled to a lawyer and to an appeal. But laws don’t apply here. We are talking about total isolation. This center is a center where human rights are violated. » 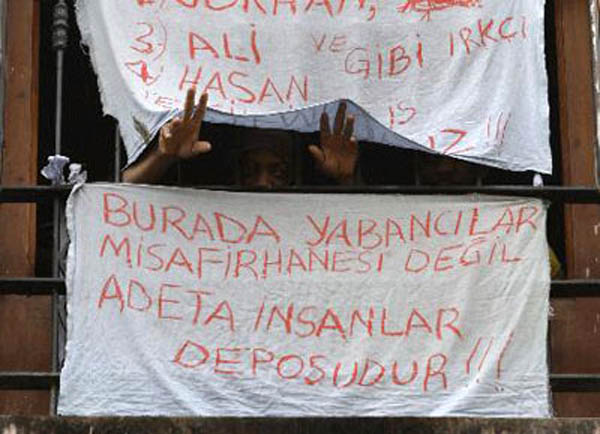 Kumkapı Removal Center Istanbul (still 2011…)
“This is not a reception centre, but a warehouse of human beings”

On paper, protocola exist between the Red Cross and public service associations in large centers such as Adana, Antalya, Aydın, Bursa, Çanakkale, Edirne, Erzurum, Gaziantep, İstanbul, İzmir, Kırıkkale, Kırklareli, Tekirdağ et Van. But there are reports concerning their disregard by delegations representing the European Parliament. For instance, the following summary notes from May 2-4 2016:

Despite the reports, the declarations, the warnings and the whistle blowing, new projects for centers, most of them funded by the EU, continue to flourish in Turkey.

Other than the 18 existing centres, the website of the Ministry of the Interior’s General Direction for the administration of immigration proudly displays the new projects on this document, updated on l 28/02/2017.

In the coming months a new Removal Center for 750 people will open in Van. (Project funded by the EU).

Construction of centers is ongoing in Çanakkale, Aydın, Antalya, Ağrı and Kocaeli. The first three are expected to be operational in the first semester of 2017. The ones in the other towns are at the planning stage.

In the framework of the EU project and treaty, 6 centers were submitted for funding. Discussions are ongoing. Balıkesir, Bayburt, Bitlis, Kütahya, Niğde, Şanlıurfa, (each center with a capacity of 400 people), for a total of 2400. 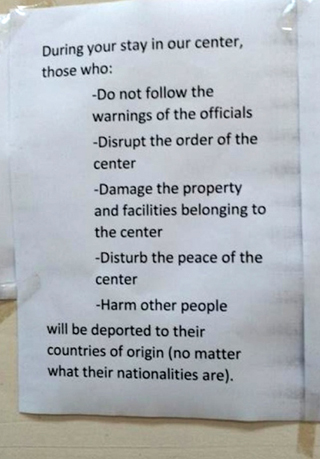 A “warning” in one of the centers…

The list cannot be exhaustive, much of the information is hard to come by or intentionally dispersed over different “studies” or “reports”. Kedistan doesn’t have the EU or the Council of Europe’s investigative teams…

Even so, testimonies concur in describing the inhuman consequences of political decisions reached by heads of State mostly concerned with the rising xenophobia in their public opinions. The “secure” arm to the drownings in the Mediterranean or the Aegean Sea, and to the prison universes on European soil itself on the “closed road of the Balkans” or of Greek incarceration in undignified conditions, turns out to be a funded inhumanity, the crushing of people out of sight.

Visibly, we are capable of forgetting animal suffering in slaughterhouses in order to fill our plates with protein. The distancing and the sub-contracting of that suffering allows us to digest while viewing reassuring images on TV. Even if the comparison with migrants and the “treatment” they receive is daring no doubt, the psychological motives driving the process are the same.

Politicians learned their lesson from the images of little Aylan. Business can go on behind this chain of diluted responsibilities where humanity can only call for help through the window without its cries breaking through the silence. In a Turkey that imprisons or exiles its own population, among which some like Barış Yazgı  end up losing their life through despair on the refugees’ road taken in order to survive, we could not let these noises go unnoticed…Inhuman noises, among other noises of the world.