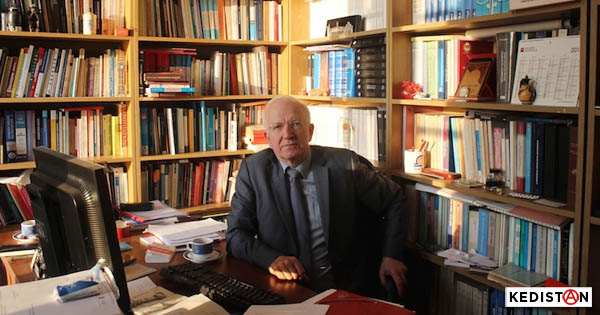 Dr. İbrahim Kaboğlu, a prominent jurist has been put on the list of the academics discharged by the infamous decree of February 7th.

Dr. İbrahim Kaboğlu isn’t just anybody in Turkish constitutional law…His name is among the first to be quoted when the notion of « Constitution » comes up. He teaches constitutional law at Marmara University, he has trained thousands of jurists in Turkey. A human rights defendor and a scientist, he has also taught in a number of prestigious universities across the world.

He has just been dismissed by decree n° 686 of February 7th 2017, like 329 other academics. By this decree, scientists and researchers have been torn away from their work, their university, their students, but they have also lost their seniority, their pension, which for Ibrahim represents forty-three years of energy and public service.

The interview conducted by Hilal Köse of the newspaper Cumhuriyet, clearly brings to light the feeling of revolt these purges raise in the victims. As Hilal points out : “İbrahim Kaboğlu’s sadness is even greater than his anger.”

Of course, the point of view expressed in this interview is that of a jurist defending a “just State”, a State “in the service of all”, a universal justice that the “Turkish Republic” could have embodied some day… a creed we don’t share at Kedistan since it does not take into account the fact that justice also depends on domination and balances of power, at all times and on all occasions. Attempting to oppose to this a simple “universality of human rights”, while not questioning the very foundations of all these “injustices” is a task for Sisyphus, while also pretending that Turkey, constructed against the mosaic of its peoples can achieve such a universality. It is remarkable that after more than a year of war during which Erdogan has achieved the feat of keeping his opposition disunited because confronted by the poison of anti-Kurdish kemalism, we see at last a mobilization from those now feeling the full brunt of the attack. Although İbrahim Kaboğlu signed the petition of University workers for peace, after the failed putsch he defended the necessity for the Kurdish movement to join into the the great national unity movement for democracy, thus aligning himself to what was then the position of the CHP.

“First they came for…” you know the rest. Henceforth, everyone is in the same sinking boat in front of the regime. Let us hope that the February 7th decree will prove to be the universal detonator, both for a NO at the referendum and, most of all, against a pseudo “national unity” that thwarts all possible convergence in the opposition.

Hilal – What are your feelings at this time ?

İbrahim – This kind of practice gives the impression that the « Ottoman-Turkish » advances never existed, that the Anatolian lands have never known the notions of Law and of Human Rights. Consequently, it is impossible for me to describe with words what I feel. Moreover, as an individual who works in the area of human rights, becoming the witness of the practices put forth in these decrees, I feel as if we have almost reached the brink of « erasing the historical and collective memory ». This can also be seen as an insult against the society’s achievement and the accumulation of collective knowledge in Turkey.

Hilal – To this day, you have trained thousands of jurists… How do you interpret this…against a name such as yours ? Some criticized this even within the AKP…

İbrahim – First of all, it is hurtful, degrading. If those using these procedures took aim at their interlocutors or, more precisely, riddled the « ennemy » with bullets, it wouldn’t be as impressive. Think, you have as a jurist, several decades of accumulated experiences, you have struggled to teach notions of law and justice to future jurists… You discover that, in the course of one night, your name has been added to a « pack of law-decrees », created for « the terrorists who attempted a coup. ». You may be sure your heart will go on beating, upon awakening the next morning, if only you have a chance to re-initialize your memory and your past before going to bed…

Hilal – In your opinion, is there a possibility that this dismissal can be quashed by some authority or other ? What would happen if you appealed to the Court, what would be the result ?

İbrahim – Before anything else, the fact that this non-legal decision should not be taken, or should be annulled is even more important than seeing it quashed. The terms used are unacceptable.“If there is error, it can be rectified, if there is injustice, it can be repaired ». These kinds of comments mean that the authors of these procedures doubt the legality of their own operations and the basis on which they rest. Yet, in a State where the Rule of Law applies, each procedure must rest on a legal basis, even in a state of emergency. In a state of emergency the balance between liberty and authority may be undone to the advantage of authoritiy, but the administration under the state of emergency is also a Law-governed regime, with limits as to place, domain and time, and open to judiciary control.

These points also hold for decrees pronounced in the state of emergency. The framework in terms of content and application is found in articles 120, 121 and 15 of the constitution. Each decree is promulgated by the Cabinet of Ministers meeting under the presidency of the President of the Republic. Despite this clear constitutional rule, there is no match between the dates of publication of these decrees and the agenda of Cabinet meetings. For example, the decree of February 7th is based on a meeting that would have taken place on January 2nd. This leaves the following impression : the Council of Ministers meets once, under the presidency of the President of the Republic. Then, in the days and weeks that follow, decrees are promulgated. This procedure is clearly unconstitutional. It raises serious suspicions of a shift of authority, from the political to the administrative bureaucracy… Such decrees under the state of emergency are clearly unconstitutional and contrary to the European Convention of Human Rights. Also, the practice of successive amendments to the laws is a method that makes legal recourses particularly difficult and inefficient, therefore it is prohibitory…

The Imam may express himself, but not I

Hilal – Is it possible that you are subjected to this ordeal because you said « One cannot write a Constitution in a state of emergency » ? The process of modification to the constitution gallops on, the date of the referendum has been declared (April 16 2017). What can be the result, in your opinion ?

İbrahim – The opinion « One cannot write a Constitution in a state of emergency »  finds confirmation with each passing day . If my name was added to the « putsch-terrorism decree » because of this opinion, the legitimacy of the process of constitutional modification becomes even more debatable. To this are added the contextual contradictions. A university director, a prefect, a governor, an imam may express their opinion on the constitutional change, but specialists in constitutional law cannot. Personally, I have never witnessed a « process to modify a constitution without the constitutionalists » as botched as this one. On television screens that remind us of the « pink series » in previous South American times, how many constitutionalists find a seat in the so-called « debates on the constitution » ? This whole situation denies the « constitutional right to information ». Consequently, the results of the referendum will have to be considered in light of this environment.

Hilal – What will happen if the Yes wins ?

İbrahim – The ways and means used for the Yes and which prevent forming a public opinion on the constitution bring worrisome elements on the practices to which we will testify after an eventual Yes… This is why it will not be easy to qualify it as a « new constitutional order » even if it carries a more recent date.

A pollution of constitutional information

Hilal – What are the reasons for this return to previous practices ?

İbrahim – The most profound rupture in Ottoman-Turkish history. But there is no justification that legitimizes this. We can rapidly mention three reasons.

The first: the contradictions in the AKP between the advances of the parliamentary regime and Ottoman-Turkish history ( particularly political and constitutional history).

The second: The contradiction between the 14-year period of AKP power and the thesis claiming that the AKP would now lift Turkey to the doors of « advanced democracy ».

The third: The contradiction between the AKP and its own electoral base : The reports and projects prepared by the organizations close to the Party’s base are rather favorable to a pro-regime parliamentary regime. They are thus unrelated to the content of the constitutional revision project voted by the National Assembly.

Hilal – How do you consider the AKP’s Yes campaign ?

I can’t find the legal term

Hilal – We had discussed this during our previous exchange : When the university circles in France insisted you take up residence in Paris, you said « No »…What will happen to your lectures at the Sorbonne ?

İbrahim – I began my lectures at Sorbonne Nouvelle (Paris 3) last week as guest lecturer for three months. We organized my lectures in Paris over four weeks in February, March and April so that I could also continue my lectures at Marmara University.  I completed my first week, came home, and three days later, with the addition of my name to the « terrorist organization decree » not only has my work of forty-three years been terminated but my passport has also been revoked. This means that, if this decree totally unrelated to law is not rectified, I will not be able to return to Paris, nor to pursue my teaching there. In summary, the President of the Republic, the Prime Minister and the ministers who signed this decree are probably not aware that my name was added to the « putsch  decree », but this generates consequences that deprive me of my national and international rights. I can find no legal term to qualify this penalty.